The president of Brazil, Jair Bolsonaro, entered a hospital in Sao Paulo due to a problem due to an intestinal obstruction, the same condition that led him to be admitted six months ago.

Through a statement, they reported that Bolsonaro was admitted to the Vila Nova Star hospital, the same clinic in which he was before, “due to a picture of intestinal subocclusion”. 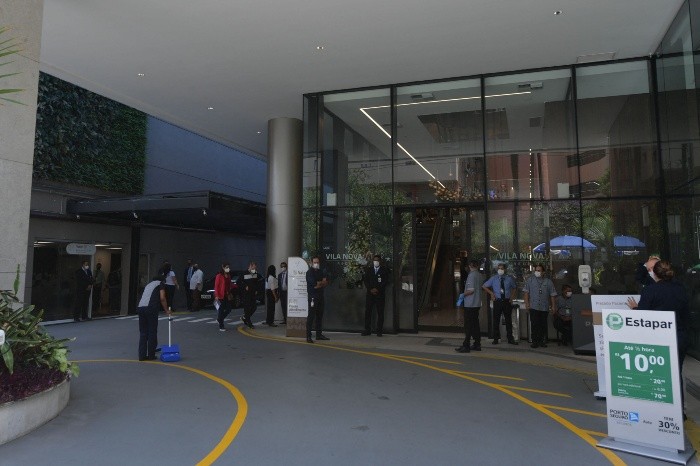 Image of the hospital where Bolsonaro is hospitalized. AFP / N. Almeida

The ruler “is stable, in treatment, and will be evaluated throughout this morning” by a team led by Dr. Antônio Luiz de Vasconcellos Macedo, says the note, adding that there is no forecast on when he may be discharged .

Macedo is the chief surgeon and in charge of the ruler’s health. According to local media, the doctor was on vacation in the Bahamas and anticipated his return to lead the team.

On his Twitter account, Bolsonaro published a photograph of himself prostrate in bed, with a resigned face, making the OK sign with his right hand and with a probe through his nose.

– I started to feel sick after Sunday lunch.
– I arrived at the hospital at 3:00 am today.
– They put me in a nasogastric tube.
– More tests will be done for possible surgery for internal obstruction in the abdominal region. pic.twitter.com/NPgv6HwoHj

In addition, he said that he began to feel ill on Sunday, after having lunch, and that he was admitted to the Sao Paulo hospital at 3:00 a.m. local time (00:00 Mexico time).

“I will have more tests for a possible surgery for internal obstruction in the abdominal region,” adds the president.

Bolsonaro recalls that these problems stem from the attack he suffered on September 6, 2018 when he was stabbed in the abdomen in the middle of the electoral campaign for the elections of October of that year, while he was carried on the shoulders of a group of supporters.

The aggressor was detained immediately after the attack, but was declared unimpeachable, as the judge considered that he was not able to answer for his actions due to his mental problems.

That attack led to four surgeries, but a fifth was ruled out after his last hospital admission in Sao Paulo, from which he was discharged on July 18, 2021.

There is no information on whether this time he will have to be operated on again. The doctor in charge of his health, Macedo, will not arrive in Brazil until 3:00 p.m. local time (12:00 p.m. Mexico time), according to Bolsonaro himself.

The problems arose while Bolsonaro was on vacation in the state of Santa Catarina, southeastern Brazil. The last public appearance was this Friday, in his recorded end of the year message.

The new problems emerged three days after Bolsonaro entered the last year of the current term, which began on January 1, 2019 and will end on December 31 of this year.

Bolsonaro intends to seek a new mandate in the elections of October 2 of this yearBut opinion polls place him a long way from the favorite, the former president and leader of the Brazilian left, Luiz Inácio Lula da Silva.