The world has celebrated the entry into the New Year with celebrations that in some cases have challenged the explosive advance of the omicron variant of the coronavirus, with thousands of people in the streets. Madrid, New York or Rio de Janeiro have been some of the cities in the world where, with reduced capacity and restrictions, people have gathered en masse to welcome 2022. Others such as Seoul, Mexico City or San Francisco, have their festivities have been canceled or severely restricted.

In the Spanish capital, 7,000 people gathered in the Puerta del Sol, 60% less than usual in the square, which usually welcomes around 20,000. The assistants ate the grapes to the sound of twelve chimes, while the accumulated incidence amounts to 2,426 cases per 100,000 inhabitants in 14 days. “It is a large space, security can be guaranteed and it is outdoors”, justified a day before Enrique Ruiz Escudero, Madrid Health Minister, to give the green light to the celebration. 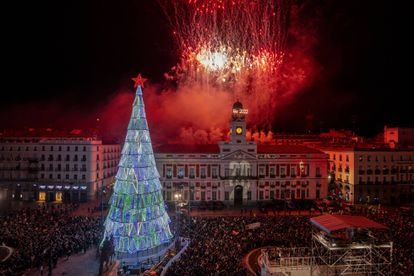 The fireworks, during the New Year’s celebrations at the Puerta del Sol in Madrid.Manu Fernandez (AP)

In Paris, where the incidence is soaring with a rate of 2,287, the traditional fireworks show was canceled to avoid crowds. However, thousands of people strolled the Champs-Elysees, although far fewer than before the pandemic on the eve of a New Year. The police controlled the use of masks, again required to try to stop the spread of the virus, which this week has spread at a record rate in France. “Everything is closed in the Netherlands, so it’s better here. I’ll stay until midnight, ”a Dutch tourist who went to Paris with his girlfriend told the AFP agency. With the entry in 2022, the Eiffel Tower was illuminated with the flag of the European Union, since France has held the rotating presidency of the EU from this Saturday. 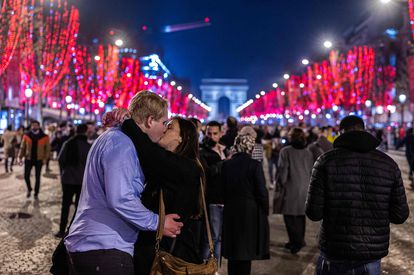 A couple are kissing on the Champs Elysees in Paris (France) this morning.MARTIN BUREAU (AFP) 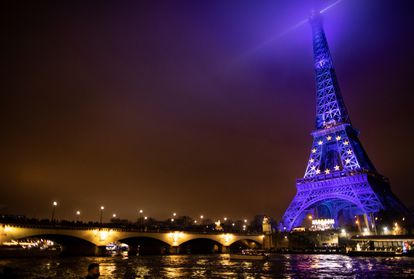 The Eiffel Tower, illuminated with the colors of the European Union flag, this Saturday.IAN LANGSDON (EFE)

In New York (United States), where the records of daily coronavirus cases have been pulverized -on Friday the state recorded 76,500 new infections, 44,000 of them in the big city, where many public services are in check due to lack of personnel-, Times Square had its capacity controlled, only 15,000 people of the 60,000 that usually crowd this space every January 1. They were able to access the iconic square to see closely the descent of the famous ball of colored crystals of more than 5,300 kilos that hangs over one of its skyscrapers, but they had to meet the requirements of a complete vaccination and mask, which were added to the common security protocols for risk of terrorist attack.

“It was our dream. It was on our list of things to see, the fall of the New Years sphere, and we have been vaccinated for this, ”said Chroni Stokes, 27, who came with her partner to New York from Memphis, Tennessee. Times Square attendees like them were unable to enjoy stars like Jennifer Lopez, who performed last year in front of a small group of essential workers. The Colombian reggaeton artist Karol G, the veteran rock band Journey and the singer KT Tunstall took the stage, while rapper LL Cool J, the most anticipated, was taken down for being infected with covid-19. In other cities in the United States, such as Los Angeles, Atlanta or San Francisco, the authorities decided, however, to cancel some of their most massive events as a precaution against the explosiveness of omicron infections. 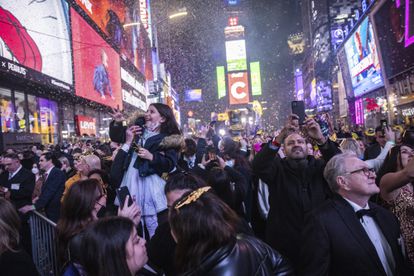 In Brazil, the second most affected country by the pandemic after the United States, the inhabitants of Rio de Janeiro returned to Copacabana beach to receive 2022 although with less public due to bad weather and restrictions due to the pandemic. “I expected to see a lot more people, I expected it to be stressful,” said Alejandra Luna, a 28-year-old Colombian tourist. “It’s calm, I like it,” he adds. Dressed in yellow to attract prosperity, Andreia Viana from Rio observed the 16 minutes of fireworks and commented: “It was exciting, because we spent a lot of time in a pandemic and now that the fires have returned, they seem more beautiful, they are more significant.” 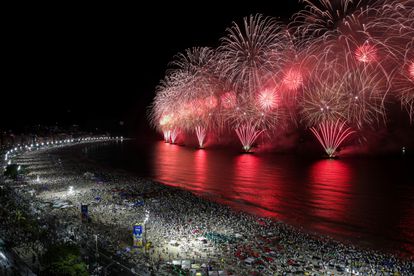 In Sydney, a city that boasts of being the “New Year’s Capital of the World,” crowds were unusually small at the harbor to witness the traditional fireworks display. “I’m just trying to focus on the positives that happened this year rather than the negatives,” said Melinda Howard, a 22-year-old medical student. In Dubai, fireworks at 29 sites lit up the city. The public gathered early in the evening to witness the spectacle of the tallest tower in the world, the Burj Khalifa.