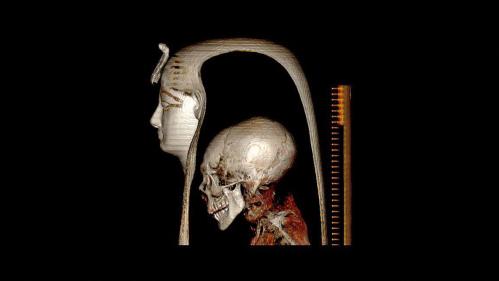 Egyptian researchers have succeeded in discovering the secrets of a royal mummy still in its strips thanks to medical imaging, revealing new embalming techniques launched with Amenhotep I more than 1,500 BC

This pharaoh son of Ahms-Nefertari and Ahmosis I, founder of the XVIIIth dynasty (-1550 to -1292), is thus the first to be mummified with his arms outstretched but also the last whose brain was not removed from the skull at the time of its mummification, said a statement Tuesday from the Egyptian Ministry of Tourism and Antiquities.

This mummy, discovered in Luxor in 1881, is the only one whose bands tightly winding the body have never been unrolled by archaeologists, to preserve its funeral mask as well as the garlands of flowers that surround it like hair.

Computed tomography, the scan of medical radiologists, further reveals that this pharaoh, who led several military campaigns during his 21-year reign, died at age 35, apparently without injury or illness.

This research was carried out by Sahar Saleem, professor of radiology at the University of Cairo, and Zahi Hawass, an essential but sometimes controversial figure in Egyptology. Together, they subjected the mummy to a very advanced 3D medical imaging technique, computed tomography.

Thanks to this same technique, Zahi Hawass and the specialist in mummies, the German Albert Zink, had solved in 2012 a crime of 3000 years old by discovering the truth about the “conspiracy of the harem”.

With a great deal of X-rays and DNA analyzes, they had proved that Ramses III had his throat slit during this conspiracy hatched by a co-wife who wanted to install her son on the throne in place of the firstborn d one of its rivals.