Agriculture concludes the strategy to attract Spain 48,000 million from the CAP 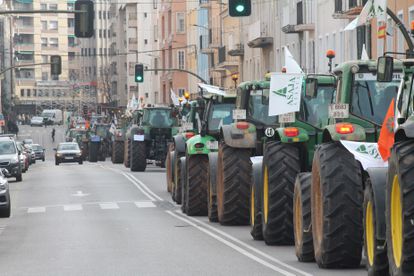 The Government already has ready the strategic plan that will serve to apply in Spain, from 2023, the Common Agricultural Policy (CAP), the mechanism with which the European Union has helped for six decades to maintain agricultural income in the community territory . The new CAP for the period 2023-2027 will arrive late (in theory it should have been launched in 2021, but the previous one was extended for two years due to the complication of negotiations) and with substantial modifications. One of them is precisely the obligation that each country present to Brussels its own strategy, which will be reviewed during the first half of 2022 and will necessarily comply with the general guidelines agreed by the Twenty-seven and the Community Executive with the declared objective of achieving a policy agricultural “fairer and greener”.

The document that the Council of Ministers will see this Tuesday confirms the terms that were agreed between the Ministry of Agriculture, the autonomous communities and the sectoral organizations in the negotiation of the plan. It will be the basis for the distribution of almost 7,000 million a year. Spain must receive 47,724 million euros until 2027, with the extension of the previous regulation in 2021 and 2022. It is an amount similar to that of the current CAP, which the ministry values ​​as “a sufficient tool” for the sector. The bulk will be, as always, direct aid. These will take 4,800 million annually and incorporate one of the main novelties of the future agrarian framework: the so-called eco-regimes or eco-schemes.

Almost a quarter of the aid (23%, according to the plan revised by the Government) will be distributed with this scheme that seeks to favor more sustainable agricultural and livestock operations. Apart from some minimum obligations (the entire CAP establishes new environmental and social requirements, as it seeks to improve the quality of employment in the sector), eco-regimes are specified in a series of practices that producers can adhere to voluntarily. It can be from practicing certain rotations to introducing certain landscaping elements or carrying out extensive livestock farming.

“We have tried to make them accessible to everyone, so that all cultivation areas can benefit from some practice,” explains José Luis Miguel, technical coordinator of COAG (Coordinator of Organizations of Farmers and Ranchers). But it also warns that “those who cannot undertake them already lose that part of help.” Ultimately, the sector fears that eco-regimes will end up supposing a cut. Even for those who end up perceiving them, they are almost always considered as a compensation: the ecological practices that they entail in most cases involve a reduction in production or an increase in costs.

Income support for all farms, the main mechanism for the distribution of CAP subsidies, will now take 60% of direct aid. Ten of those 60 points (that is, 10% of the total) are also only for first hectares because Brussels forces to establish a mechanism that compensates small producers and helps to redistribute the wealth of the sector. But also in the other 50%, the so-called basic income support (roughly, what until now was called basic payment), there are news.

When a farmer is entitled to more than 60,000 euros for this concept, the aid will be progressively reduced. And never more than 100,000 euros will be paid to a recipient (200,000 euros in total per operation, after deducting salary costs and other benefits). It is another way of favoring small and medium producers, since these aids are calculated based on the area of ​​the farm and depending on the agronomic region where it is located. The distribution, they argue in the Ministry of Agriculture, seeks “to benefit those who need it most, which are the professional and family farms that make up the great middle class of the sector.”

The number of agronomic regions is reduced, from 50 to 20. Within them there will be a progressive convergence of aid. The idea is that, as recommended by Europe already in the previous CAP, the subsidies are simplified and tend to be equalized. Spain is one of the few countries that had this task pending, complicated by what in its day were historical rights, which have led to great differences between what some crops receive and others. The Ministry wants all producers within the same region to receive the same by 2027. Until then, the payments to those who receive more and less will be shortened year by year.

The plan prepared by Spain is completed with a reserve of 692 million per year for productions in particular difficulty and reserves 2% of the total direct aid (97 million per year) for young farmers and ranchers. When the owner or co-owner of a farm is a woman, an extra 15% will be received. Social conditionality, a system that will penalize by subtracting aid to farms that fail to comply with labor legislation, will begin to function in 2024, one year before the limit established by Brussels.

“A long and intense work process of more than three years is culminating in close collaboration with the autonomous communities and in constant dialogue with professional organizations”, they value with satisfaction in Agriculture, which must send the Spanish strategic plan to Brussels before ending the year to meet the deadline set by the European Commission. At COAG they agree that carrying out the new CAP has taken three years with “a lot of work in many aspects”. The organization’s technical coordinator recalls that the total amount supposes “a frozen budget” in a context of high inflation. In recent weeks, the unions in the countryside have staged demonstrations to demand responses to the increase in production costs, pressured by the rise in prices of energy, fuels and fertilizers.