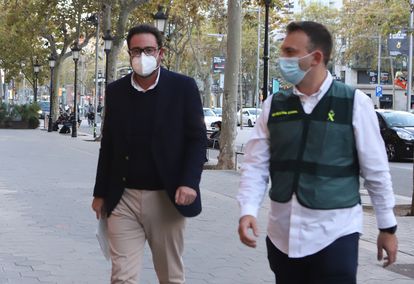 David Madí, during his arrest by the Civil Guard, Cristóbal Castro

The European Prosecutor’s Office will decide if there is a crime in a telephone conversation starring David Madí, businessman and former position of Convergència Democràtica de Catalunya, about European funds for recovery after the pandemic. The Barcelona Court has ratified the decision of the judge investigating the Voloh case ―A macrocause of corruption linked to process– to send the call to this newly created body when it is possible to see evidence of a crime.

Madí, close to former president Artur Mas and considered one of the strategists of the independence referendum of October 1, spoke by phone on October 20, 2020 with a company consultant about the distribution of the 140,000 million euros that Spain will receive from the European Union (EU) as funds for recovery. In that talk, Madí says that he had a meeting with Iván Redondo, then President Pedro Sánchez’s chief of staff.

“You have to establish a channel to enter. I saw myself with Foment, I am part of Foment [Fomento del Trabajo, la patronal catalana de la cual es asesor] and we had a small committee meeting with Iván Redondo. This will be a black snack … They are 140,000 million, “he said in the call with the consultant. The conversation took place a few days before Madí – who has also held positions in large companies such as Endesa, Telefónica, Applus or Deloitte – and a score of other people, including several leaders of the process, were arrested for crimes of corruption by order of the head of the court of instruction number 1 of Barcelona, ​​Joaquín Aguirre.

After receiving a report from the Civil Guard that analyzed the conversation, Aguirre concluded that there were indications of a crime against the interests of the European treasury for irregular subsidies. And, last August, it ordered that a copy of the conversation be sent to the European Public Prosecutor’s Office, a newly created independent body, which began last summer. Based in Luxembourg, its mission is to investigate crimes that harm the financial interests of the EU.

The judge of Voloh case ran into two obstacles. The first was predictable: Madí’s defense objected. It alleged that the order did not meet the legal requirements because the conversation “does not infer any agreement for the distribution of European funds, but rather it is about offering an advisory service by Mr. David Madí to his clients, to present projects and request aid. Europeans ”. The defense admits that Madí attended the meeting with Redondo, but recalls that some 60 members of the Catalan employer’s association Fomento del Trabajo also participated in the meeting. Any investigation, Madí concludes, would be “prospective.”

The second obstacle was not so predictable: the Anticorruption Prosecutor’s Office joined the appeal because it believes that Madí spoke only of “business expectations.” And he asked that the case not be sent to the European Public Prosecutor’s Office but rather be archived for lack of evidence of a crime.

The Barcelona Court has now agreed with the judge and the associations that prosecute in the Voloh case. The magistrates believe that “there has been no legal infringement” and that the order exposes the “well-founded suspicions” that Madí may have committed a crime of fraud of European subsidies. The judges admit that “nothing illegal is inferred from the conversation”, but they assure that “it could not be ruled out” that the objective of the businessman was “to divert the public funds obtained and invest them illegally.”

The magistrates recall that it is the European Public Prosecutor’s Office that will now decide whether to initiate an investigation or to archive it. A spokeswoman for the institution assures that, in all probability, it is not the first complaint from the Spanish justice system, although perhaps it is one of the first that transcends public opinion. The spokeswoman recalls that, since it was put into operation on June 1, 2012, the European Public Prosecutor’s Office has received 2,500 complaints and has opened 500 investigation procedures.