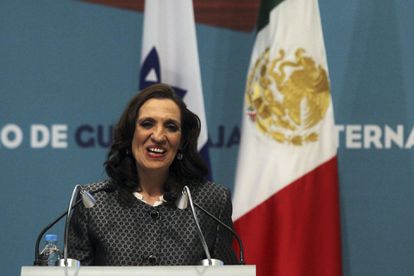 The thesis of the Argentine writer Ricardo Piglia has been heard almost to exhaustion that a story actually tells two. It does not mean that he is not right: according to Piglia, the art of this genre, in its classical form, consists in having the ability to encrypt a second story within the interstices of the first, the one visible in the text. The story will be successful as long as the second story rises to the surface at the end to surprise the reader. What happens then when the second story is expressed just by looking up at the end of the reading, when it is reality that unmasks what has just been read? Some of this occurs in those published by Ana García Bergua under the title Read on airplanes (It was, 2021). Each of the 18 stories that make up this book maintains a plot that is rather two, or even more, inside and outside the text.

García Bergua (Mexico, 1960), winner of the Sor Juana Inés de la Cruz Prize for the novel The San José pump, at FIL in Guadalajara 2013, achieves with Read on airplanes remind readers of the many ways to read a story or, rather, to understand it. The theme of displacement contained in these stories is just the pretext that leads the reader to other types of trips where what matters the least is the destination. From the first lines, the texts incite those who pass their eyes on the page to communicate with the characters, to ask them not to be so naive, to beg them not to put that stranger in their car or to stop on a path that do not know. The enigma is the constant in the journeys that are expressed not only in the airplanes: the stories happen in cars, trains, ferries, trucks, long walks; even inside an elevator. Why a plane and not a train or any public transport? “It is a metaphor for reading. In an airplane one is suspended in the air, in wonder or sadness or in what that trip represents, but you cannot go anywhere, you cannot flee. And at the same time reading is like a salvation ”, responds in an interview for EL PAÍS Ana García Bergua.

Getting from one point to another is said to be easy. One has only to think of Zeno’s paradox to realize the real problem: before getting anywhere, there is a middle ground; between the middle and the beginning there is another, followed by another between those two, followed by one more between them and so on ad infinitum. In such a way that the traveler does not arrive or arrives being another to what he wanted. This is what happens, for example, in the story ‘Hotel Mármara’. The desire of two lovers is subject to the pattern of their own thoughts, which stops them and forces them to change without even being close to destiny. Or what is worse: the objective is what moves. This occurs in the story ‘Gift of tongues’ – perhaps the shortest in the collection – in which the inhabitants of a city called Tesla, under the pretext of pleasing tourists in their respective languages, begin to study languages ​​from all over the world. world to an obsessive and minute degree. Residents compete in an unhealthy way and begin to harass travelers for their approval. There comes a time when tourism, the reason that originated everything, is left aside because the locals speak the languages ​​better than the natives of other countries. Such is the degree that now the citizens of Tesla go out into the world with the intention of supplanting them.

This story has great allusions to the present, to the need to run without knowing where. To stand out without knowing why. “Today you want to know everything and do everything. There is a thirst for fulfillment and at the same time so many difficulties to achieve the most everyday, the most immediate ”, says García Bergua, who, for years, has given writing workshops and points out this nonsense in the literary field very well. “Many write to register projects, not out of an inner need; it is written thinking about what the FONCA will like; with what theme could one win an award and I think that is linked to the crisis and how difficult life is for young people now ”. A lack of scriptural ethics is exposed among the new generations, such as the one that the poet Yaxkin Melchy once referred to regarding the trivialization of the image of the writer, of the exacerbated cult of personality. “What makes me sad is that individual variety is sacrificed to express different things. The themes become uniform and everyone writes about violence; women write about women. It seems that everything is part of social struggles and the meaning of literature and art in general is lost. Freedom is being lost by going into fashions or by being commercial. Regarding the cult of personality, I think it is only dangerous in politics ”, comments the author of The Hindu storm and other stories, which gave him the Fine Arts Award for Narrative of the State of Colima in 2015.

In Mexico, all roads go to Comala. A narrative entitled ‘The wind of the ghosts’, another of the most outstanding texts of this work, inevitably takes the reader there. Although the town in this story is called Heredia. Here its inhabitants live with their ghosts; for them, something else everyday. It is also inevitable to think about the possibility that the living characters in this story are actually the dead. “They are not transcendental ghosts like Rulfo’s, but rather they are annoying ghosts, doing what they did before, just like when they were alive. And then people don’t even know what feelings to have. And it is that one tends to think that if one dies and is a ghost, then he is going to take revenge for his wrongs, he is going to fulfill passions. We are always on the level of romance. But I think that ghosts, perhaps out of inertia, want to continue doing what they always did. And maybe that’s where the idea of ​​these ghosts that are the antithesis of Rulfo came from. Many of us live among ghosts too ”, affirms the writer.

Daughter of the Spanish exile Emilio García Riera, the author does not touch in this travel book – not diary – the issue of migration. Precisely for not getting on that editorial train that is beginning to march about this crisis. “Why didn’t I write a story about migrants?” He asks. “Perhaps because I am the daughter of immigrants who came from a war and I think they are stories that somehow one already knows. I’m not saying that everything that happens is not serious, but I prefer to bet on other issues: on the minutiae of everyday life. In this time of so much political correctness, one feels the need to justify why he writes what he writes, ”he clarifies. In that sense, Ana García Bergua is a rara reviews in literature she finds no other way to write – she would say – other than by following her own instincts and the creative will that she has within. “Sometimes with my books I feel like ‘The Lone Ranger’, because while everyone is talking about this and that, this crazy person appears talking about transport. Oh well…”