The Hearing sets 10,000 euros in compensation for the man acquitted for the death of six people in a boat 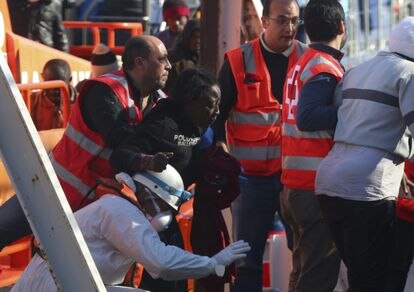 Several of the immigrants rescued from the boat located on December 5, 2014 in the waters of the Alboran Sea, upon arrival at the port of Almería.Carlos Barba (EFE)

The National Court has agreed that the Ministry of Justice will compensate the Cameroonian Alain NB with 10,000 euros, whom a popular jury found not guilty of the death of six people who were traveling on board the so-called “death kayak”, in December of 2014. The court partially upholds the contentious-administrative appeal of the defense, which claimed 300,000 euros, and concludes that it should be compensated only for the “623 days that he suffered preventive detention” for some facts of which he was later acquitted.

The sentence considers that the “really accredited damage” would be the “moral one, due to the consequent social loss of prestige” and the “rupture” with the environment that the prison “entails”; and it qualifies as “inadmissible” that the 39 days that he was admitted to the CIE in Algeciras (Cádiz), where he was detained, are added to the claim for patrimonial liability.

According to the Prosecutor’s Office and the Police, about 50 people were traveling in the boat piloted by Alain NB and 27 of them lost their lives. At the trial, the public prosecutor requested 90 years of imprisonment for the pilot, accused of having thrown overboard a Christian pastor from Nigeria and five compatriots in the middle of a storm. According to the accusation, he did it together with another of the pilots, who died during the investigation of the criminal case.

The court points out that, as Alain NB alleges, there are no “undue delays” that influenced the duration of the provisional detention and that it cannot be maintained that “he could not work” because of this process, as his defense pointed out, because “ evidently he had not entered Spain legally ”and lacked a“ residence permit ”. In addition, the National Court indicates that the damages wielded by the “media repercussion” are outside the cases provided by law to receive compensation of these characteristics.

The popular jury considered that the “bad” weather conditions influenced the tragedy and highlighted that the bodies of the victims were never found, that they “fell into the sea” from the boat, that “it filled with water” and “lost the engine” . The verdict reflected that it had not been proven that Alain NB blamed the shepherd for the state of the sea, nor that he used wooden slats from the bottom of the boat to hit the preacher and five other people with them to later throw them into the sea, in the absence of photographs or police statements about the state in which the boat was found. They also rejected for lack of evidence the existence of “tribal spiritual protection amulets and belts” that some of the occupants of the boat were supposedly wearing and that this, together with the belief that prayers made the storm worse, had motivated the murderous action.

The investigation by the Police and the Prosecutor’s Office was based on the testimony of four occupants of the boat, declared protected witnesses. The survivors of the journey recounted being rescued by Maritime Rescue troops who had left Nador (Morocco).