Pierre Pachet, the self-fiction without exhibitionism that preceded Emmanuel Carrère

“It is possible that certain facts, although they are not completely excluded from this story, do not appear in the place that the chronological order would require. Furthermore, it must be remembered that I have not undertaken the composition of a literary work about a fictional character, but rather a work of self-analysis or autoscopy carried out on a living subject or, rather, a dying subject, which amounts to the same thing ”. This reflection of Pierre Pachet (Paris, 1937-2016), this notice to the reader of Autobiography of my father (Peripheral) collects the essence of the literary purpose of the great renovator of autofiction. It is a book turned into a fragmentation bomb with a delayed effect, a work published in 1987 whose trace we can later follow in the eyes of Pierre Michon, Emmanuel Carrère or Edouard Louis.

By 1984, Annie Ernaux had busted the genre with The place, a book about his father. He was 44 years old and the effect on his work and the environment was such that he would never write fiction again. What was left to do? Pachet dispenses with everything that had been done until then in a field so traveled by men (JR Ackerley, Philip Roth, Martin Amis, or Karl Ove Knausgard are some notable examples before and after) and creates an autobiographical profile but not his, or not only, but of his father, a set of literary and real identities from which he escapes unscathed. It is not clear to whom the narrating voice corresponds. Is it that of Simcha Apashevsky, doctor, Jew, intellectual, survivor, husband, father? Or is it that of the son who tells his story from the silences, the intellectual vocation, the pessimism and the frustration of the parent? There is no distance and it doesn’t matter. Towards the end of the book, as towards the end of a vital journey, the frustration over the father’s illness, his decline, the impossibility of going back and making up for lost time merges both gazes with that of the reader, who, questioned In the most intimate way, he identifies with the story of life, whoever it is who speaks. And the father, by magic, preserves his voice beyond his existence thanks to the literary interaction of the son. 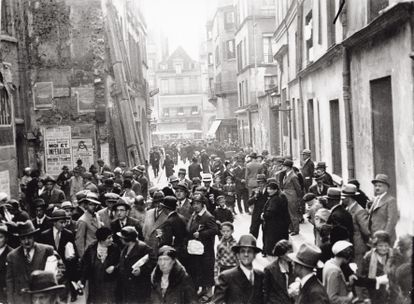 A street in the Marais, a Jewish quarter in Paris, around 1930, Imagine (Getty Images)

Autobiography of my father is for The world one of the 50 best novels of the second half of the 20th century. Seen in perspective, it is much more than a novel. Her portrait of pain and loss, her attempt to make sense of what may not have it, connects her directly with In front of my mother (Gallimard) Pachet’s book dedicated to his mother and published 20 years later. As in the play about his father, the French author here gives us a lesson in generosity and literature. The story places us at the moment when Pachet realizes that his mother suffers from senile dementia, his life is slowly dying out and the past invades the present through an interior monologue that grows as a great form of language. Pachet, however, seeks to enter that world. The literary word of Autobiography of my father here it becomes the tool to access a collapsing existence. “For two years I have been witnessing the process of progressive decomposition of reality for my mother,” he assures after the halfway point of the book, as if looking back he needed to justify himself. “However,” he continues, “I cannot limit the subject of this writing to the chronicle of a loss, a loss that takes place before my eyes or that I rather see every time I visit.”

Pachet’s prose has that simple style that is so difficult to achieve and that Laura Salas captures with precision in her translation into Spanish for Periférica. Borders with biography, self-fiction and memoir of American tradition, these two sad and evocative books – as it was Adieu, focused on the illness and death of his wife – they avoid any exhibitionism, they count more the further they move away from the egomaniacal excesses of self-fiction, errors in which he does not fall even when he confesses, for example, that he feels “humiliated” by the progressive deterioration of his mother or that he does not understand the vital drift of his father. The flow of sensations that it carries In front of my mother they never exceed certain limits, but they reach their destination. “I was a beautiful young woman and now I don’t know who I am,” the mother lets out her son, one of the many bombs that falls when he speaks, and he shares it and does not overcome it with it, but exorcises it. The French author has a pulse on how the inner monster advances in the patient, how it destroys the coherent language, the connections, how it leaves, cruel, that some real memories jump over the wall of dementia and bring, for example, the death of a daughter occurred years ago to the present. 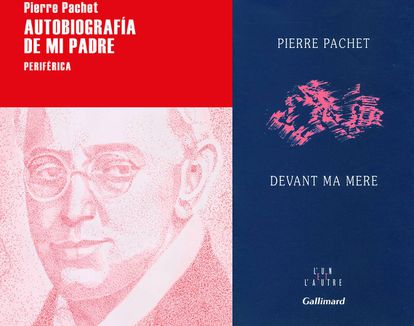 Faced with the decomposing world of his mother, Pachet searches for the woman he was even before he met his father, that Lithuanian student who faces the world and arrives in Paris without speaking French, that woman who leaves a promising career to be a good wife and mother, comply with what was then regulated; that Jewish woman who survives the Nazi barbarism that massacres a large part of her family. But there comes a point where she cannot investigate further and the only witness to that no longer has memories. Or she has them but they are spoiled, they form a story that narrates another world that exists only for her. It is a terrible coincidence that father and mother lost their sight before they died. It is beautiful what your son has done with his decline and death and with the vindication of what they were. His daughter Yaël Pachet published in 2019 My father’s people (Fayard). The tradition continues.