Convicted of involuntary manslaughter, the police who killed an unarmed African-American “by mistake” 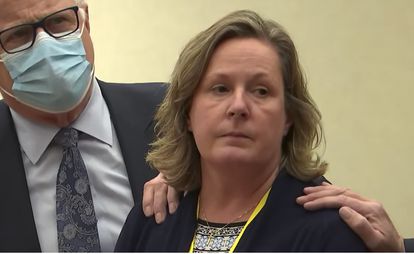 The former Brooklyn Center police officer with her attorneys during the verdict.

Kim Potter, the Minnesota police who mistakenly drew his service weapon instead of his stun gun in early April during a police check in which he shot and killed Daunte Wright, has been found guilty on Thursday. The jury had been discussing the future of the former agent since Monday, who after the accident resigned from the Brooklyn Center, Minnesota police department, after 26 years of service. The members of the jury have announced this afternoon the verdict in which they have found her guilty of murder in the first and second degree for the death of Wright, who was 20 years old when he died.

The maximum penalty for manslaughter in the first degree based on the reckless use or handling of a firearm is 15 years in prison.However, since Potter, 49, has no criminal record, he risks between 6 and 8, 5 years in prison. Prosecutors announced that they will seek a longer sentence. When the ex-police officer heard the verdict, she was undaunted and moments later made the sign of the cross. The sentence will be known on February 18 and until then she will remain detained without the possibility of bail. “It’s the Christmas season,” argued Potter’s defense. “She is a devout Catholic, and there is no point in jailing her right now.” Judge Regina Chu dismissed the allegation and responded that she could not treat the case differently from any other.

The trial lasted two weeks and ended with Potter’s testimony confessing through tears that she was “very sorry” for what happened. Neither party questioned that the former police officer mistakenly drew her firearm, thinking it was her stun gun. The trial centered on whether as a service professional for so many years she should have recognized that she had a heavier metal pistol in her hand, or if the situation had required her to draw a weapon. “He pulled out a deadly weapon, pointed it at Daunte Wright’s chest and fired,” Assistant Attorney General Erin Eldridge said during closing arguments Monday. “This was no small feat,” he continued, “it was a colossal blunder, a blunder of epic proportions.” Potter was training two police officers on April 11 when Wright’s car was stopped for allegedly committing a minor traffic violation. In the interaction with the young African American, they discovered that he had a pending court order for carrying a weapon without permits. Agents tried to arrest him, but Wright, unarmed, resisted and returned to his vehicle. Potter pointed a pistol at him and yelled “taser” three times, referring to the stun gun. However, the agent fired with her firearm. “Shit, I just shot him,” Potter is heard saying in video recorded with the police camera attached to his uniform. “I got the wrong damn gun,” he adds.

The shooting occurred at a time of great tension between the African-American community and police in the State of Minnesota, as former Minneapolis City Agent Derek Chauvin was on trial for the murder of African-American George Floyd. On April 20, he was sentenced to 22 and a half years in prison.