Christmas without light for Christians in Syria

In front of the crib of the Maronite Cathedral of Saint Elias of Aleppo, Hana (1) resonates with gravity the words of Soubhan Al Kalima, “glory to the word of God who was born”. Damaged during the fighting in the old town during the war (read the landmarks), the building, which had celebrated its first Christmas mass in the rubble in 2016, found a roof in July 2020.

“Many say they would prefer the war to return, that it was less difficult”

But if its restoration has blown a wind of hope among the Maronites and among the ten other Christian communities in the country, the heart is not there on Christmas Eve. “In 2017-2018, we still had hope. Today, we have a little left, but it is difficult to imagine this Christmas, explains the young Alépine. Among us, people are suffering in the cold, without electricity. The economic situation makes things even worse. Many say they would prefer the war to return, that it was less difficult then, ”she adds.

One hour of electricity per day

In the streets of the former Syrian economic capital, the glaring light of auxiliary LEDs, powered by generators according to means and fuel oil supply, contrasts with the heavy darkness. With one hour of electricity a day supplied by the government, a terrible economic crisis – the average salary is $ 50 a month – and trauma still alive, life in post-war Syria seems twilight. 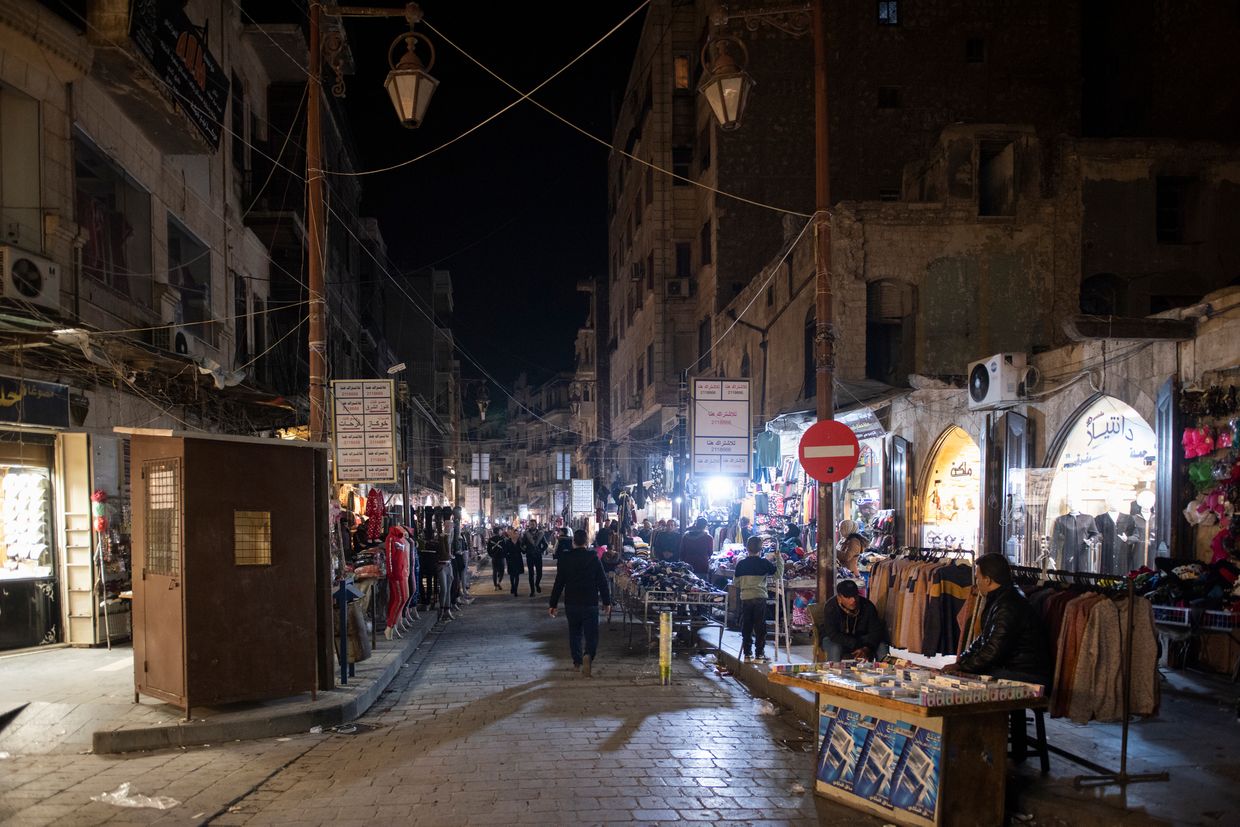 Hana works at the Hope Center in Aleppo, which helps families affected by the past decade, through micro-projects and zero-interest loans. “The idea of ​​this initiative is also to deepen the meaning of their presence as Christians here”, explains Vincent Gelot, director of l’Oeuvre d’Orient in Lebanon and Syria. Founded in 2018, this structure is the culmination of a reflection led by two Christians from Aleppo, Safir Salim and Freddy Youssef, with l’Oeuvre d’Orient. The duo first launched in 2013 a “Study Zone” to meet the needs of students during the war.

→ READ. Who are the Christians of the Syrian rite?

The project, on the strength of its success, has since spread across the country: in Homs alone, there are now three. “Here at least, it is hot, there is light and the Internet, it is much easier to work than with us”, explains Lath, Christian student in computer science, alongside her friend Salma, a Muslim. “We come almost every day to revise, from morning to night,” adds this dental student. Their life plans, their Western-style modernity and their impeccable English contrast with the almost medieval situation they endure on a daily basis. Like most young Syrians, both only think about leaving, with a very specific plan after their master’s degree: to join their siblings in Germany.

This is the whole challenge for Safir Salim, who spares no effort to support this youth. “100% of young people say they want to leave, or“ travel ”as we say here. They only reason in terms of loss and abandonment. And Facebook isn’t helping them by letting them believe it’s always better elsewhere. It’s their choice, but first they have to find their way, ”he explains. “You can’t find much hope here. On the ground of God, on the other hand, there are some ”, adds this father, whose daughter was literally born between the bombs at the Aleppo hospital in 2012.

The “phobia” of starting a family

The exodus of Christians is an old reality in Syria, which dates back to the 19th century, “but after the last ten years, and at this rate, in five years, if nothing changes, they will all be gone”, warns Safir . Today, the country has only 140,000 families, according to Hope, against 560,000 in 2010. And, an aggravating factor, many young Christians show a “phobia” at the idea of ​​starting a family, given the few prospects offered to them. 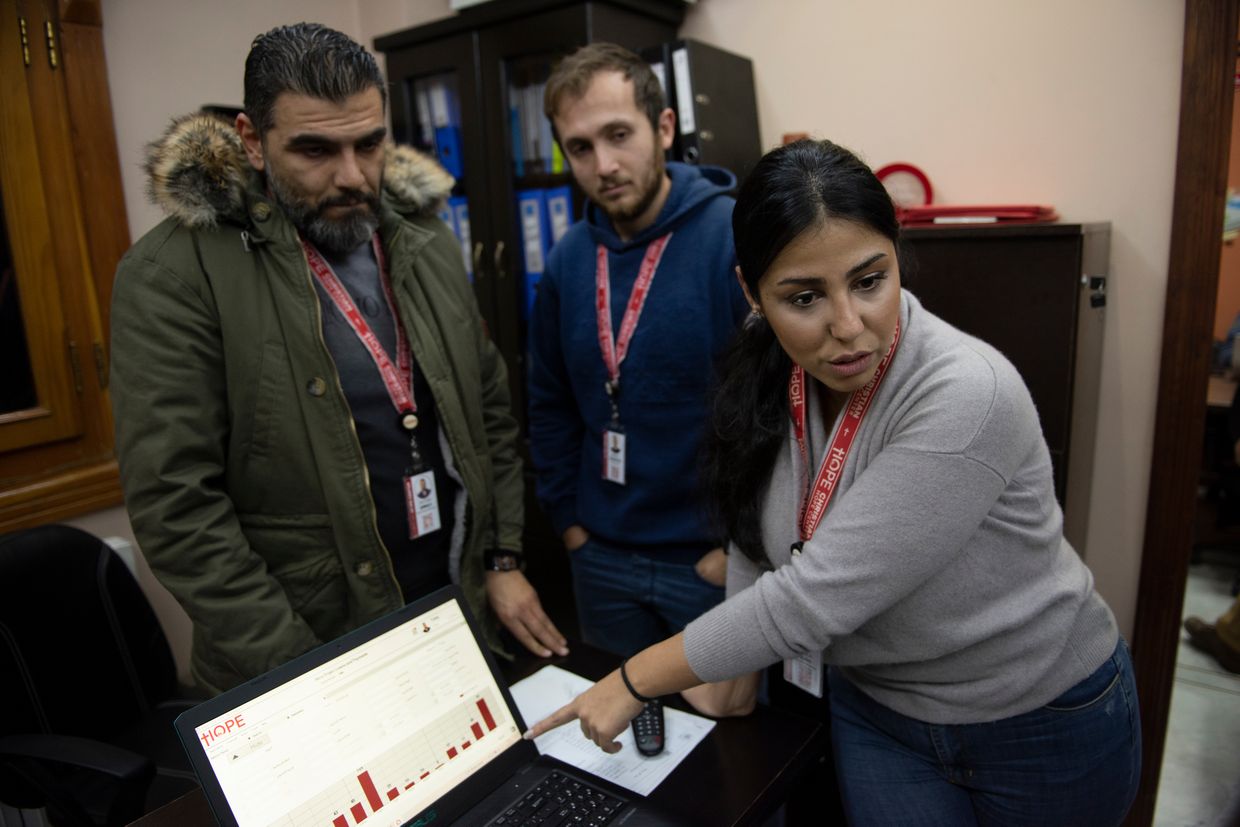 Since 2018, the Hope Center in Aleppo has been helping families in need, with micro-projects and zero-interest loans. Here in December 2021. / Hasan Belal

At the Disc (Development Impact and Support Center) in Homs, another structure launched by Safir Salim to help young graduates to be more attractive on the job market, Lamia and Nadine (1), both English teachers, are proud to be part of this project for which l’Oeuvre d’Orient has invested € 500,000 over three years, and which has already supported around 150 people. “We are like a window for them,” explains Nadine, “and we can show them another side of the post-war period. “A post-war period which, for many, is now an” economic war “.

But, there again, the thirst for elsewhere is never far away. Thus a very close friend of Lamia has flown in recent days for Belarus, the new El Dorado for those who have no legal way to leave. “Thank God he is alive and in a tent in the forest somewhere in Poland. He does not know where he is going, but wants to succeed, and said to himself: “Everything except Syria!”. », Says the 30-something.

→ LARGE FORMAT. The 20 days of “survival” of Ahmad, a Syrian migrant lost between Belarus and Poland

Among the young Christians in training at the Disc, girls and boys confide bluntly what they would like for Christmas: “Electricity”, answers one, “the smile of my sick mother who has no medicine for her. to take care of oneself ”, continues another. “To be independent and to start a beautiful family”, confides a third. They all still live with their parents, “you can’t choose,” says Nadine. For men, one of the driving forces behind exile is to escape military service, which can last ten years in Syria and prove fatal. Only single sons are exempt as well as families who enjoy high-ranking relationships or can afford an exemption (up to $ 8,000). 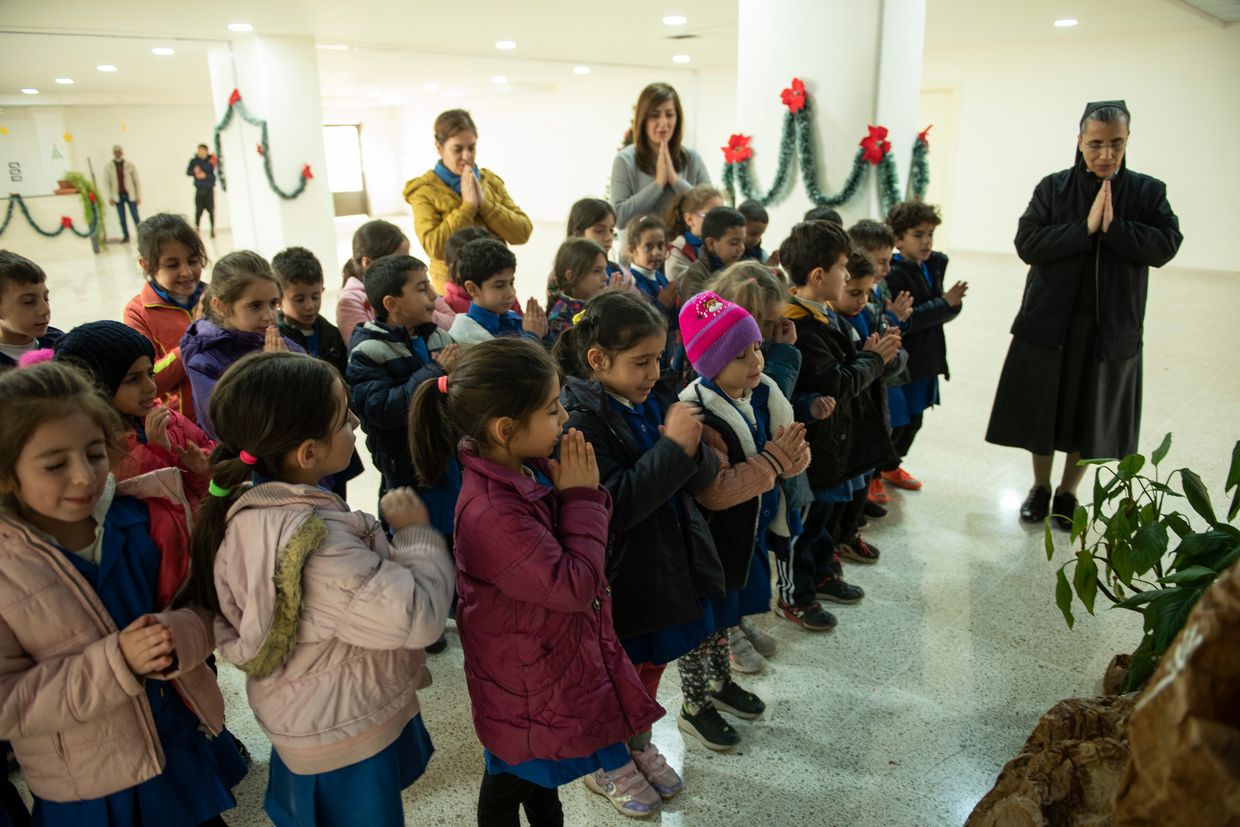 Children pray in a school in Damascus. / Hasan Belal

Charbel, he did not cut it and was wounded during his conscription in Idlib (north-east). Marked physically, he hopes, at 33, to turn this painful page at the end of his training. “I would like to get a microcredit to start farming and plant vines,” he explains. “If they find work in Syria, they will stay in Syria,” says Nadine, whose family lives in the United States. Choosing to stay is for some a deep faith and even a mission. “When you come back, we’ll be there to make a difference,” says Lamia.

In Homs, Father Mathieu (1) also tried to act on his own level, but observed the inevitable exodus of Christians day by day. “I celebrate starting masses every month, especially for young people,” laments this religious who has been living for three years in this city where the Dutch priest and Jesuit Frans Van Der Lugt was shot dead in 2014 by an armed man. “Families sell their houses, take a rental, and this capital finances the departure of their children,” explains Father Mathieu.

He takes care of the pastoral care on a daily basis and takes young people to the countryside for camps as soon as he can. “Since there is nothing else for them to do here, apart from the activity of the churches, that gives us a figure,” he smiles. Before drawing up a gloomy picture of the situation: “We are bordering on absolute horror, we are at the bottom of the hole. I don’t know how people haven’t starved to death yet, how they survive economically because their work doesn’t allow them to live. About fifty children I take care of are struggling to eat, the diet has nothing to do with what it was three years ago. “ 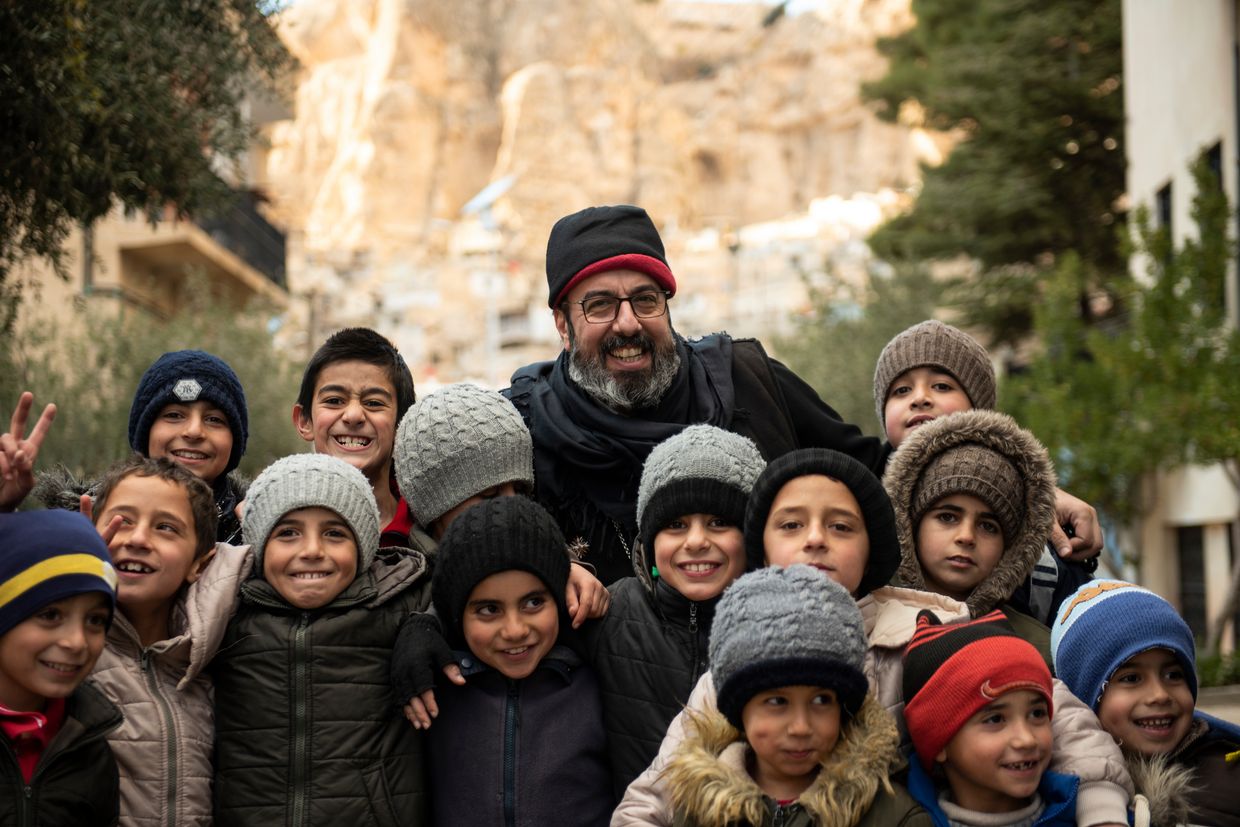 A priest and teenagers from his pastoral care, in front of a church, in Maaloula, near Damascus. / Hasan Belal

Psychological distress is growing among parishioners, children and adults alike. “There are still many missing, three or four children I take care of have not heard from their father since the war. It’s a way of not saying they’re dead. »Is there an inventory of responsibilities during the war? “Nobody really puts the puzzle together and that also creates psychological insecurity, anxiety”, explains the religious.

“We have the impression of being forgotten, that nobody cares”

So, in order to comfort his community, Father Mathieu prepared packages for the holidays, with liquor, chocolate, what to make Christmas cookies and a tale written in his hand. “These are 750 families to whom we are going to bring a little Christmas,” he hopes. But we have the impression of being forgotten, that nobody cares. “

The weight of sanctions

“Syria is forgotten,” abounds in Damascus Cardinal Mario Zenari, apostolic nuncio for thirteen years in the country. She is emptying herself of her young. Emigration is a bomb, like poverty. The country will be strangled if nothing changes ”, estimates the Italian diplomat for whom the international sanctions, especially American,“ weigh on the population, not on the government ”. But many Christians also complain about the absence of religious leaders on the ground to help departing youth. 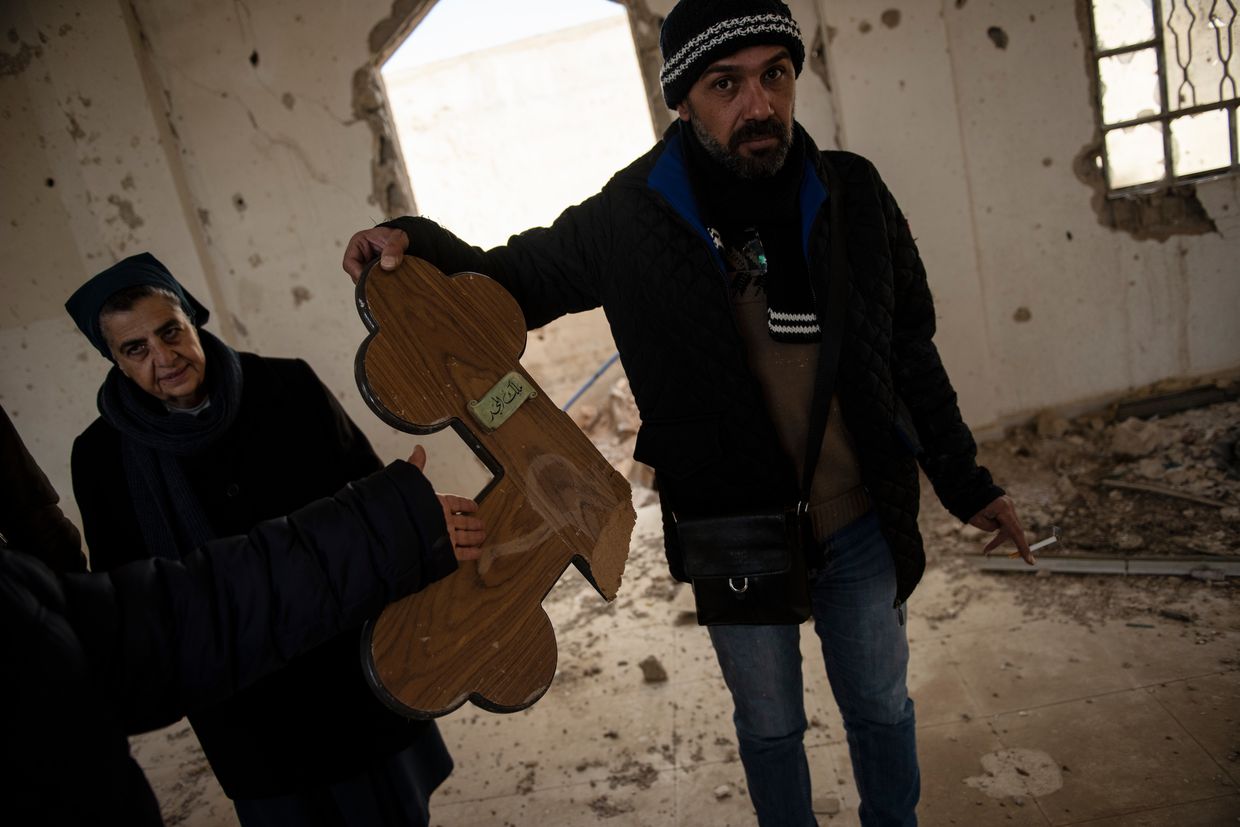 In the rubble of a church in Adra, near Damascus, in December 2021. / Hasan Belal

Some are calling for a synod for the Middle East in order to resuscitate the sense of community and send a strong message to Christians who feel neglected. In mid-March, all churches in Syria and their partner humanitarian organizations will meet at the Melkite Patriarchate, at the initiative of the nunciature, to try to coordinate aid further. “Christians have been present here for two thousand years, in the fields of education and health,” affirms the nuncio. They are an open window to the world for Syrian society. So when a Christian asks his bishop for a baptismal certificate to leave, it’s terrible, a window closes. “

► Mars 2011. Under the impetus of the “Arab Spring”, demonstrations for democracy and against the regime of Bashar Al Assad are organized across the country and brutally repressed. The movement becomes an armed rebellion.

► December 22, 2016. Government troops prevail in Aleppo, the country’s second city, until then partially controlled by the rebels.

► May 21, 2017. Fall of the city of Homs, considered the bastion of the uprising, to the hands of the Baathist regime.

► May 26, 2021. Contested re-election of Bashar Al Assad, president of the Syrian Arab Republic for twenty-one years.