60% of Europeans consider the number of immigrants to be excessive 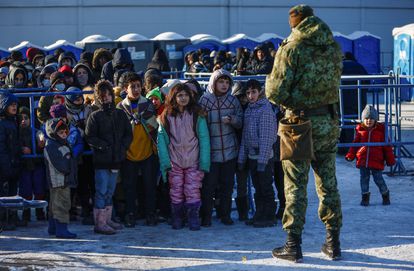 Migrant children were queuing for food on Wednesday in Bruzgi, Belarus, very close to the border with Poland.MAXIM SHEMETOV (REUTERS)

Most Europeans believe that both their country and the European Union have received too many immigrants in the last decade. And almost half are in favor of building border walls or consider that, in general, the foreign population has no intention of integrating into society. These are some conclusions that emerge from a survey carried out by YouGov for EL PAÍS and seven other newspapers that are members of the LENA alliance.

The survey, in which more than 12,000 people in a dozen countries (Germany, France, the United Kingdom, Italy, Spain, Poland, Belgium, Sweden, Hungary and Switzerland) took part, shows that six out of 10 Europeans think that Since 2012, more immigrants have arrived in their country than they should have allowed (35% believe that this has been a “very excessive” number). A very similar figure (61%) estimates that too many foreigners came to the EU as a whole.

The results, however, differ markedly between the different countries. The population of Italy (77%), Spain (75%), Sweden (73%) and Germany (67%) is the one that shows the greatest rejection of the number of people arriving in their territory. And in the four countries it is observed that citizens consider that the levels of immigration admitted by their State are more worrying than those of the entire EU.

In the case of Spain, the migratory balance of foreigners (the balance between those who arrive and leave the country on a regular basis) in the last ten years has been positive: 950,012 immigrants, according to data from the National Institute of Statistics. In addition, in recent months irregular arrivals by sea to Spanish territory have rebounded, with 2021 as the year with the most deaths on the Atlantic route – which leads to the Canary Islands – since there are records. In Germany, for its part, the number of foreigners residing regularly in the country has increased in the last ten years by more than four million, according to the Federal Statistical Office.

YouGov researcher Patrick English explains that the 2015 migration crisis – which brought nearly a million asylum seekers to Germany – cannot be said to be the main reason for the rejection shown in the survey. “The perception that immigration on the continent is excessive is not new. And migration issues appear and disappear from the political agenda of countries based on various causes. There is no clear and unique motive behind this general rejection ”.

Poland and Hungary, whose governments have been reluctant to agree on refugee quotas with the rest of the EU countries, are the ones that show greater acceptance with the immigration levels of the last decade. 39% of Poles and 34% of Hungarians consider that too many arrived in their country, compared to almost 40% in both cases who consider that the figure was adequate. On the contrary, two-thirds of the Polish and three-quarters of the Hungarian citizens believe that the Union as a whole should not have allowed the entry of such a large foreign population.

Another of the countries with a lower rejection of the level of immigration received in the last decade is the United Kingdom. Half of the British believe that there were too many foreigners who came to their territory, but only two in five think that the number that reached the whole of the EU was also excessive.

On the other hand, 43% of those surveyed support the erection of walls and fences at the external borders of the EU, compared to 46% who are against. It is in Hungary, which borders Ukraine and Serbia, where there is a broader support, with more than 70% in favor and only 20% against. In Poland, Germany and the United Kingdom, the approval of the construction of walls is also majority, while in the rest of the countries there are more who reject it than those who support it. In Spain and Italy, despite the fact that three-quarters of the population believes the number of immigrants received in the last decade is excessive, just over a third is in favor of sealing the borders with non-EU countries with cement or concrete.

Another idea that emerges from the survey is that the majority of Europeans believe that the foreign population, in general, has no intention of integrating into European society. This is what they consider 46%, compared to the third who believe that immigrants do intend to integrate into the host country.

The British population is the most divided in this regard, with the same percentage of respondents (39%) who believe that foreigners do want to integrate compared to those who do not. Of the rest, Spain is the country with the least difference between those who believe that the first problem of integration of the foreign population is their lack of will (41%) and those who value that the majority of immigrants are willing to join to the social structure of the host country (39%). In Italy, Germany and Sweden, at least half of those consulted believe that the foreign population should make a greater effort to integrate.

Respondents are also very divided on whether the arrival of foreign population poses a threat to national and European identity. 45% believe that it does pose a risk, compared to 48% who believe that it does not. Spain is the country in which the perception of this supposed threat is lower: only 35% second it and 59% reject it. However, in France, Germany, Belgium and Hungary more citizens perceive an identity risk than those who do not.

Another conclusion drawn from the study is that Spanish citizens perceive above the European average that foreigners limit their possibilities in the labor market, or that they increase crime in the country. English argues that the high level of unemployment in Spain could be one of the reasons for this concern about job opportunities, but believes that there are some cultural aspects that have a greater influence.

In the case of France, the European country that has suffered the most from terrorism in the last decade, two out of five respondents consider that the arrival of immigrants increases the risk of terrorist attacks. Belgians, however, are the ones who most perceive that immigration puts religious tolerance at risk in the country. And the British, for their part, are by far the Europeans who most believe that the arrival of foreign population implies a deterioration of national public services.

Finally, Poles consider more than the European average that immigration puts their cultural values ​​at risk, but are less concerned that it might affect their democratic values.