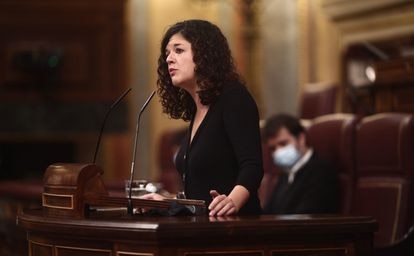 Sofía Castañón, deputy spokesperson for Podemos in the Congress of Deputies, has won this Wednesday in the primary process held in Asturias. The parliamentarian, who also holds the secretariat of Culture in the direction of Ione Belarra, becomes the second regional coordinator since the birth of the formation in the Principality, a position that until now occupied Daniel Ripa, the last baron openly critical of the Executive national. Although Castañón takes over the position, the Autonomous Citizen Council, the governing body in the community, will have a majority similar to the outgoing coordinator (11 to 9). The also regional deputy had raised the tone in the last week of the campaign, denouncing the “intervention” of the Podemos Asturies accounts by the party’s state leadership and this Wednesday he warned of the “absence of security mechanisms” in the count.

The deputy spokesperson, who has beaten Ripa by a narrow margin of 100 votes (1,674 vs. 1,574), defended in his project “to deepen in feminism, Asturianism and environmentalism”, in addition to “reaching out” to political, union and social forces to “weave” a broad front, in line with the project of Vice President Yolanda Díaz .

After a tense campaign, in which Ripa accused the leadership of Ione Belarra of having tried to “separate” him to “pave the way” for Castañón, the controversy increased just two days before the voting process began, when The regional coordinator announced that during the previous weekend, transfers worth 200,000 euros had been made from the account managed by the training in Asturias to another controlled by the State Directorate of Finance. Part of those funds, according to Ripa himself, were destined to “donations to social projects.”

The intervention had occurred as a result of an internal complaint made by members of the Autonomous Citizen Council after the call, at the end of November and in the middle of the primary process, of a new edition of Project Asturies, the aid program for entities that have social plans that the party has carried out for years with money from donations from training positions in the community. The proposed resolution that the regional management forwarded to the Citizen Council for a vote contemplated, within the 50,000 euros budgeted, two items of more than 12,500 euros destined for associations that the complainants linked to the Ripa environment (Moza d’Asturies Assembly and La Folixaria ). The Regulatory Compliance Unit, an autonomous body of the Podemos management that oversees the legality of internal decisions, then concluded that the events could represent an “infraction of the ethical code”, for which it requested the state management of Finance to freeze the accounts with which Podemos Asturies operated.

The Electoral Committee of the primaries, however, agreed days later the existence of an “unjustified interference by certain state bodies” of Podemos in the process, which causes a “serious prejudice” to Ripa and “benefits the other candidate,” according to the resolution of the body, which had three votes in favor and two inhibitions.

This same Wednesday, before the results were known, the regional deputy requested “transparency and clarifications” in the audit process of the primaries and denounced “the absence of security mechanisms” with which, according to what he claimed, there were in previous calls . The regional coordinator affirmed after Tuesday’s meeting of the anti-fraud committee, prior to proceeding to the count, that the procedure was not the same and that “guarantees” were lacking.

“This year they have told us that we cannot verify anything, that the screening of the votes that are valid and those that are not was done by a computer scientist dependent on the state administration. We do not have the census, we do not have information on whether or not there are votes removed and why, we do not have a reasonable explanation for this. The anti-fraud Commission received the open polls and when we ask for more information, it is not being sent to us ”, explained Ripa in a message published at ten in the morning on social networks. “It is as if in a voting in an electoral college they send all the auditors out and, when they are allowed to re-enter, the votes are already outside the ballot box, without any guarantee that they are the same as the voter cast. This makes it very difficult to carry out any verification ”, Ripa argued.

Sofía Castañón (39 years old) was born in Gijón, a city where she still has her residence. He worked for various media in Asturias and in 2006 he started an audiovisual production company, according to the biography published along with his candidacy. She has directed documentaries, video clips and fiction and is the author of several poetry books in Spanish and Asturian. Since 2016 she has been a deputy of United We Can in Congress.