Domingo Cavallo: “People thought that with the corralito we would get their savings, but it was not like that” 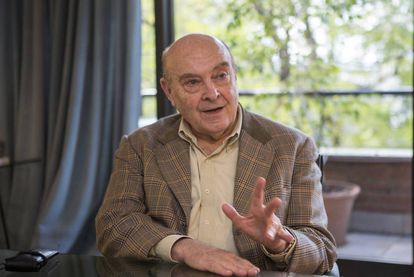 Domingo Cavallo (Córdoba, 75 years old) was twice Argentina’s Minister of Economy. In 1991, during the government of Carlos Menem, he managed to put an end to the hyperinflation that devastated the South American country with a monetary system based on the convertibility of the peso to the dollar. In March 2001, President Fernando de la Rúa thought that the father of “one by one” was the only one capable of saving a model that by then was showing signs of exhaustion. Cavallo will be remembered for the stability of the nineties and also for the “corralito”, as the limitation of cash withdrawals that he imposed to stop a drain on deposits that threatened to cause the collapse of the entire economy was called. The collapse finally occurred. Cavallo left the Ministry of Economy on December 19, 2001 and a day later, 20 years ago today, Fernando de la Rúa lost power. “It seemed to me a crime against humanity to destroy that monetary system, so I defended it tooth and nail,” says Cavallo in this interview with EL PAÍS, conducted by videoconference from his home in Córdoba, the Mediterranean province where a good part of it was born and lives. of the year.

Answer: During the end of 2000 and during 2001, Argentina suffered a financial crisis that had to do with very adverse international circumstances. The prices of export products were on the ground, the dollar was very strong, the euro very weak and Brazil had produced a strong devaluation. But the crisis originated, basically, in the fact that the banks had been financing expenses and deficits of the provinces, and it soon became clear that the provinces were not going to be able to meet their obligations. That creates doubts regarding the solvency of the banks. Then, large depositors began to withdraw deposits and bondholders began to distrust the sustainability of Argentina’s debt. All this made us enter a very difficult period, which could only be exited with an orderly debt restructuring process, which was not easy.

Q. There were also political problems …

R. During that period, the De la Rúa government, which I had joined without being a member of the Radical party and having competed against them, began to have internal problems. There were people who began to boycott the De la Rúa government and to accentuate the destabilization of the financial system. In addition, the IMF, which until then had supported us with very small amounts of resources, due to an error, in my opinion, by the managing director at the time. [Horst Köhler], denied us a disbursement that corresponded to us in the month of November 2001.

P. Did the refusal of the IMF accelerate the crisis?

A. It caused a bank run and the only way to prevent the total collapse of the system was to put a restriction on the withdrawal of cash from banks, not on the use of deposits to make payments. You couldn’t get tickets for more than $ 1,000 a month. In reality, at that time, retirees were allowed to take 100% of their wages and the rest of the population were allowed to cash out up to $ 250 per week. The bulk of the population earned less than $ 1,000 per month. So all of that was all used as an excuse.

Q. An excuse for what?

R. There were those who had borrowed in dollars, large companies that occurred to them that if they put the monetary system of the time in crisis they could solve their financial problems. They said: “If we go out and transform the debts in dollars into debts in pesos, then the central bank will be able to issue many pesos, that will produce a huge devaluation and we will liquify the debts.” Of course, the other side of the coin was that the savings of the entire Argentine people were going to be stolen.

Q. Why did the middle class take to the streets against the so-called “corralito”? It was the time of the cacerolazos …

R. Because the corralito, in light of how many journalists presented and disseminated it, who in my opinion were already working for those who wanted to destabilize the system, confused people, who thought that we were taking away their savings. And it turns out that he protested to get me removed from the Ministry of Economy. That caused the fall of the De la Rúa government, because the only one who was working hard to try to solve the problems in that government was me. Not because the other ministers were bad, simply because the problem was economic.

Q. How do you personally remember that time, under so much pressure?

A. Imagine when one is struggling to winnow greater evils. I wanted to avoid both the default external and internal such as devaluation, and of course, and above all, that a monetary regime that had ensured ten years of stability in a country that had had decades of inflation and even hyperinflation should not be abandoned. It seemed to me a crime against humanity to destroy that monetary system, so I defended it tooth and nail. And I spoke with the main political leaders. There was support not only from De la Rúa, but also from important governors.

P. And why did those supports not reach?

R. Because the destabilizers, those who wanted to get out of debt through compulsive pesification, worked on [los expresidentes Eduardo] Duhalde and [Raúl] Alfonsín. Alfonsín thought that everything from the 1990s was going to fly through the air; and Duhalde had an inordinate power ambition, he had lost the 1999 election [contra De la Rúa] and he wanted to be president. They sheltered someone who was the stone of scandal, the lord [José Ignacio] De Mendiguren, president of the Argentine Industrial Union, who wanted the convertibility to be destroyed to get rid of debts regardless of the consequences. And they moved in that direction. With the pesification, the price of the dollar jumped to four pesos and caused inflation, a fall in real wages, an unusual increase in poverty, and a deterioration in pensions. And they virtually expropriated all the investments that had been made to modernize Argentina, the privatizations. The political solution they found was to blame me, De la Rúa, and Menem. I became the scapegoat and of course they put in an infernal propaganda machine that to some extent still continues.

A. Not at all. The United States asked Köeler to give us a reinforcement of 8,000 million dollars in August and to commit 3,000 more to support the orderly restructuring of the debt. But there the attack on the Twin Towers occurred and the US, which was natural, had its mind set on Afghanistan and Osama Bin Laden. What was unjustifiable was that the IMF let go of our arm at a critical moment. We had managed to restructure more than 50% of the debt, with a three-year maturity extension, and we had already produced an interest savings of $ 2.5 billion a year with a mechanism called a guaranteed loan.

Q. Would you compare that economic moment with the current one?

A. It is totally different. At that time, the crisis was typical of countries that have a healthy currency, a monetary and financial system that works, such as Europe in 2010 or the United States in 2008. It should have been resolved as those crises were resolved, without throwing the system overboard. monetary.

P. But Europe issues euros and Argentina does not issue dollars …

R. The countries faced the problems of their indebtedness with restructuring programs, in particular Greece, and made the fiscal adjustments that had to be made in order not to continue depending. That is what had to be done in Argentina. It could not issue dollars, but as had happened in 1995, when Tequila hit us, if the Government took adequate measures, it was possible to regain confidence. What Argentina needed was for the Argentines not to get scared and take their money.

Q. Has Argentina learned anything from the 2001 crisis?

R. Argentina is learning from the experience of the last 20 years, 2001 and 2002 and what has happened since then. That is why I am optimistic about 2023 onwards. I believe that the next government will be well prepared to somehow resume the system of economic organization that was abandoned in 2002. With good relations with the world it will be able to move forward, stabilize and grow. Now we are very badly governed. They are with anachronistic ideas and the ingredient of rationality that Alberto Fernández was supposed to incorporate, which seemed reasonable, has not happened.

R. Macri had the intention, but did not have a proper diagnosis. In addition, the electoral campaign had led him, to neutralize that he was going to produce a painful adjustment, to say that he would not make an adjustment. That sadly made his government unsuccessful.

Q. What do you say to those who ask for your opinion?

R. That completely different rules of the game are needed than those that are in force at the moment, and that they resulted from reversing the good reforms that had been made in the nineties. Argentina cannot think as a closed economy, isolated from the world, prohibiting exports, with obstacles to imports that are key for internal activities, controlling all prices and exchange rates. It runs counter to what is a good organization of the economy.

Q. How will history remember you?

R. That does not worry me. I was always very calm with my conscience, because I know that I did everything that was due. I even forgave the many who unjustly attacked me. Imagine that they once put me in prison accusing me that I had been responsible for the export of arms to Croatia and Ecuador, something absurd. They made my family suffer a lot. All that does not afflict me, intelligent and well-educated people will remember me well. What worries me is that they stop attacking a reform and a transformation that was very positive for Argentina, because if not, the governments will not find the way to regain stability and growth.

Subscribe here to the newsletter of EL PAÍS América and receive all the informative keys of the present time of the region.