Xavi: “Always having seven first-team players on the pitch is a pretty stupid rule” 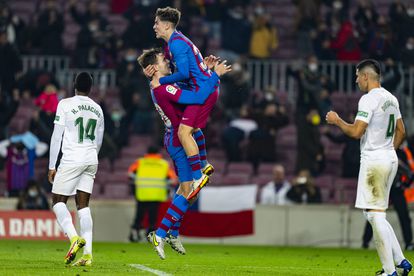 LaLiga regulations indicate that in a match there is an obligation to have seven first team players always on the table. A condition that makes Xavi and this Barcelona uncomfortable, now that the youngsters are pushing so hard and they have earned their place with the ball at their feet. That is why the Barça coach always puts only three players from the subsidiary in the once and, in case of making changes, if the one who enters the field of play is from B, he must high-five with another footballer from the second team. “The other day I make the alignment and Carles Nadal tells me [el delegado] that, if there is an expulsion of a player from the first team, we will lose all three points ”, lamented the Barça coach.

It is possible that in that hypothetical line-up Frenkie de Jong did not start, since the coach has made it clear that he has Gavi and Nico by definition. It happened that as Barça now does not have a center forward -Memphis is injured, Kun retired and Luuk de Jong has lost his place due to poor performances-, Xavi chose to give the alternative to Ferran Jutglà, from the subsidiary. Gavi also played – title in 11 of the last 13 duels – and Abde did, who for now is the winger who has given the most performance, the coach’s right eye. “It’s a pretty stupid rule, maybe it was made for the last games of the season and those of the Cup. But if we look at grassroots football, I think this is how we are covering the progression of footballers,” Xavi complained. So he revealed: “We are looking to make the first team file for some of these footballers in January because they are starters.”

One of them is Gavi, who gave an assist and scored a goal in the last round against Elche. “The club is working very well to do it, but we have to renew it now,” said Xavi, knowing that he is one of the footballers who charges the least and that he has a clause of 50 million, very attractive for teams with the economic potential that Barça lost along the way. “If necessary, we will put money together. But not just him. We cannot lose Abde, Ansu, Pedri, Araujo … They are the future of this club ”. He also complimented Jutglà – ”he understood when to uncheck support, when to receive or jump into space. He has that understanding of the game – and, above all, Nico: “Attack the spaces and understand the game. He is a total player, perhaps the most modern in this sense. He is also strong psychologically because he is not afraid to play. He has played for 6 many years in the quarry, but since we have Busquets, we are promoting his arrival in the area because he attacks space very well ”.

But Xavi knows that this Tuesday against Sevilla (9:30 pm. Movistar) he will only be able to choose three players from the subsidiary again if he does not want to risk losing the game automatically by not having seven first-team players on the pitch. Nico, Gavi, Jutglà or Abde will find their bones on the bench. And the rival is not easy: “Sevilla is an example for how Lopetegui works, for how Monchi signs and for his philosophy in general. But we have 10 of the 15 points that we have played in the League and we have a huge opportunity to sneak into fourth position, “reflected Xavi.