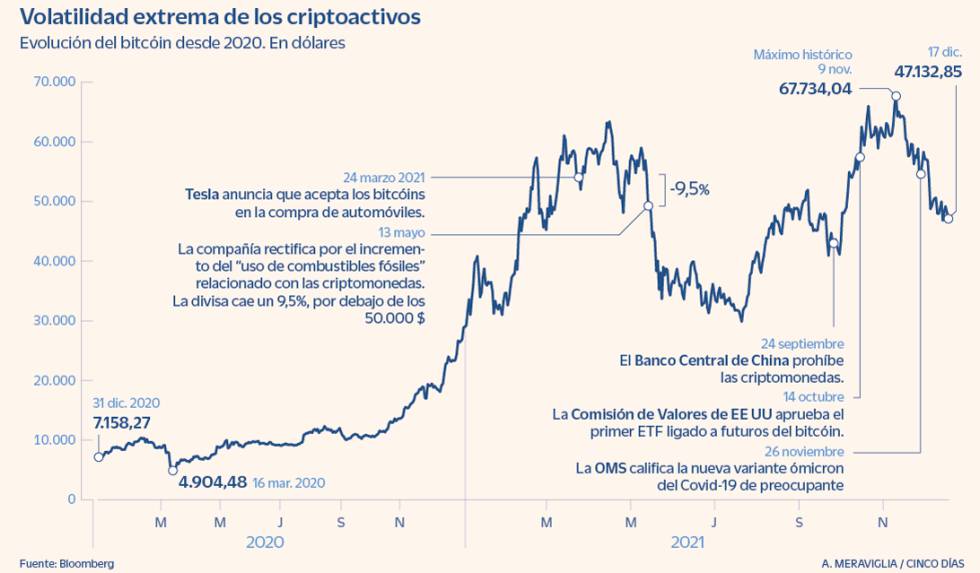 The norm that the market craves for legally backed crypto asset services to be provided is still brewing in the EU. After passing through the Council, which represents the 27 governments, the effective entry into force of the text has been delayed until well into 2024.

The latest draft of the MiCA regulation (acronym for markets in crypto-assets) expands the application for most cryptocurrencies, including bitcoin and the rest of digital currencies, one of the most urgent issues, at least for the Spanish financial supervisors. The Bank of Spain and the National Securities Market Commission (CNMV) have launched their own crusade against these assets, given the investment greed they have aroused due to the spectacular revaluations accumulated in recent times. Bitcoin has gone from being paid at $ 800 at the end of 2016 to a record close to $ 68,000 last November. It has skyrocketed 8,500% in five years.

The new terms anticipate that, for these assets with high volatility and a strong speculative component, the regulation will be applied in the first half of 2024, predictably in May or June. Sources consulted in the industry warn that Spain will be left behind, unless measures are taken immediately. Among other countries, Germany, France and Luxembourg are already acting to have a regulatory framework for them to develop. In Portugal they have also chosen to facilitate an attractive tax system to become a magnet for the crypto industry.

“In Spain we have to do the same, we cannot wait this time for the publication of the European regulations, as the cryptoactive regulation drafts themselves contemplate and promote […] national progress without waiting for general regulation in the member states “, warns Gloria Hernández Aler, partner of the regulatory advisory firm finReg 360º.

Thus, the draft European regulation provides for a simplified procedure to recognize authorized suppliers according to the regulations of the different countries. In other words, the enactment of national regulation is encouraged. What’s more, crypto asset providers that have a national authorization will be able to continue providing services even after MiCA comes into force. Financial supervisors, such as the CNMV and the Bank of Spain, invoke community regulation, but each State has the ability to position itself to have an advantage.

The first draft of the standard, dated September last year and prepared by the European Commission, provided for a period of 18 months from the entry into force for its effective application.

The latest version has changed the dates. On the one hand, it advances six months the use of the standard for virtual currencies linked to assets (stablecoins) and for crypto assets referenced to the value of a legal tender (e-money tokens, in the slang). On the other hand, it delays until 24 months the application of the regulation to all other activities, including bitcoin and other cryptocurrencies, since the document is definitely approved.

The legal sources consulted foresee that the text will receive all the compliments of the different institutions in the first half of next year. Most likely, as often happens in the Twenty-seven club, the green light will be left for the last moment, until May or June, so that the effective application of the regulation, two years later, will be delayed until that same month. in which it is published in the Official Journal of the European Union, but in 2024.

It is true that European regulations are directly applicable – they do not have to be adapted to national regulations, unlike directives – but there is usually a transition period until they are mandatory. Now, different governments have kicked regulation forward.

The B-side of stablecoins

Acceleration. The latest draft of MiCA delays the regulation of cryptocurrencies in general, but accelerates that of those referenced to assets (stablecoins) and those of electronic money tokens. Gloria Hernández Aler, partner of finReg 360º, explains that this part is of particular concern to supervisors. “The origin of this concern was Facebook’s project to launch its own stablecoin, initially called Libra and later Dien. The project has been transformed into a payment wallet, called Novi, which uses an existing stablecoin, Paxos, referenced to the dollar ”, he adds.

The danger of tech giants. The expert points out that a stablecoin promoted by a technology giant (its own or third parties) can pose a risk to financial stability. Thus, the terms are shortened to one year for these assets; the regulation will be applicable from 2023.

Risk. “The lack of regulation in Spain places us at a disadvantage, makes issuers and providers look for other jurisdictions and exposes us to lose another opportunity,” says Hernández Aler.