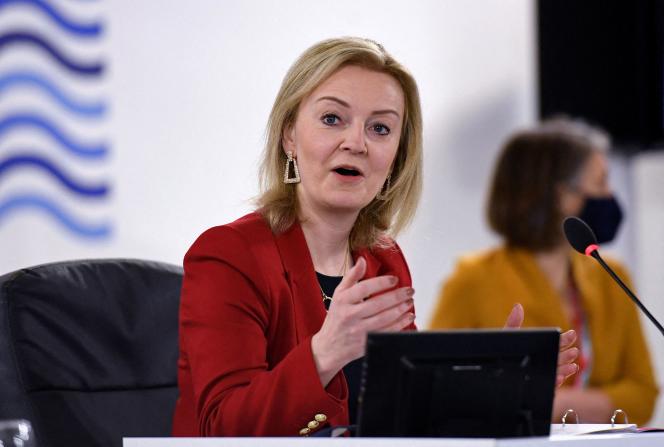 British Foreign Secretary Liz Truss speaks during a session of G7 Foreign and Development Ministers, with invited countries and ASEAN nations, on the final day of the summit in Liverpool, in Great Britain, December 12, 2021. POOL / REUTERS

She will now lead negotiations with the European Union on Brexit. The British Foreign Minister, Liz Truss, was chosen on Sunday, December 19, to take up this dossier. His appointment comes after the resignation of Secretary of State for Brexit David Frost, at the end of a particularly trying week for Boris Johnson.

Head of British diplomacy since September, Liz Truss, 46, will lead negotiations with the EU on the controversial protocol governing specific customs arrangements in Northern Ireland, according to a statement from the British Prime Minister’s services. “Liz Truss will assume ministerial responsibility for relations with the European Union with immediate effect”, specifies the text.

Read also Article reserved for our subscribers Fishing, Northern Ireland: the negotiations between London and Brussels at an impasse

European Commission Vice-President Maros Sefcovic reacted on Twitter that he “would continue to cooperate with the United Kingdom in the same constructive spirit”. After initially defending staying in the European Union during the 2016 referendum, this former Minister of Foreign Trade had changed her mind, explaining that she saw Brexit as a source of economic opportunities. Liz Truss enjoys a strong popularity in the ranks of the conservative majority, to the point that her name regularly returns to succeed the Prime Minister.

Citing disagreements with the direction taken by Boris Johnson’s government, Brexit Secretary of State David Frost tendered his resignation on Saturday evening – precipitated by his revelation in the press – amid difficult negotiations with the EU over the implementation of the Northern Irish protocol were unsuccessful. They are due to resume in January.

Two years after his electoral triumph on the promise to achieve Brexit, Boris Johnson finds himself surrounded by scandals. This week he received a sling from his camp over measures against Covid-19, then the loss of a Conservative stronghold in a by-election in England. It is also facing a surge in Covid-19 cases, due to the Omicron variant.

In his resignation letter, David Frost cited the new restrictions to fight the coronavirus, the tax hike and the policy followed to achieve carbon neutrality by 2050 as the reason for his departure. “You know my concerns about the current direction of things,” he wrote to Boris Johnson, stressing that, with Brexit assured, “the challenge for the government now is to realize the opportunities it gives us. “.

Boris Johnson said he was “sorry” for the resignation of David Frost, expressing his gratitude for the work he has done. Health Minister Sajid Javid told Sky News “to understand the reasons” which led David Frost, “a man of principle”, to leave.

On Times radio, the former North Irish Prime Minister Arlene Foster, pushed to leave in April because considered too moderate, judged the departure of David Frost “very, very disappointing”, believing that he “understood” the problems created by the new post-Brexit arrangements in Northern Ireland.

The Deputy Leader of the Labor opposition, Angela Rayner, ruled on Twitter on Saturday evening that the government was “in total chaos precisely when the country is going through weeks of uncertainty”. “@BorisJohnson is not up to the task. We deserve better than this buffoonery, ”she added.

“Rebuilding a climate of trust”

Holding a hard line against the EU, David Frost led the negotiations for the Brexit agreement for London and then its implementation, especially concerning the Northern Irish protocol. Created to avoid any land border which would risk weakening the peace agreement concluded in 1998 after three bloody decades, this text maintains the British province in the single market and the European customs union.

The United Kingdom and the EU have been trying for several months to agree on the implementation of the text, effective since the beginning of the year. While David Frost has taken an inflexible stance in demanding that any recourse to European justice for the settlement of disputes be ruled out, the government recently seemed to soften its position on this matter.

“We had difficult relations, but we have always continued the Franco-British dialogue”, tweeted the French Minister for European Affairs, Clément Beaune, greeting “with respect” David Frost. “It is time for the British government to rebuild a climate of trust with France and the EU, in the interest of all”.

Read the decryption: Article reserved for our subscribers France – United Kingdom: the multiple reasons for a deep quarrel