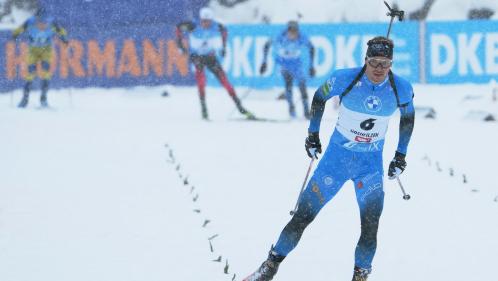 This biathlon weekend in Le Grand-Bornand could not have ended in such a beautiful way as with this magnificent double achieved by Emilien Jacquelin and Quentin Fillon Maillet. On the first mass start of the season, Sunday, December 19, the first preceded the second to seize at the same time the yellow bib of leader in the general classification. Norwegian Tarjei Boe completes the podium.

Double world champion in pursuit (2020 and 2021), Emilien Jacquelin had never won a “classic” World Cup round, it is now a done deal. And how. At home, in Le Grand-Bornand, the Isérois dominated the first mass start from start to finish to win solo.

“Who dares wins”, he likes to repeat. In front of 20,000 spectators in a trance, he combined words with deeds. On the last standing shot, the 26-year-old biathlete lived up to his nickname Lucky Luke by swinging all five targets as fast as his shadow to soar to victory. “I did not want to be afraid as I could have been afraid yesterday on the standing shot”, he reacted on the channel L’Equipe after his victory.

Only a fault on the third shot gave a little suspense to a race he had taken care to crush before. Because after the first shot where 19 of the 30 biathletes at the start had succeeded without fault, Emilien Jacquelin decided to accelerate without calculating, as usual in the end. “I wanted to do this race my way, it was premeditated. I had said that if I filled it up on the first shot, I was going to blow up the race. The best way was to take the race on my own. “

Not many people have been able to compete with him since the start of the ski season. Perhaps Sebastian Samuelsson, leader of the general before this weekend, but he was too feverish behind the rifle with four faults and had to be satisfied with the 9th position.

Or Quentin Fillon Maillet. Already victorious on Saturday in the pursuit, the Jurassien missed one more target than Jacquelin. Too fair then to hope to steal victory from him despite a last cannon lap. He finished three seconds behind his compatriot but was able to contain the return from behind Tarjei Boe, finally third.

Wearing the yellow leader’s bib in the general classification at the start of this mass start for the first time in his career, QFM therefore leaves his tunic to his teammate. Emilien Jacquelin will spend the holidays in his possession before donning it at Oberhof (January 6 to 9). It is already the third tricolor to wear the yellow jersey after Simon Desthieux and, therefore, Quentin Fillon Maillet.

Above all, the recent consistency of Emilien Jacquelin (already three podiums this season before his victory) augurs well for a battle for the general throughout the season. But before thinking about it, he will be able to contemplate his Christmas present that he gave himself as a big one. You are never better served than by yourself.