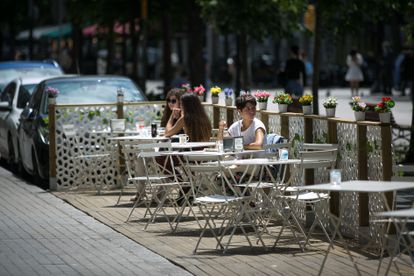 Several clients on the terrace of a bar in Barcelona.Albert Garcia (EL PAÍS)

The negotiation on the labor reform enters its final stretch. With less than two weeks to go until December 31, the deadline agreed with the European Union, the Government, trade unions and employers have still not agreed on a final text that satisfies all three parties. Not at least in a sufficient or global way, despite the fact that, as recognized by different sources present at the meetings, the general sections of the new framework that aims to regulate labor relations do not generate an insurmountable disagreement.

At the same time that the calendar pages are falling, a dialectical battle of doors to the outside has been waged for weeks in a parallel scenario to that of internal negotiation with which the social agents try to pressure each other. “Addressing the main problem that the country has, which is temporality, is an exciting challenge for everyone,” said the vice president, Yolanda Díaz, on Friday, who acknowledged being “moderately optimistic” with the possibility of obtaining the approval of unions and employers. “I want to be cautious, but I think it is possible to achieve it,” he added. Sources close to social dialogue assure this newspaper that the current situation does not point in that direction.

In these days, the also Minister of Labor will initiate a round of contacts with the different political parties that make up the majority of the Government in Parliament and to whom she is going to communicate the status of the negotiation and the most outstanding aspects of the proposals that are found. on the table. The intention is to try to gather enough support within the chamber. The document currently being handled by the Executive satisfies the demands of the nationalist parties ERC and PNV in terms of collective bargaining, since it eliminates the possibility that the state agreement may condition the autonomous community in matters as important as salary or hours.

Cautions about whether a tripartite agreement will be achieved have abounded in recent weeks. Unai Sordo, general secretary of CC OO, already expressed himself in the same terms as Yolanda Díaz during an informative breakfast at the beginning of the week, and this Friday he again made his skepticism clear: “Things are not bad, I am not pessimistic, but it is still not closed, “he said. In addition, he pointed out a detail that perfectly defines the main obstacle faced by social agents: “If everything is not closed, nothing is closed.”

Government and unions try to portray employers as the cause of the blockade. An overexposure that Antonio Garamendi, president of the Spanish Confederation of Business Organizations (CEOE), did not hesitate this Friday to get rid of. “If we have to say no, we can do it before the end of the year, but it would be sad if there was some pending point because the Government has considered that it is such a date and everything will run away, when in two more days or two more weeks it could solve ”, indicated in RTVE.

The sections that still need to be filed before the end of the year are the determination of the number of days in which eventual contracts may be used for production reasons (the Government’s proposal is 90); the establishment of a sanctioning regime that punishes the fraudulent use of eventuals; the strengthening of the fixed-discontinuous contract; as well as the establishment of the sectoral agreement above that of the company, especially so that it acts as a minimum framework when setting salaries.