At the Reina Sofía there is not a single artist who is the center of the collection, national and international, rather there is a duel of colossi in which anyone, a collective author, would deserve that honor. And although we all agree that the main attraction is the Guernica, by Picasso, and the very ambivalent paintings by Dalí and Miró, in the new presentation entitled Communicating vessels (2,000 works grouped on six floors, between Nouvel and Sabatini) an inescapable dialectic arises, in line with Manuel Borja-Villel’s usual desire to enrich both the great and the small personalities of Spanish art of the last 100 years, aligning them with others, mostly from the Latin American continent, the United States and Europe (with some appointments to the Middle East and China), as the museum director defends the need to make the works of essential men and women shine — a key element by which it is earned our admiration – and at the same time represent the offended, displaced, migrants and angry because of the intolerable inequalities that provoke the violence associated with colonialism, wars and the supposed universality of the logic of the market (capitalism).

That said, the critical question is in what way do musealized works of art avoid manipulation and deception (of the curator, of the receiver) insofar as they are not self-referential (as opposed to, say, a brancusi, although we know that even their own materiality can be falsified), but do they refer to the outside world? The new collection gives a “possible” answer, better two; The first is assuming that the world, what is out there, does not have to be “true” since reality does not always manifest itself in our experience. And paradoxically, outside the museum you can gain the experience that is often denied to the visitor to these new cathedrals of art. Although museums are shielded within walls and borders, triumphal wrappings designed by big firms at outrageous costs, we can experience this art in the streets and squares. Because since Baudelaire, the modern city has been the place of fantasies and conflicts, a museum of infinite fertility that could seem vulnerable to cultural criticism and yet, as has been demonstrated in the last decade (15-M, Me Too, arab springs, Black Lives Matter), has managed to modify the criticism. The second question has to do with time. At the Reina Sofía, history is re-presents as genealogy, anachronism, rupture, a radical discontinuity that looks to the future in the different forms of resistance. And it is in those where the strength of the various modernities produced by that involuntary memory of which Georges Didi-Huberman speaks is affirmed, by which the viewer is invited to evocatively contemplate the past (memory is not history) prepared for the shock, that irruption or appearance of time that manifests itself “like the tearing of a veil.” This is the sensation that the visitor will have, that of being in a labyrinth without knowing where the spaces begin and end, immersed in a plethora of time, between the conscious and the unconscious, like the “communicating vessels” referred to in the text. (1932) by André Breton.

Arguing against historicism, an artist creates the work at a time and place, and the viewer (“the masses are the artist”, announces the epigraph of the influential German historian Carl Einstein in one of the areas of the journey) has to place it within from a political horizon, motivated by the ambition to understand our current condition and to be able to change it. This allows us to see the collection as an interruption of the eclecticism and relativism of most of the major collections – the MoMA, the Pompidou and the Tate – where artistic movements and trends on the page, conveniently ordered by themes or periods, they present the same validity. 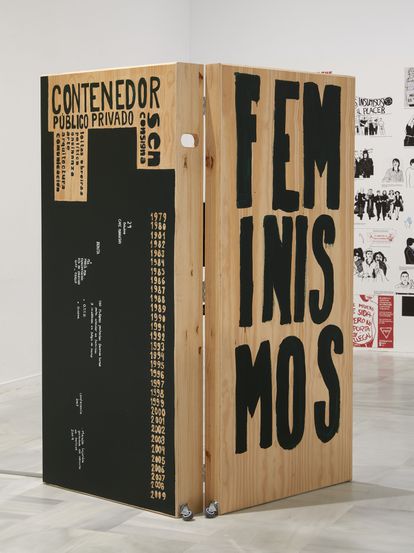 ‘Container of feminisms’ 2009-2010, mobile project designed to collect the memory of feminisms in public space, in the permanent collection of the Museo Reina Sofía

“Art has no importance, it is life that counts, it is the story of these years to come, the creation of the most gigantic collective work in history”, we read in a message from the Argentine artist Roberto Jacoby (Manifesto on blackboard in an action for the Di Tella Institute, 1968/2011) in one of the eight episodes of the collection, in line with the covers of Euclid’s Mail, by Max Aub, with the phrases printed in different types: “Our past is tomorrow. The expansion of the Universe, mirage. We live the other way around. Chaos is our future. The oldest is the past, then towards it we go. And, if not, at the time”. These are just two examples that summarize the momentum of the collection where magazines, posters, architectural plans and models, photobooks and the underground, because without these documents we stop thinking.

The Reina Sofía is a museum that collects “museums” with the idea of ​​questioning its own order, and this is one of the lines of its restricted action (Mallarmé): show constellations of works where traditional media are not a priority, look at how certain samples have been received – Rudi Fuchs’ Documenta 7 (1982), international fairs, world exhibitions and exhibitions of Spanish art at MoMA and the Guggenheim in New York (1961), Picabia in the Dalmau galleries (1922) or the critics Carl Einstein, Bataille and Breton, each interpreting the work of Dalí, Picasso and Miró in their own way.

There are abundant works that deserve a separate appreciation, some disturbing, such as Dalí’s “father’s room”, or the confrontation between the suburban house of the Eames, which reflects the prototype of American individualism in mass society and their fascination for the appliances and furniture in a neutral space (according to MoMA criteria), and the room with the Richard Hamilton exhibition, Man, Machine and Motion (1955), a visual study of the relationship between humans and machines, made up of 54 panels fixed to a steel structure divided into sections (aquatic, terrestrial, aerial, interplanetary) with photographs from a time when these devices they had something magical about them and hadn’t yet become a consumer trap.

You need a good dose of vitality, intellect and emotions to enjoy this not definitive collection from Reina Sofía. Like Poussin’s painting, it is a dance for the music of the time, especially in our time when everything is redundant.