Coupe de France: Nantes is close to the exit, the feat of Nancy, the little ones in the mat … What to remember from the 32nd finals played on Saturday 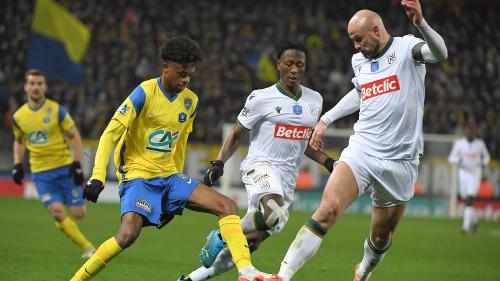 After a Friday evening sadly marked by the incidents at Paris FC-Lyon, the Coupe de France resumed its rights, Saturday, December 18, for the rest of the 32nd finals. AS Nancy Lorraine donned the costume of David facing the Trojan Goliath. On the other fields, the logic of the higher rank was respected, even if Nantes were very hot against Sochaux.

Canaries through a mouse hole

In a match reminiscent of a great classic of what was then called Division 1, Nantes struggled terribly to assert its rank against Sochaux. The Doubistes, current 5th in Ligue 2, were on a par with Nantes for 90 minutes of a dull and scoreless match before seeing their dream of qualifying fly away during the penalty shoot-out. Tenth shooter to launch, while no attempt had been missed so far, the unfortunate Diedhiou saw his shot stopped by Descamps. Qualified (0-0, 5 tab to 4), Antoine Kombouaré’s men therefore continue the adventure through the smallest of doors.

[TIRS AU BUT]@Rmydescamps made the stop in front of Diedhiou!

Moribund in the league, where they are in last place in Ligue 2, the Lorrainers created a sensation by winning (4 tab to 2, 1-1) in Troyes after a stunning match. Reduced to eight at the end of the match, ASNL managed to snatch the penalty shootout against the Ligue 1 residents who had yet opened the scoring. But, by dint of self-sacrifice, Benoît Pedretti’s players managed to tip the scales to offer themselves a real breath of fresh air in a tainted season.

To the defeat of Panazol was added that of Chemin-Bas d’Avignon, beaten by Clermont (0-4). Note that this match had to be interrupted following an intrusion on the lawn of an individual. An incident without comparison with those of the day before but which contributes to the degradation of the image of French football.

Match stopped at the 76th between Chemin Bas d’Avignon and Clermont. A spectator entered the lawn of the Costières stadium. #FBsport pic.twitter.com/AXSOgiDjBD

Montauban shared with Panazol and Chemin-Bas the title of Petit Poucet for this 2021 edition, the three teams playing at the 7th national level, and will be able to keep it if he wins against La Roche (national 3) on Sunday.