Future of the Orange Women: the 20 greatest talents in the Netherlands 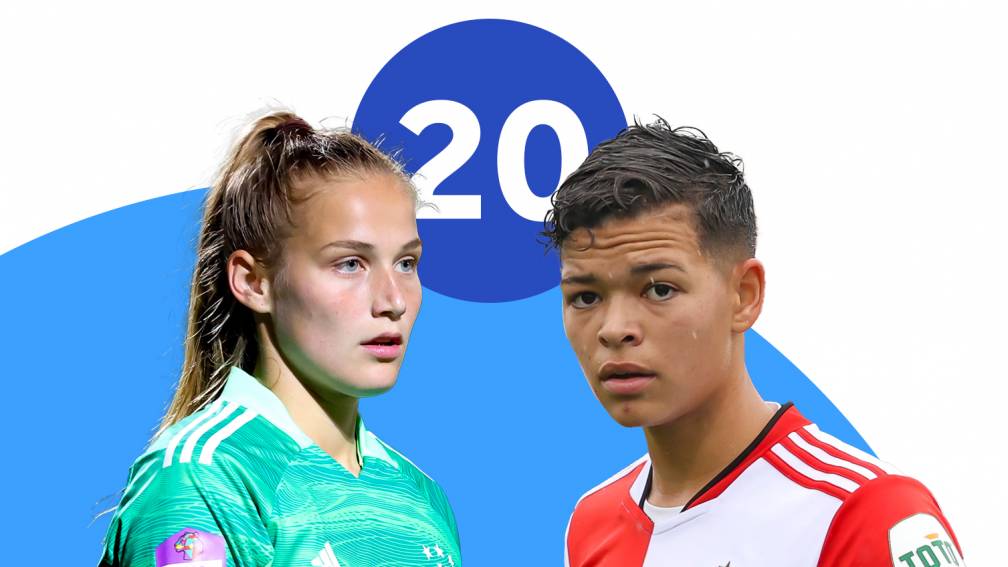 What is the status of the succession of the Orange Women in the near and somewhat more distant future? For the fourth time, NOS lists the twenty greatest talents under the age of 20 – players born in or after 2002 – in women’s football.

The ease with which Esmee Brugts entered the Eredivisie is special. Immediately in her first year at PSV, there were goals, assists and great actions. This season the pressure is higher. PSV is going through a difficult phase and Brugts is expected to make the difference. That’s difficult. One thing is certain: she is one of the greatest talents in the Netherlands. Her dream to one day play for a big club abroad seems to be only a matter of time. Brugts is therefore the leader this year.

When this list came out last year, Jill Diekman had only just made her premier league debut.

She impressed from minute one; the football intelligence is bursting with PEC’s midfielder. She has a rare vision with the look ahead. It quickly led to a first professional contract, a basic place and an election for the Orange squad under 19.

The youngest player on the list this year, but Wieke Kaptein is used to being the youngest.

As a 15-year-old she played with FC Twente in the preliminary round of the Champions League, even before she had played a minute in the Eredivisie. But there is little to notice on the field of youthfulness and Kaptein is already regularly in the base. Twente fans have already bombed the midfielder into the future playmaker of Orange. They may well be right.

What a month Samantha van Diemen has had. Switching from Ajax to Feyenoord, the club that would turn out to be the big surprise of the first half of the season. Becoming one of the driving forces behind the success and suddenly – to your own surprise – being allowed to trot at the big Orange.

There, Van Diemen immediately played ninety minutes in her debut against Japan, although the central defender had to do that as right back.

Only 16 years old and thus for the first time, but probably not the last on this list.

Isa Kardinaal made her debut last month – according to Ajax tradition – at a young age and immediately became woman of the match. The central defender is seen as a great talent with good insight, speed and a good pass in the legs. So keep an eye on this Isa Cardinal.

Unfortunately, we did not see much of Ella Peddemors in 2021. The year was dominated by rehabilitation after she tore her cruciate ligament a year ago during a training. She did this together with fellow club member Vaclav Cerny, who was in the same boat. But: Peddemors is back. Her first starting position (in her beloved midfield) immediately resulted in a goal against ADO this month.

Liz Rijsbergen is a crowd pleaser, a winger who became a trendsetter in the Eredivisie last season out of nowhere. This season, both Rijsbergen and her club are a bit more changeable. That is not surprising at this age. But Rijsbergen continues to make her minutes, also with the Dutch Juniors, and suddenly has the taste again: she scored four important goals for ADO in the past three games. That tastes like more in the coming months.

A dilemma for the creator of this list: do you put someone in a top 20 if she hasn’t acted in almost two years? You can see the answer here. Two years without competitions is a long time, especially at this age. But there is no doubt that Abali has talent, so even with that setback she can get there. Hopefully we will see her again soon in midfield in The Hague and in an Orange shirt.

Last year it said: op de Toekomst sings about how talented Iris Stiekema is. Not much later she made her debut in Ajax 1. Unfortunately, the physical situation is not going well for the midfielder and we therefore have to wait a little longer for her real breakthrough. The fact that despite this setback Ajax has confidence in its abilities, it became clear when they signed a contract until 2024 this year. And why shouldn’t they? She is intelligent on the field, technical and picks position well.

The persistence wins, Lisan Alkemade must have thought when she signed in Eindhoven this summer until 2023. She had only just made her debut for PSV at that time – as a goalkeeper it is simply more difficult to take your minutes than as a field player. As second choice behind Sari van Veenendaal, she was allowed to keep a number of matches this season, but we have not yet seen the real leap into the deep end. Hopefully we’ll see her in action more often at the highest level in the future.

She comes from her own youth academy and immediately became a crowd favorite when she scored two goals against sc Heerenveen on her home debut at Varkenoord. As a reward for her good season, she was allowed to make her debut in the Dutch Juniors last month.

VV Alkmaar likes to see itself as a training club, the first phase in a career after which steps are taken towards the top. That’s how it went with Katja Snoeijs, for example. Emmeke Henschen could be the latest example of this policy.

She herself thinks that she should be a little more present in midfield, but her trainer thinks she can go far. Moreover: you are captain of your club and of the Orange squad under 19 for a reason.

PEC’s midfield is full of talent and quality, despite an average age of just under 18. That is why Danique Noordman, just like Jill Diekman, is on this list. Only 17 years old and already with a year and a half of Eredivisie experience and a basic place. Earlier this year she signed for three seasons in Zwolle. It was the first time that the club had such a long contract signed and says everything about the confidence that PEC has in Noordman.

There she was, on the front page of the Spanish newspaper Mundo Deportivo among the world stars. Voted Europe’s greatest talent. A huge compliment for the striker who scores on the assembly line, especially in an Orange shirt. But also a reminder: these will be the years of truth for Tromp. A basic place at Ajax and making an impression in the Eredivisie should be the next steps.

The first half of this year, Marit Auée was still far away from the Eredivisie. She decided to study and play football in the American city of Dallas for a year. With that experience in his pocket, the defender returned to her old club in Zwolle last summer. There she is a fixture in a team bursting with young talent (as can be seen in this list). Auée defends well, has an overview and plays the ball calmly.

Starting the season as third keeper and suddenly having a basic place: Regina van Eijk would not have dared to dream it. But Lize Kop got a concussion, Isa Pothof was disappointed and there was van Eijk in Ajax’s goal. She made her debut in October and since then she has played every game with an average of one goal at a time. Not bad for a third keeper.

The youngest player on the list last year. Since her debut against FC Barcelona, ​​she signed a three-year contract with PSV and we have mainly seen her in action this season. In the youth she was still active as a goalkeeper and defender, but now she is mainly at the front of the field.

“Sitting on the couch doesn’t make me happy” said Dana Foederer and unfortunately that was what she mainly did at PSV, the club that has her heart. That is why the midfielder has been wearing the Frisian shirt with the red pompeblêden since this summer. She has not complained about playing time ever since and she has become a central point of contact for Heerenveen.

A player who played football at amateur club Saestum from Zeist. Then it is not surprising that you end up on this list. Sari van Veenendaal, Shanice van de Sanden and Anouk Hoogendijk are also from there. Koeleman is still at the beginning of her career. She made her debut with PSV in April and also plays for the Orange squad under 19 years of age.

The women of sc Heerenveen are having a difficult season, but talent is certainly there. Nike van Dijk was good for seven goals last season. She herself calls her scoring ability a strong point. Unfortunately, the counter is still at zero halfway through this football year. But Van Dijk continues to make her minutes on the flanks in Friesland and looks to Lionel Messi as a great example.