This Wednesday one of the most important feminists in the United States, the African-American Gloria Jean Watkins, who preferred to be identified by her stage name: bell hooks, the name of her maternal great-grandmother, and that hooks always asked to write in lowercase because she did not want to draw attention to your person but to your ideas. And she did it: with more than 30 books published and translated into 15 languages, hooks’ ideas transformed the history of feminism in the United States and abroad.

“Black feminism is in mourning,” said a Brazilian academic upon hearing the news. Critical theory is in mourning. Philosophy is in mourning. Education is in mourning. All those who believe in a society without barriers should be in mourning ”. The news was Announced this morning on Twitter by Hooks’ niece, Ebony Motley. “The family of bell hooks sadly announces that our sister, aunt, great-aunt have passed away,” reads their message. “The author, teacher, critic and feminist passed away early this morning at home, surrounded by her family and friends.” There are no details yet on the reason for his death, which occurs at the age of 69 in the State of Kentucky, where he was born in 1952.

“American women, without exception, are socialized to be racist, classist, and sexist, to varying degrees, and calling ourselves feminists does not change the fact that we must consciously work to shed that legacy,” Hooks wrote in Am I not a woman?, one of her most important books, from 1981. The title is a quote from Sojourner Truth, a black woman enslaved in the 19th century, a pioneer of the black feminist struggle in the United States, who denounced the discriminatory and exploitative treatment of Afro-descendant women compared to what was given to white.

Influenced by both the words of Truth and her contemporaries Angela Davis and Audre Lorde, what hooks achieved was to narrate in essays and books the importance of what is now known as intersectional feminism, one that recognizes that oppressions of women are multiple and the more complex solutions proposed by the bourgeois and white feminism of the second half of the 20th century. Hooks writes about how the struggle of black women should be visible within feminism because their experiences not only required an end to machismo, but also to the capitalist exploitation and racial discrimination that had left them discriminated against and in absolute poverty for centuries.

“Obviously many women have appropriated feminism to serve only their ends, especially white women,” the book says. “Instead of resigning myself to that appropriation, I decide to reappropriate the term feminism, and focus on the fact that being a ‘feminist’ in an authentic way is wanting all people, women and men, to free themselves from the sexist roles of domination and oppression ”.

Hooks was born when racist segregation laws still permeated all of America’s social life, and as a child she went to a segregated school just for African-American children. But then he managed to study his bachelor’s degree at Stanford University (California), his master’s degree at the University of Wisconsin and his doctorate in literature at the University of California at Santa Cruz. She was a teacher for most of her life, teaching at Stanford, Yale or the University of the City of New York (Cuny), and in her later years she returned to teach at a university in the state where she was born, Kentucky, where she died today. “If one has consciously chosen to live, then choosing a place to die is as vital as choosing where and how to live,” he wrote in his book Kentucky is My Destination. 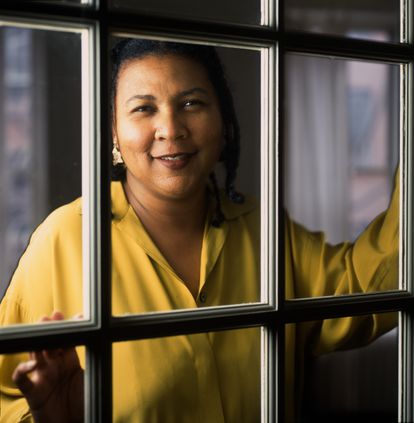 Hooks was not the kind of scholar who spoke in isolation at a faraway university but rather enjoyed participating in public debate. She wrote several essays about music or art, one famous in 2016 about the African-American female musical icon, singer Beyoncé, who had just released her album. Lemonade. “It’s pure capitalist business,” Hooks wrote in an essay published in The Guardian about the new album. There hooks reveals part of what she cultivated for years in her other works: the answer to patriarchy should not be for women to play by the rules of patriarchy, as capitalism would have it. “Men must do the work of transforming themselves internally and externally so that emotional violence against black women comes to an end,” the essay asks. “And we see no clues of [este mensaje] in Lemonade. If the change is not mutual, then the pain of black women can be expressed, but the reality in which men generate that emotional pain will continue ”.

The construction of masculinity was another of the central points of her career as a feminist writer, reflections that she left in books such as The Will to Change (The Will to Change), 2004. “We can guide, instruct, observe, share information and skills, but we cannot do for boys and men what they should do for themselves,” she says in the first chapter. Men must be involved in understanding what is the system called patriarchy, a cultural system that not only discriminates against women but one in which the masculine identity has been fractured because vulnerability is unforgivable and domination is the only way they can find to be. loved ones. “In patriarchal cultures men are not allowed to be who they are and protect their identity. Their value will always be determined by what they do. In an anti-patriarchal culture, men don’t have to prove their worth. They will know from birth that just being gives them value, the right to be appreciated and loved, ”he wrote.

bell hooks was the kind of feminist scholar who managed to have enough empathy in her writing to say that feminism’s fight for equality is not just about talking about bad males versus female victims. The system is broken and therefore its players too. Feminism, she argues, is a learning process for everyone.

In The Will to Change, Hooks also writes about his father, a man who fought in World War II, a boxer and basketball player, and a menacing figure in his family growing up. A symbol of the patriarchal violence that he studied so much. “Women and children of the world want men to die so that they can live,” he says at the beginning of the book, when he reflects on the fear that relatives have of parents like him who learned to relate to violence and rage. “That is the most painful truth about male dominance.”

One of the last great works of bell hooks, however, is almost like a float amid so much pain and violence. Is named All About Love (All about love), a book from 2001 that discusses the difficulty of loving after centuries of machismo, exploitation and segregation, but still with the hope that love – community, couple, work – will reform the systems that have broken the society. The book starts with a photo of graffiti that hooks kept in his kitchen. “The search for love continues even in the face of great obstacles,” says the message. Hooks had just been separated from her partner for 15 years, and she didn’t want to know much about love, but the message encouraged her. “Every day when I drink water or grab a plate from the cupboard, I stand in front of that reminder that we all long for love – we look for it – even when we’ve lost hope that it can really be found.” Love, says hooks, is not a noun but a verb. Like feminism, it is not an immovable label, it requires constant commitment, care and empathy to save that social system that hurts every day.

In a beautiful poem he wrote in 2012, Appalachian Elegy, Hooks writes of those who went before her: “Hear them cry / those who died long ago / those who left long ago / speak to us / beyond the grave / guide us / so that we can learn / all the ways / in which that we can take care of this land ”. bell hooks left this Wednesday after 69 years of life, leaving many clues to learn how to take care of her.