VIDEO. Presidential: Valérie Pécresse “has feverishness as a motor and hypocrisy as fuel”, tackle Gabriel Attal 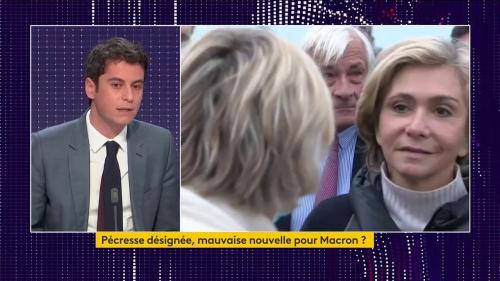 Valérie Pécresse “has feverishness as a motor and hypocrisy as fuel”, affirms Gabriel Attal, government spokesman, this Tuesday on franceinfo, about the candidate Les Républicains for the presidential election of 2022 who announced to seize the CSA against the broadcast of an interview with Emmanuel Macron on Wednesday evening on TF1 and LCI, believing that the outgoing president was campaigning without saying it.

Gabriel Attal finds it “disturbing” that the candidate LR is saying “today the opposite of what she said at the time”, in January 2012, when eight channels had broadcast the intervention of Nicolas Sarkozy, outgoing president and only a few months before the presidential election. Valérie Pécresse had then supported him.

“The President of the Republic is speaking, obviously that his word is expected on the action which is being carried out today, on the crisis, also on the results of the five-year term and it is legitimate.

“Obviously, obviously, Valérie Pécresse is afraid that the president will speak”

I find that quite surprising because when we want to convince the French, we try to talk to them, we do not try to prevent others from talking to them “, comments the spokesperson.

“There will be a campaign when the time comes. There are rules that have been set by the CSA, which are very clear, which also apply from the month of January,” he added. , also believing that opposition to the government could also be expressed in the public debate. “We heard candidates for 12 hours in prime time [à la primaire LR] criticize the President of the Republic, but we are in a democracy, that’s normal. We saw Eric Zemmour in prime time on France 2 last week, it’s normal we are in a democracy. “

Gabriel Attal also believes that “it is more of a disadvantage than an advantage for us not to be in the campaign, because we have less opportunity to respond to criticism. We have less time to do so because “We also talk about our action. We continue to make difficult reforms”, such as unemployment insurance, “because we need it for economic recovery.”