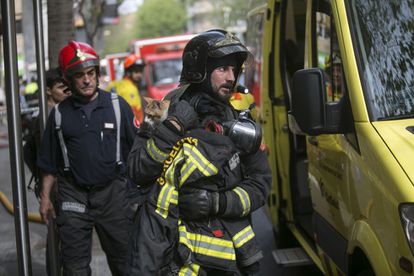 A magistrate of the contentious-administrative court of Palencia has annulled an opposition called by the City Council for the Fire Department, considering it advantageous for women. Seven of the 106 candidates filed a complaint, although during the process six gave up and only one went ahead. The Consistory will have to correct some bases that it raised in accordance with the Equality plan unanimously signed by all the political groups of the last legislature: this raises different physical marks for men and women. For example, women had to be able to perform seven pull-ups (an exercise that consists of lifting the body that hangs from a horizontal bar), while men had to complete 15. This difference between their physical marks and women occurs in the firefighting tests in Spain for years.

The judicial pronouncement, what has advanced Palentino newspaper and to which EL PAÍS has acceded, has met the demand of the plaintiff, who argued that the difference in parameters required of men and women meant “a competitive advantage in favor of women, which implied that the right to equal access was violated to the public function ”. The judge has understood that a position with the physical demand of firefighters must be accessed by means of tests that fully accredit the suitability of those registered and that “this disparity cannot be justified in a misunderstood female promotion that facilitates the access of women to the public employment ”. Among the 106 applicants, who aspire to eight places, there are only four women. This difference is similar at the national level: of the 20,000 firefighters in Spain, only about 170 are women.

The magistrate also highlights that these public calls demand not to suffer from certain physical defects or diseases that make it difficult to carry out these tasks, something that cannot be called discriminatory because “in the rescue operations of people at risk in cases of fire extinction they deserve be assisted by those firefighters whose selection has been made for being the best qualified, be they women or men ”. According to the judge, “these facilitating measures would violate the principle of merit and ability in a particularly sensitive service.”

Surprise at the Town Hall

The judicial response, municipal sources say, has been surprising. The mayor, Mario Simón (Citizens), has confirmed that the first tests, called for this Monday, are paralyzed, in order to “comply with the judicial ruling and adapt the oppositions to the requirements.” Municipal sources in Palencia assure that the City Council will take out some corrected bases, but that this setback makes an Equality plan “blow up” that all parties and unions approved in 2018 and “puts all the new calls in a bind”. These informants maintain that these conditions of disparate requirements are common in other competitive examinations, such as the National Police, where male and female candidates are not asked for the same pull-ups or the same times to travel one kilometer.

The Councilor for Organization and Personnel, Carolina Gómez, expresses her amazement at the judicial decision, even more so when the process was suspended after the first seven complaints, but the judge himself lifted this precautionary measure. “Now, the day before the exam [el viernes], cancels it ”, laments Gómez. The mayor insists that “firefighters are needed and vacancies have to be filled and volunteers are not enough.” The magistrate has requested “technical-scientific reports” that according to Palencia “have never been requested in any administration”, something that they have also seen strange in the Civil Protection Agency when they have been consulted. “Positive discrimination is included in our Equality plan but the judge does not mention it”, explains the councilor, who indicates that they are considering resorting to the Superior Court of Justice of Castilla y León but the rush they have to have these firefighters makes them need “Be very careful” but continue with the contest because they currently have only 38 troops. The next call will be for another six positions in addition to the eight already in demand.

Palencia was the first city in Castilla y León to have two women in the Fire Department after another call for public employment in 2020. So there were no complaints like the ones presented in this edition by seven men out of the 106 contestants, although six They withdrew it and only one remained in the court case that proved him right. The definitive list of admitted to the firefighter driver tests, which is open and within the reach of any citizen, reveals that of that hundred registered there were only four women supposedly benefited by those conditions that the judge has rejected.

The exact requirements demanded in the call, published in the official gazettes of Palencia and Castilla y León last May, involve demonstrating identical knowledge for men and women about the Palencia street map or the driving of fire fighting vehicles. The difference comes on the physical plane, since a minimum of 15 pull-ups are required from them and seven from them; a vertical jump of 95 centimeters for men and 85 for women; a male maximum of 14 seconds in running 100 meters and 17 for female applicants; or the throwing of eight meters of medicine ball for men and 6.25 for women. Municipal sources maintain that these criteria were very similar in the 2019 contest, in which two women approved the public opposition, and received no complaints. That promotion had 92 applicants, from which five men were also chosen.