In view of the Synod on Synodality, the speaking out is organized 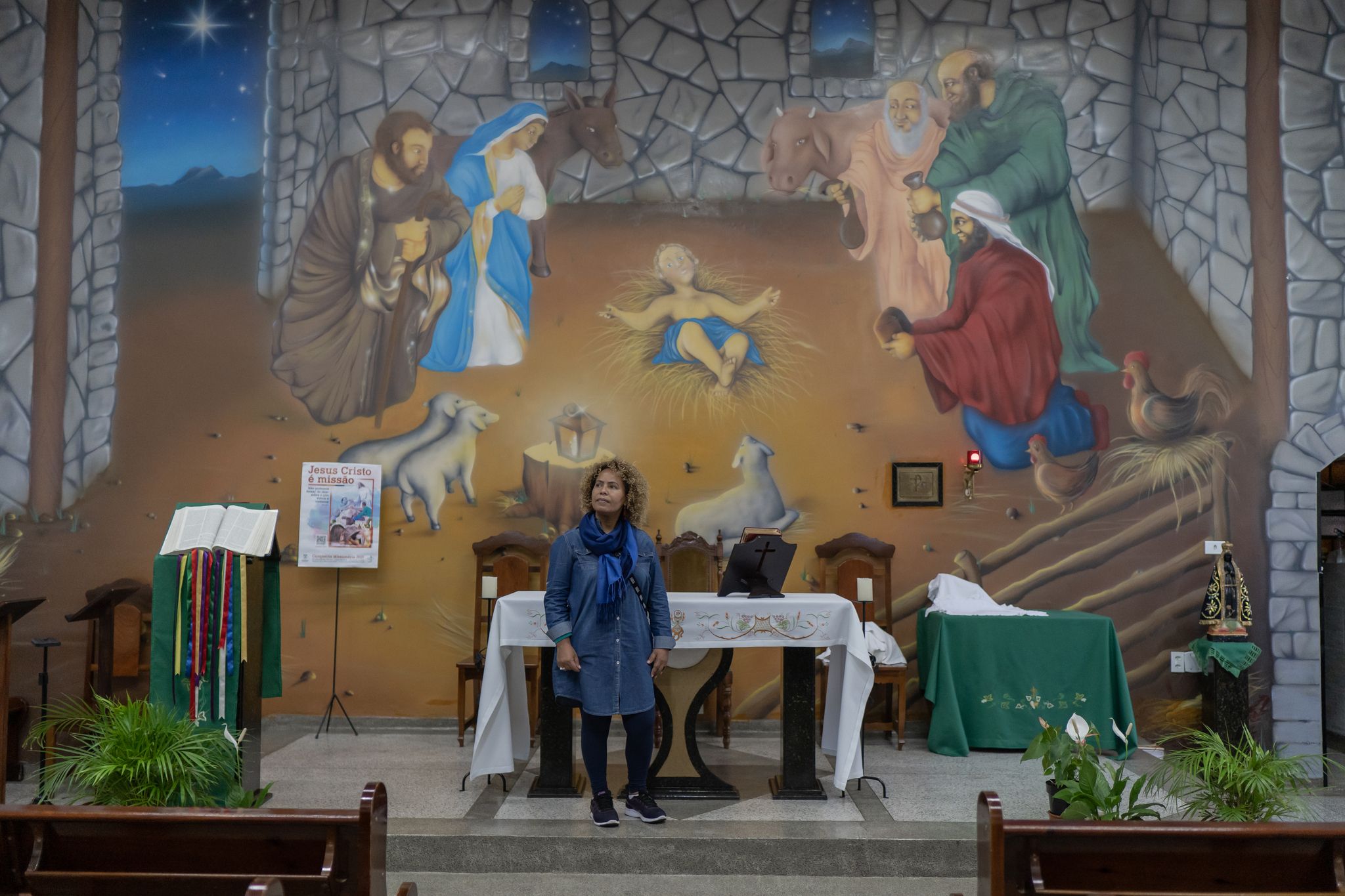 ► In Sao Paulo, an appeal to the “voiceless”

By videoconference, there are about thirty of them, always on time. The meeting is precious for these Brazilian Catholics very involved in the life of their parish, Sao Paulo Apostolo in the district of Sao Matheus. Thanks to these virtual exchanges, they manage to overcome the geographical limits of a megalopolis like Sao Paulo. The faithful from Brasilândia and Ipiranga, several tens of kilometers away, also virtually join them to reflect on the future of their Church.

→ REPORT. Synod on synodality: from France, Ivory Coast or Brazil, the Church rushes towards Rome 2023

From the grassroots community of Brasilândia, Serginho Silva, in his fifties, punctuates the meeting with a song on the guitar, as in real life. Before getting to the heart of the matter. “We are one of the countries in the world with the highest inequalities, the figures show. Our Church must therefore be with those who suffer, ”he pleads, supported by a collective nod of the head.

Until late at night, the small digital skylights convey the reality of the field. Women are the majority to work for the daily life of their Church. Vera Damasceno is just as charismatic on screen as she is on the pitch. Originally from Sao Matheus, this teacher has seen her neighborhood – a dormitory city – gradually welcome public transport and health facilities. But precariousness and unemployment persist.

She’s been a lifelong advocate for human rights and social justice, and even more so since President Bolsonaro froze part of teachers’ benefits. “My Church cannot be limited to the rosary and the sacristy”, she explains gently. The Synod is in her eyes an important occasion to recall that, like her, other female figures of the community make possible moments of fraternity within the Church. “The institution is addicted to power. Instead of freeing us, she oppresses us with her patriarchal vision, ”she denounces.

Women at the center of the Church

Discreet but warm, Liz Marques is a central figure in the basic ecclesial community (CEB). As the platter of pao de queijo (Brazilian gougères) comes out of the oven, she says: “It is here, in houses or garages, that members of the community have always come together. Besides, the land of her house formerly belonged to the CEB, of which she is a member. Liz animates this synodal meeting at least two days a week, managing to unite about fifty members, behind the computer, after a day of work. “Synodality means building together, and I devote myself to it as much as I can,” explains this human resources employee at Notre-Dame College.

→ EXPLANATION. What place for women in the Church?

The men of the community are the first to ask that women be at the center of their Church. “Are women going to continue to be spectators or become actresses endowed with true ecclesial citizenship? », Insists Peterson Prates. At 25, he provided part of the religious services in his neighborhood.

With two priests for seven parishes, Sao Matheus needs reinforcement; also the young man, who works with an elected leftist, also puts himself at the service of his parish. “My priority for this Synod is that the participation of the laity be democratized,” he sums up. Rome will have to answer us, at the end of this Synod, and change the structures. Not only to listen to us, but also to act. “

Listening to the voiceless at the heart of their mission

The population of the peripheries, mostly Afro-Brazilian, is not at the center of the Church either, but Peterson, with his Afro hairstyle and his calm voice, works there. For “Black Consciousness Month” – in November each year – he hosted celebrations with songs and dances from the African heritage, so prevalent in Brazil. In the opinion of all around the table, listening to LGBT populations, the homeless, the landless and the voiceless is at the heart of their mission.

► At Yvetot, a rich discussion on governance

On this misty autumn morning, the faithful rush, in clusters, into the chapel of the parish of Saint-Pierre d’Yvetot (Seine-Maritime). “It fills up well. A few minutes ago, there were not many people yet ”, smiles, somewhat relieved, Guillaume Houdan, one of the deacons officiating under this bell tower. About twenty of them responded, this Sunday, November 21, at the invitation of the parish priest, Father Benoît Bréant, and the local parish team, to participate in a meeting dedicated to the Synod.

A few weeks earlier, the collective decision was taken to focus on just one of the ten themes envisaged by the preparatory questionnaire sent by the Vatican in early September. “We chose ‘co-responsible in the mission”: this is what seemed closest to the concrete realities of our parish “, explains the priest from Yvetot, before opening the gathering with a brief prayer.

“The spirit of this process is really dialogue”, explains Jean-Marc Létondot, member of the diocesan pastoral council, responsible for representing the community at the level of the diocese of Rouen, to the microphone. In recent weeks, the faithful not available on that date – but who wished to share their opinions – met in committees of “at least three people” to reflect on several questions. “Can I define what the mission of the Church is in a few words? How am I currently participating? “And” How would I like to participate in decisions concerning the life of the parish? If I participate, what would I like to improve? », Listed the distributed document.

→ READ. Synod: the Pope calls on the Church to move away from “repetitive pastoral models”

“We have already received half a dozen responses, sent to the diocese,” notes Jean-Marc Létondot, before urging the participants to come together, in turn, in small groups. “I sing while hosting a funeral, that’s all I can do,” begins Elizabeth, retiree and member of the small central animation group. “Our big challenge is to reach deeply into people far from the Church, whether at funerals, weddings or baptisms”, adds Vincent, 37, head of the Scouts and Guides of France group. (SGDF) by Yvetot.

Parishioners from the back of the church

For nearly an hour and a half, the discussions take place at breakneck speed, reaffirming the need to “better integrate parishioners from the back of the church”, to bear witness “in simple words” to the message of the Gospel, by demonstrating also a presence “sometimes more discreet, at the bend, for example, of a coffee with a neighbor”, to dare to call more to take responsibility “according to the charisms of each one” …

The participants come to the thorny issue of governance, cited extensively by the report of the Independent Commission on Sexual Abuse in the Church (Ciase). “At our level, we may need to strengthen transparency in the choice of members of the parish team,” said Guillaume. “For decision-making, maybe some kind of management board could be set up? », Launches Dominique. “It could also help free our priests a bit,” confirms Marc. At the end of the session, Jean-Marc collects the forms, which he must now send back to the diocese.

► In Abidjan, politics are part of the debate

Tuesday, November 30, 7:30 p.m., in the Rivera Bonoumin district in Abidjan. About fifty people recite the prayer proposed by the bishops of Côte d’Ivoire for the Synod on Synodality. They are all members of the Theos group, an association of the faithful founded three years ago by Marie-Laure Abotcha-Boni, already founder of the first new Ivorian community (Mother of Divine Love) and member of the national team to oversee the consultations. in view of the synod.

→ TRIBUNE. After the Ciase, the stake of the Synod: “to let everyone speak”

This evening, Marie-Laure is responsible for explaining the Synod and its interest. She underlines the context, marked by the Covid-19 pandemic, the crisis of sexual abuse in the Church. “Synodality is the only possible way for the Church of the third millennium”, she explains, quoting Pope Francis. For her, it is essential that everyone’s voice be heard during this process. And that everyone feels concerned.

Among the participants, there are many expectations. Sitting in the front row, Blaise Gbotta Tayoro, takes careful notes. “Our wish is that our Church not only displays a folkloric religiosity, but that our faith is also manifested in depth to have a real impact in today’s world”, he intervenes. Maximin Digbeu, for his part, is concerned about the training of Catholics in the most isolated areas. “I would like us to be able to see how to offer a new catechesis that is more lively and adapted to our parents in the village, who are rarely literate. “

→ REPORT. Behind the scenes of the Synod in the Vatican, listening to “all Catholics”

Sitting just behind, Violaine Attoungbre insists on a point highlighted by the Pope on the eve of the consultations: “Clericalism is still very present in the Church and continues even after Vatican II,” she points out. The laity should truly occupy their place in the Church. But they are not really helped in this by the clergy. “

Claudine Amalaman is worried about the place of politics in the Church: “We are transposing our political divisions in the Church. This concerns lay people as much as priests and constitutes a real problem. “

Franck Morel Kouadio expresses another concern shared by many young people. “We dwell on our parish activities by asking for the participation of all: the Church will, for example, ask for contributions to build buildings. But it does not get involved in the concrete life of people, that of young people for example, by promoting a support network to enable them to have a job. “

At the end of October, the General Secretariat of the Synod of Bishops announced the extension of the diocesan phase, opened on October 17 and initially supposed to be closed in April, until August 15, 2022, to allow “to offer a greater opportunity to the people. of God to live an authentic experience of listening and dialogue ”.

Bishops’ conferences, Eastern Catholic Churches sui iuris and other ecclesial organizations will also have more time to send the summary of the consultations to Rome.

After that, the first Instrumentum laboris will be drawn up and sent to the particular Churches. – A continental phase will then begin, which will end in 2023.