Dressed in a blanket of snow and embraced by the Moskva River, the old GES-2 power station is drawn before the visitor who approaches its doors like a huge white cathedral; a temple devoted to modern art where its huge stained glass windows make out a space full of light, and its chimneys and its ancient clock tower rise towards the Moscow sky in a gothic semblance.

The facility, built in 1907 to feed the Moscow tram network, begins a new stage in its long history. Seized by the revolutionaries in February 1917 and then by the Bolsheviks in their struggle with the provisional government, years later it was the target of German bombs; and after surviving more than half a Soviet century and the harsh nineties, it ended up being a victim of technological progress, with its closure in 2006. However, businessman Leonid Mikelson (Kaspiisk, 65 years old), the fourth richest man in Russia, with a $ 24.9 billion (€ 22 billion) fortune, according to Forbes, has given space a second chance. 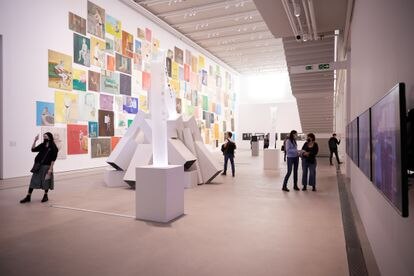 The VAC Foundation, created in 2009 by the CEO of the largest private gas company in the country and the Russian-Italian gallery owner Teresa Iarocci Mavica (Bonefro, 61 years old), took over the place in 2014 and commissioned the Italian Renzo Piano’s studio to convert it into a space to promote contemporary culture, a decision that had the guarantee of the successful retrofitting made by the architect of the Lingotto factory in Turin in 2003.

“The project has been based on two concepts: the first, to build a space where visitors feel guided by their own intuition. Thus, when they reach the lobby, they just have to change their gaze from left to right to understand what is inside and how to move around, they do not need a map to visit it. The second is the circulation network, a single piece conceived as a kind of spatial sculpture composed of stairs, elevators, corridors and platforms that connect all the spaces and activities together, ”says the architecture studio. And this goal has been more than achieved. The route is very intuitive despite the few indications shown and the visitor receives a certain sensation of reward by freely exploring the place, without getting lost at any time. The Ges-2 House of Culture, inaugurated on December 4, is headed by Teresa Iarocci Mavica herself, who has also been curator of the collections of the Russian bank Gazprombank and a member of the acquisitions commission of the Tate in Europe of the this. His inspiration for this project has been the Russian “houses of culture” that flourished at the end of the 19th century at the hands of the most powerful figures to educate (and influence) the illiterate people.

“Its main objective was to encourage people to participate in culture and make art an integral part of their daily experience,” recalls the foundation, which now claims to aspire to promote modern art among its fellow citizens as does another exhibition hall. rival, the Garage of the billionaire Román Abramóvich. A patronage that, in addition to increasing the dignity of its sponsors, is promoting a cultural flourish in the heart of Moscow. There, both spaces are separated by just a few hundred meters and GES-2, located on the island of Bolotni, is also surrounded by other cultural initiatives, such as the old Red October chocolate factory and the Strelka Institute for Design, Media and architecture.

Entrance to the new center is free, although due to pandemic restrictions it is necessary to reserve a ticket in advance, and all facilities are offered to visitors, who can bring their own food or baby carriages around the enclosure. “Although traditional museums were designed to display works of art and inform visitors about their historical value, GES-2 sees the public as its ally in the process of cultural production,” adds the foundation, which emphasizes that the objective ” it is to be a house of culture for everyone, a place where people want to spend their time and want to return ”. “This houses [de la cultura] they became the first example of multidisciplinary institutions. They housed under one roof a library, a gallery, a theater, a creative workshop, a concert hall, a museum, a cinema or even a school ”, he recalls. 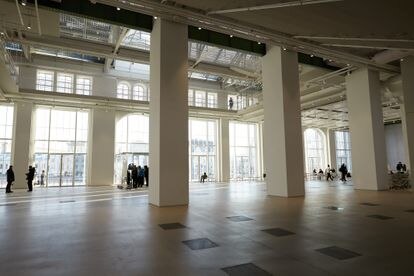 With these wickers, Renzo Piano’s studio articulated the new 20,000-square-meter space to offer “a social and cultural experience that revolves not only around visual and performing arts, but also science and sustainability”. Thus, the facilities have, among other areas, several spaces for exhibitions, workshops and reading areas, all of them bathed in the large amount of light that enters through its huge windows. In addition, the architecture firm boasts the four new chimneys that replace the old brick ones, an ecological design to ventilate the old power plant with air taken from more than 70 meters high.

Unlike other museums, the VAC foundation has proposed a project that is articulated in seasonal programs to keep alive the artistic pulse of the city. The first one stars the Icelandic artist Ragnar Kjartansson (45 years old), who in addition to exhibiting some of his works is the promoter of an experiment: recording the soap opera again and before the public Santa Barbara, a “living sculpture” that is being improvised in front of visitors for a hundred days.

This American soap opera “was for Russia something more than a television series”, highlights the organization. The first episode aired on January 2, 1992, days after the fall of the Soviet Union, and succeeded in the collapse of the Russians “disconnecting and their minds were on the rich and beautiful world of California.” “When someone had a hard time, they would ask ‘do you have a Santa Barbara? ‘, and many Russians began to learn English through the series ”, recalls the foundation, which explains that the artist seeks with this work to propose what role the past plays in the present if it is recreated again. 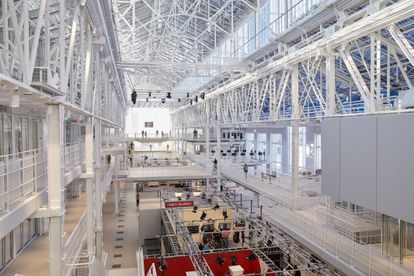 In fact, Kjartansson does not give the visitor respite since he leaves his coat in the closet. Before reaching the recording area of Santa Barbara, intuition leads to a first door with which you can access two-minute recordings that recreate the painting by Ilya Repin Ivan the Terrible in two different years, 1913 and 2018. Suddenly, the actors who play the vandals who tried to destroy the painting in those years burst into the videos, and they jump on the play. “This Russian work and its ability to unleash uncontrollable emotions proves the importance of Kjartansson’s research on the power of art on the human soul,” explains the organization.

Later, more rooms receive the visitor with very varied proposals and without any hint of censorship. In a corridor is Eye Body: 36 Transformative Actions (1963), the work of the artists Erró, Icelandic, and Carolee Schneemann, a feminist artist who in the sixties, through her nudes, “subverted the representation of the female body as a silent object of man’s desire and embodied the active role of creative ”. Later several screens show Me and my mother, Kjartansson himself, who since 2000 has recorded every five years his mother, the actress Gudrún Ásmundsdóttir, spitting at him in anger. According to its author, the work aims to delve into “interpretation techniques where humor and confrontation are emotional vehicles”.

And beyond the provocation, other pieces reflect melancholy, such as To Moscow!by Kjartansson and Ingibjörg Sigurjónsdóttir; or humor, with some of the less popular pieces of the Monty Python, produced in collaboration with the British Embassy.