Does Valérie Pécresse use the slogan of the National Front in 1986?

“The courage to speak up and the will to do. This is a slogan that is debated on social networks. It is with this formula that Valérie Pécresse, recently invested as the Republican candidate for the presidential election of 2022, decided to lead her campaign. A slogan she had
used during the nomination campaign and that she resumed on Saturday for her first major candidate speech in Paris.

Nothing shocking, a priori. Except that some Internet users noted that these terms had already been used … by the National Front. The proof: a campaign poster calling for a vote on March 16, 1986. 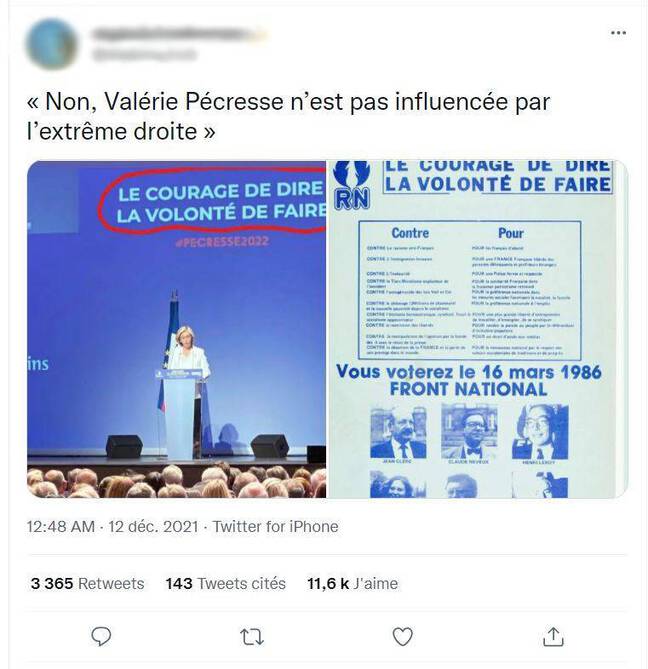 Some denounce a montage: “On the right poster we can read 1986. Yet I have the impression that at that time the name of the party was indeed FN and not RN as indicated by the logo on the left. There is a good chance that this poster is fake. While others do not seem surprised at such proximity between Valérie Pécresse and the former party of Jean-Marie Le Pen.

20 Minutes unraveled the true from the false.

A nod to the RN or simple coincidence, Valérie Pécresse’s campaign slogan was indeed used by the far right about thirty years ago. By searching for an image on the Internet, it is possible to exclude the thesis from the rigging: the poster posted on social networks is visible online on the documentary portal of the Musée de Bretagne. It is about a campaign leaflet for the list of the National Front in Ille-et-Vilaine for the legislative elections of 1986.

To classify this information as false news, Internet users highlight the fact that the “RN”, as the poster indicates, did not exist in 1986. It was only in 2018 that the National Front was renamed “National rally” under the leadership of Marine Le Pen. A first name change since the creation of the party in 1972.

However, the name “National Rally” did indeed constitute the party’s banner for the legislative and regional elections of 1986. Several other leaflets and
posters as shown by. On March 16, thanks to the proportional system, no less than 35 deputies entered the National Assembly, where they joined a group chaired by Jean-Marie Le Pen and called… “National Front-National Rally”.

As the journalist Vincent Glad noted, the formula was then taken up by other candidates of the National Front, for example for the 2015 departmental elections.

“The courage to say, the will to do”. Valérie Pécresse’s slogan has long been used by the Front National. pic.twitter.com/fxGqK539Ww

“The courage to say and the will to do” is inspired by a quote attributed to George Clemenceau, who would have written: “You must first know what you want, then you must have the courage to say it, then you need the energy to do it. »A formula often used later, for example by the General Union of National Education CFDT at the end of the 1970s during a campaign to defend school staff and professionals.