‘A vacuum cleaner from heaven’: how could it go so wrong in Mayfield 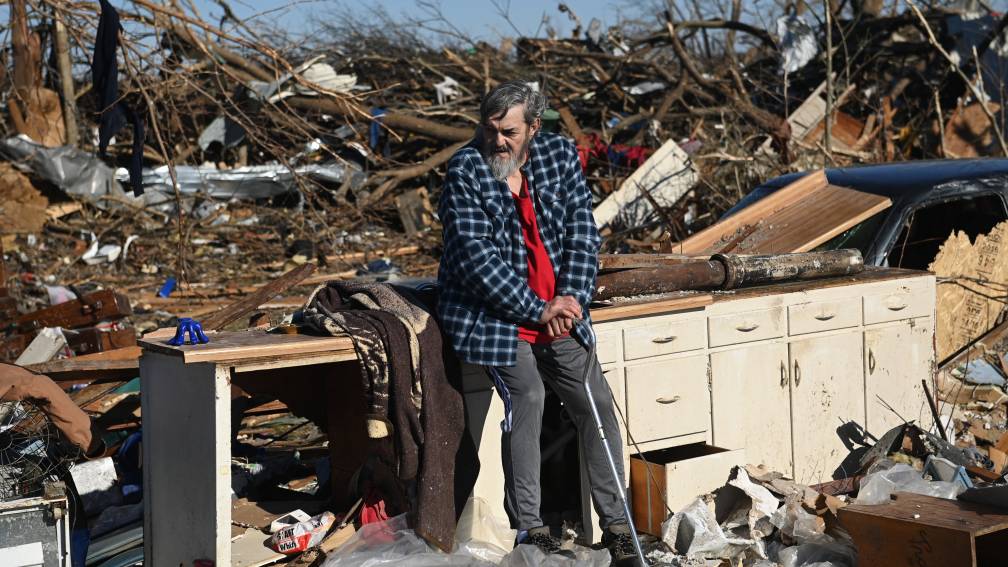 A bleak silence was encountered by correspondent Lucas Waagmeester in Mayfield this weekend. Most residents here were made homeless by this weekend’s tornado and have sought shelter elsewhere because of the cold. “People who come to have a look are in shock.”

“Dozens of miles before Mayfield, there is already debris everywhere: pieces of roofs, wheelie bins, houses that have crashed into the road. In the strip that was directly hit, it seems as if a vacuum cleaner has come down from the sky and everything in a strip of 2 miles wide. Mayfield is really completely destroyed.”

The death toll from the tornado is approaching 100, an unusually high number. Waagmeester: “This part of America is somewhat used to, but devastation in such a vast area is not often seen. The devastation is really total.”

Drone images from the area show the damage:

Meteorologists are short of words to describe how exceptional the situation is. Tornadoes are rare in December, especially of this magnitude. The weather service takes seriously into account that the tornado was one of the highest category, EF5. That’s a rarity among the 1,200 twisters that the US experiences annually: the last was in 2013.

In addition, this tornado lasted exceptionally long: where natural disasters usually subsided after a few minutes, this trunk lasted for hours over a distance of more than 300 kilometers, through four states. This ‘Quad State Tornado’ may have broken the record set by the ‘Tri State Tornado’ in 1925.

“You have to imagine that everything in a strip of about a kilometer wide has been completely destroyed over that entire length”, NOS weather forecaster Peter Kuipers Munneke outlines. “Radar analyzes show that debris and debris have been swirled up to a height of 10 kilometers. That is unprecedented.”

Kuipers Munneke explains that the coincidence of three weather patterns over Kentucky caused the fatal weather. “Very warm air from the Gulf of Mexico collided here with cold air from the Rockies and Canada. Because the jet stream was directly above the colliding air types, the air was sucked up even harder.”

The fact that these conditions now occurred in the winter – while the tornado season lasts from April to June – is partly due to La Niña’s invigorating effect. Due to this erratic weather effect, the weather in the south of the US is unusually mild at the moment.

In addition, warns the director of the American disaster service FEMA, the chance of this type of extreme weather is increasing due to climate change. “This is going to be the new normal,” Deanne Criswell told CNN. “The impacts of climate change are our generation’s crisis.”

Local meteorologists warned local residents to take refuge in the run-up to the severe weather, sometimes with hours-long weather updates via the media. Not everyone succeeded in that yet: many of the employees of the collapsed candle factory decided to take refuge there. People were still working late at night because the Christmas period is the busiest time for the candle maker. Eight employees were killed, eight others are still missing.

Moreover, with tornadoes it is not always clear where the best shelter is: the trunk moves treacherously unpredictably. Kuipers Munneke: “If you look at the images, you see neighborhoods that have been wiped out while a few hundred meters away the trees are still standing.”

In Mayfield correspondent Waagmeester saw that the inhabitants are now mainly concerned with practical matters. First responders arrived to clear broken trees from the road and to remove fallen power wires.

“They are clearing rubble on a small scale, to make the streets passable for the large equipment. But a lot still needs to be done after that: the largest part of the town has to be completely rebuilt: schools, shops, facilities.”

“They are still at the very beginning of a process that will take months or years.”

A small bright spot for one resident: Waagmeester spotted her dog between the ruins: