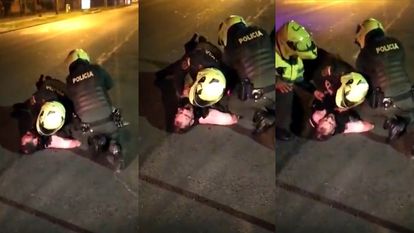 Two police officers reduce the lawyer Javier Ordóñez in the Santa Cecilia neighborhood, in the town of Engativá, in western Bogotá (Colombia).

“It cannot be called otherwise.” The independent clarification report supported by the United Nations System on what happened in Bogotá on September 9 and 10, 2020 has said with all the letters that what the city experienced those two days when citizen protests were unleashed by the murder of the lawyer Javier Ordóñez during an operation by agents was a police massacre. “The national police reacted in a disproportionate, illegal way and apart from the principle of humanity in the attention of the citizen demonstrations in Bogotá and Soacha. His actions caused a massacre that killed 11 young people, ”said Carlos Negret, a former ombudsman and coordinator of the investigation.

The investigation – requested by the mayor of Bogotá, Claudia López – determined that the massacre occurred due to the “absence of a political and operational order not to use firearms against the protesters.” In other words, there was a lack of greater “political and operational” leadership from both the Iván Duque and López governments to prevent it from happening. The mayor referred to the report as “painful to the soul.” With a choked voice and through tears, López offered an apology to the families and friends of the murdered youths. “I offer my forgiveness as a citizen and mayor for not having been able to prevent such a tragedy from occurring. We are all wrong, “he said this Monday.

The ‘9S clarification office’ also warns that, given the lack of progress in the investigations, it is not possible to guarantee that it will not be repeated. “15 months after the occurrence of the events, the progress is residual and although it is not possible to assert that they are in impunity, they will go there if urgent measures are not adopted,” the report concludes.

The investigators documented 14 murders in the context of the protests, including that of Ordóñez, of which 11 were at the hands of police officers, in what they considered “one of the most serious episodes of human rights violations in the history of the city ”. The report also warns that two other killings occurred by people in civilian clothes who fired at protesters.

But the massacre could have been greater. The investigation also documented that 75 people were injured by firearms, 187 by sharp weapons, as well as the injuries to 216 police officers. In total, the document says, seven violent practices were found in the context of the demonstrations: illicit use of force, violence against the public force, arbitrary detentions, gender-based violence, stigmatization of social protest, violence against public property and private and impunity.

Juliette de Riveros, Representative of the United Nations (UN) High Commissioner for Human Rights, said that the objective of the report “is not to discredit the police, nor to tarnish their image, on the contrary, the objective is to restore trust, using the truth ”. “There is a situation of serious mistrust in the institutions and in the Police,” said Riveros but said that it is necessary to carry out quick and credible investigations, unequivocal sanctions against those who abused, recognizing the truth and the victims and making necessary doctrinal adjustments to the Police .