Three seats in front of the bench: new installment of the chronicles of Emmanuel Carrère since the trial for the attacks in Paris 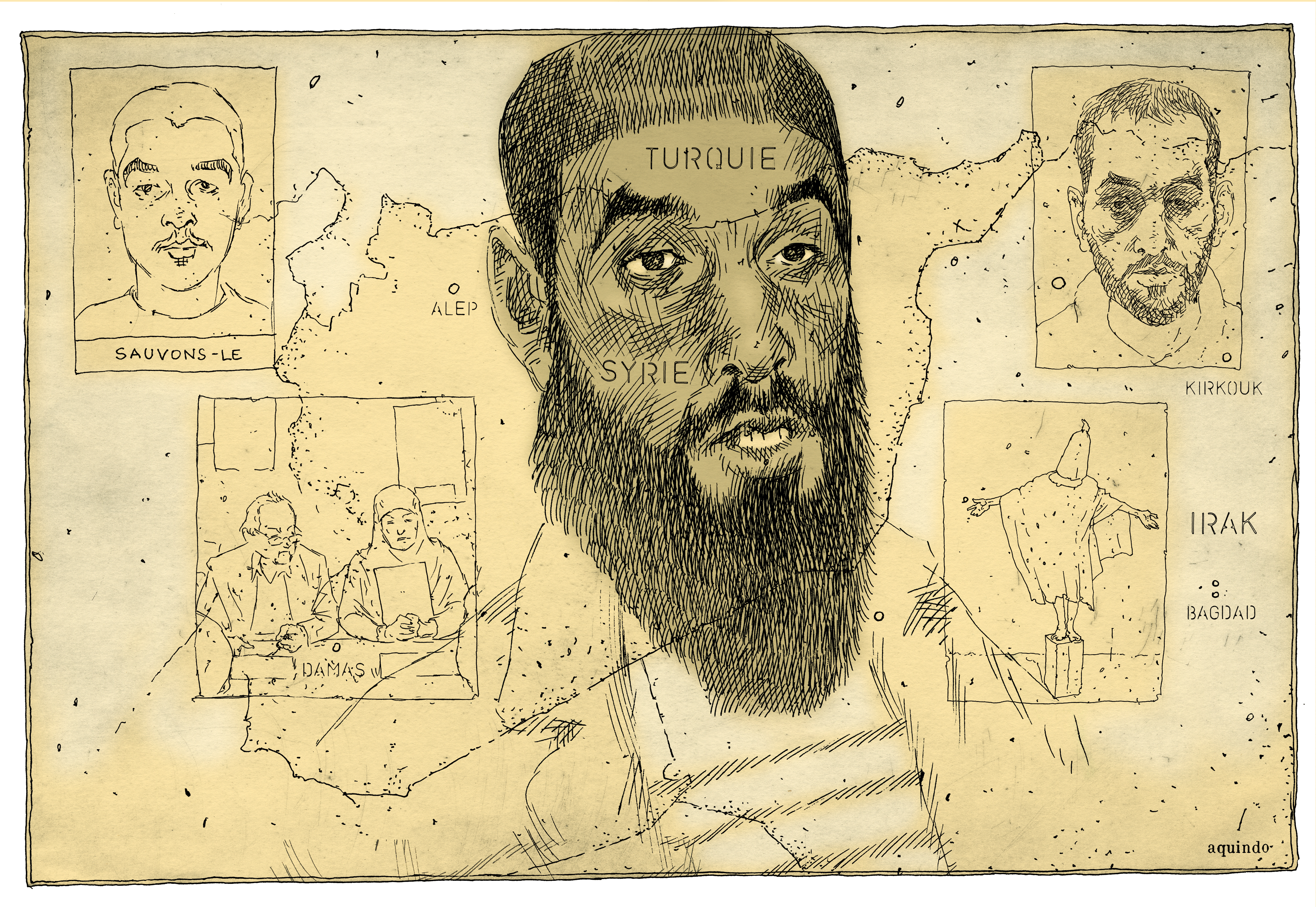 It is always night when Abdellah Chouaa leaves the courthouse. Since he is in Paris he plans to go to see the Champs-Elysées, but he is far away, he does not dare, he is afraid of getting lost or of being recognized, and for the moment he limits himself to this one route: line 14 to Saint-Ouen, the 13 to Basilique-de-Saint-Denis and then the 53 bus to get home. His house is a shed behind the chalet of an elderly lady whose living room he is forced to walk through. Ten square meters, 600 euros per month. Alone, without relatives, without payroll and with difficulties difficult to confess, he would not have found anything like that without the help of his lawyer, and it can be said that at least in this sense he is lucky. But he has to pay another rent of 700 euros in Belgium, to which must be added the gasoline to come and go every weekend, and also the food even if he does the shopping in Belgium, where it is cheaper, and the expenses of a family With three children. His mother and sisters help him a little, each one gives him 50 euros a month, but that will not last indefinitely.

Before he had a real job, he supplied the blocks of ice that are put in the hold of the planes at the airport, today he mis-sells clothes of dubious origin on Sundays in the markets. In black, he has confessed in court that he has not had the courage to reproach him. The day we talk, he has just sold his car: 3,700 euros with which he will have to make ends meet until the end of the trial in May. Assuming, of course, that at the end of the trial they do not imprison him again: it would be such a catastrophe that he prefers not to think about it.

Like Hamza Attou and Ali Oulkadi, Abdellah Chouaa appears on Friday the 13th under judicial control, charged but not arrested and obliged to be present at all hearings. Day after day, these three thirty-something neighbors of Molenbeek, who practice very petty crime and persecuted above all for bad luck, sit in front of the glass bench where the fourteen “real” defendants are. He, Abdellah Chouaa, never turns to look at them or speak to them. He does not want to have anything to do with them, and even less with his former friend Mohamed Abrini, a thick piece of the summary, because of whom he is here.

Abdellah Chouaa had the misfortune to transport him by car to Zaventem Brussels airport on June 23, 2015, and then to pick him up in Paris on July 16. In that interval, he received frequent phone calls from him from exotic numbers in Laos, Bhutan, Guinea, Russia, in fact from call centers in Syria. During the investigation he has sworn that he did not know that Abrini was traveling to Syria, that he believed that he was on vacation in Turkey. But Abrini, instead of minimizing his participation, as he could have easily done, has not stopped highlighting it: How could Chouaa ignore the reason for that trip and its radicalization, notorious throughout Molenbeek? I do not want to comment on the merits, but the fact that Chouaa and the other two have been released after a few months in detention means that their misdeeds are not that serious. They are enough, however, for them to appear on Friday the 13th and for their lives to have turned into a nightmare.

Abdellah Chouaa tells her eldest ten-year-old son that he only comes home on weekends because he has found a secure job in Paris, but he continually fears that a schoolmate will see his photo in the newspaper and release the little one. , in front of everyone: “So your father is a terrorist?” Maybe he should do like Ali Oulkadi, who has gathered the courage to explain to his first-born daughter, also ten years old, that some gentlemen have done great foolish things and that Dad knows one of them and that is why he has serious problems.

Ali Oulkadi is the man of the last kilometer, the one who on the morning of November 14, 2015 took Salah Abdeslam from one place to another in Brussels, whom Hamza Attou (along with the third in dispute, Mohamed Amri) had transported from Paris overnight. Nobody really suspects that they are terrorists, but it is undeniable that they have helped one of them escape, out of friendship. Hamza Attou and Ali Oulkadi frequented the famous Les Béguines café in Molenbeek, owned by Brahim Abdeslam. They spent most of their time smoking weed, and occasionally selling it, and Abdellah Chouaa, though like them has a modest criminal record, insists on discreetly distancing himself from his two companions in misfortune. While all the defendants cultivate the same outfit of tracksuit and sneakers, he wears a light-colored suit, too light for the season, and under the white shirt a turtleneck sweater, also white: the appearance of a Respectable employee, not the mobster.

Every day the three meet at 11:30 in front of the courthouse, where they enter escorted by gendarmes and followed by curious looks that frighten them. Ali Oulkadi does not have the luck of a fixed roof, like Abdellah Chouaa. He goes from one Formule 1 hotel to another, according to promotional offers, and sometimes, when he can’t take it anymore, Abdellah Chouaa puts him up in his shed. They reheat a plate of pasta, Abdellah takes the insulin injection, because he is diabetic, and then the two of them lie in bed and tell each other the life they dream of when all this is over: a house, a more or less permanent job , watch their children grow, the joints only on the weekend. I know less about Hamza Attou, the only one of the three who has refused to speak to me, not out of suspicion, I think, but rather because he suffered from one of those terrible depressive fits that all three take turns.

Right now the trial is going through a boring stage: maybe that’s why, because I was tired of looking at the Power Point commented in voice and off By Belgian researchers, I wanted to know more about these three men lost on the brink of a history that surpasses them. Boring for us, these moments are a truce for them, after five weeks of testimonies from the civil parties. Three hundred and fifty victims or relatives of the victims, a tsunami of horror and suffering. Almost every day, a mourning father or mother would go to the dock and reprimand them, putting them all in the same bag, as if they, Abdellah Chouaa, Ali Oulkadi and Hamza Attou, had machine-gunned their men with Kalachnikovs. children. You had to suppress the urge to get up and shout: “But I’m not with them! I have not done anything!”

The other day, Ali Oulkadi and I took advantage of a hearing suspension to speak sitting on a bench in the hall of the courthouse. He explained to me that to endure it helps him to follow the discussions and take notes as detailed as possible in a notebook. A lady approached us to tell me that she read and appreciated my stories. Civil party, he wanted to know if I remembered his testimony. No, unfortunately, it must have coincided with one of my rare days of absence. Hoping to refresh my memory, he said, “I came to the stand with my two grandchildren.” Then Ali Oulkadi interjected: “Nino and Marius.” I don’t know if the lady recognized him or not, but in any case she smiled at him and confirmed it: “Yes: Nino and Marius.” As she walked away, a glow of pure joy lit up Ali’s face because someone had spoken to her normally, and she quietly repeated “Nino and Marius”, as if the names of those little ones whose father was killed in the Bataclan were those of his own children and as if they gave him fleetingly, perhaps by mistake, but it was already something, the right to cry for them like everyone else.