Tapatío restores the mural of the Guadalupana in La Villita

The street artist Héctor González, of Guadalajara origin, had not thought so much about the huge mural of the Virgin of Guadalupe that he painted 18 years ago in La Villita until six months ago a friend shared a post on Facebook where his background work appeared.

González, known by the artistic pseudonym “Disrokone,” is one of the most experienced Latino urban artists in the American Midwest. When he saw that photo he felt something special. Those were long days when he only thought about how faded his mural was.

Héctor grew up in La Villita (Chicago’s most Mexican neighborhood) and originally painted that mural (which is next to the “La Chiquita” supermarket at 2367 Pulaski Avenue) after a very painful moment in his life. Today, thanks to the funds of many organizations, he is restoring the mural that will be reopened for the celebration of the Virgin of Guadalupe today, Sunday, December 12.

The artist finally decided to revitalize the piece after reflecting on how the Mexican community struggled to survive during the pandemic. He still remembers Calle 26, the heart of La Villita, as one of those places where there were many shops, and when the newspapers raved about the second most important commercial corridor in the city. He was very saddened to see many small businesses closing due to the COVID-19 crisis.

One morning in September he parked his truck in front of his mural and was finally convinced that he had to restore it. The state of deterioration of that work was a representation of how the Mexican neighborhood is almost two years after the pandemic: it lost color and the charm of its best years.

Art “made in” Guadalajara

Héctor came to La Villita when he was a 6-year-old boy. He started drawing and sketching from a young age, inspired by the graffiti movement in the 80s. On trips to his native Guadalajara, his uncles took him to see murals and lots of street art, which was always his passion. In the 1990s, he and his team painted nearly 30 murals throughout Chicago, becoming a legend in urban fine arts. Today he works as a designer in a metal structure factory and sells his art sporadically in galleries.

The images of the Virgin of Guadalupe always inspired him. But this mural grew out of a promise Hector made during one of the saddest times of his life..

His girlfriend was diagnosed with cancer in 2000. Doctors in Chicago told him there were no other options besides palliative care, so the couple sought alternative treatments in Germany. In the last days of his life, she asked him to get her a cold Coca-Cola. Héctor went out to look for one, but he was in a German town without really knowing where to go. He saw a small church and entered to pray in front of the image of the Virgin Mary, which reminded him of his home. He wept and prayed alone, for almost an hour, in complete silence.

Héctor was trying to negotiate with the Virgin Mary at the time: “Please help me and I will help you in some way … I don’t even know how, but I will do something to bring people closer to you and remember that you are there and that you are always taking care of us”, Today he remembers what he said to the Virgin.

His girlfriend passed away two days later. He left in peace, without pain. And he felt he had to keep his promise. 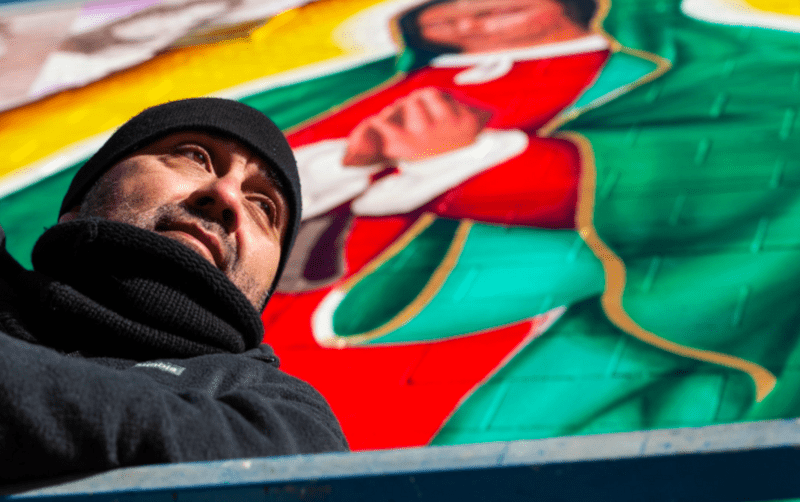 Héctor came to La Villita as a 6-year-old boy, in the 90’s, he and his team painted almost 30 murals throughout Chicago. SPECIAL

Héctor came up with the idea of ​​painting an image of the Virgin of Guadalupe in the “La Chiquita” supermarket, where years before he had painted a mural inside the restaurant that is in that famous store. The owner, Alfredo Linares, gave his blessing to make the piece.

He didn’t even sign his work. I didn’t want credit for that. It was like her gift to the community, a promise she kept and a way to tell her story.

It took Héctor four months to finish the mural because he was grieving. The mural also includes images of his late girlfriend; his mother; his sister Norma; and a Chicago cancer patient who also died the same day as his girlfriend. Héctor painted himself in the lower left corner of the work, praying to the Virgin Mary.

Mariachis to the Virgin

González applied for grants from the city to help support the restoration of the mural through a young artist support program that he sponsors. The restoration changed the sepia tones of the original with more vibrant colors and added more color portraits that represent the continuation of life. This time the work will have the signature of “Disrokone”.

The mural of Our Lady of Guadalupe in La Villita has always had a special resonance in the community, as the majority of Mexicans under the age of 50 grew up looking at it on the walls of the neighborhood. The neighborhood wouldn’t feel good without that 26 and Pulaski mural, since Her image is a symbol of the maternal strength with which the community relates, as well as being the strongest symbol of the cultural identity of the majority of its residents.

To commemorate the reopening of the mural and the celebration of the Virgin of Guadalupe, La Chiquita supermarket will bring a mariachi band to sing to the Virgin Mary. A priest will bless the mural, just as it happened 18 years ago.

Hector just wants people to look at the new design for inspiration to “feel good and excited” about their neighborhood.