David Beckham, best man at his father’s wedding, who has married a millionaire lawyer

David Beckham, 46, has lived on the crest of the wave of fame for decades, but his personal and family life – notably his long marriage, of more than two decades, to former singer and designer Victoria Bechkam – does not it has always been idyllic. In 2002, when he was already captain of the England soccer team and star of Manchester United (in a few months he would be signed by Real Madrid, becoming one of the highest paid athletes in the world), he suffered a hard blow with the separation of his parents, Ted and Sandra. After being married for 32 years, the couple decided to go their separate ways; Among the reasons, as Ted explained in his later biography, were how difficult it had been for the hairdresser and the gas fitter to deal with the meteoric fame of their offspring.

However, after that the two ended up rebuilding their lives, also in love. 18 years after that breakup, 73-year-old Ted Beckham announced in March 2020 that he was engaged. And a year and a half and a pandemic later, the wedding has finally taken place. In the celebration, the roles have been reversed and it has been the former athlete and now businessman who has acted as godfather to his own father.

The famous son of the groom has posed for some family photos accompanied by his father, his new stepmother, Hilary Meredith, and the daughter of the bride, Charlotte, who attended as bridesmaids. In addition, the family was accompanied by the rest of the members and some close friends. With David were Victoria and three of his children: Romeo (who took his girlfriend, Mia Regan with him), Cruz and Harper (who also acted as maid of honor at the ceremony), according to the British press, which affirms that the best man also would have given a speech. Only Brooklyn, the oldest of all, would have been missing.

The couple has released a statement in which they have confirmed that they were married “on Saturday in a small private ceremony in London, surrounded by their closest family, including Ted’s three children. [David y sus hermanas Lynne y Joanne] and eight of his grandchildren, Hilary’s mother and daughter Charlotte ”. “Ted’s godfather,” the writing continues, “was his son, David. Bridesmaids Charlotte, Francesca, and Harper were beaming in blue velvet gowns. The couple has gone on their honeymoon abroad ”. 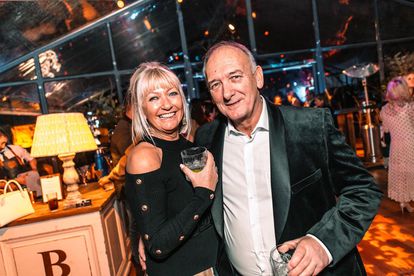 David Beckham’s father, Ted Beckham, and attorney Hilary Meredith, in the photo with which they announced their engagement, in March 2020 Twentyfour7 PR (PA / Cordon Press)

David Beckham’s new stepmother is a 64-year-old lawyer and teacher who has also had a previous marriage. She met Ted Beckham in 2019 when, according to the British tabloid version Daily MailThey both worked as volunteers at a veteran’s center. Hilary, well known activist and lobbyistShe has worked frequently for members of the military as well as veterans and since 2003 has had a law firm under her own name, called Hilary Meredith Solicitors. In fact, in the mid-eighties he sued the British Defense Minister, something that had never been done before, as the legal representative of the widow of a soldier who died in combat.

In addition, Hilary Meredith (now Beckham) teaches law as a visiting professor at the British University of Chester, where she is an expert on matters concerning the Army and its members, especially retirees, and has served on parliamentary committees. According to your firm’s website, has achieved compensation for more than 60 million pounds (more than 70 million euros) for her clients, which places her in the British press as a powerful but also millionaire lawyer.

The relationship between David and Ted Beckham has not always been so idyllic. In 2005 the sports star’s father published an unauthorized biography called David Beckham: My Son, (David Beckham: My son) where he shredded his private life and also that of the athlete. That was a personal betrayal for David, and it made the soccer player angry with his father and they spent some time apart and without maintaining any relationship. Something that was solved in 2007. In September of that year Ted Beckham suffered the first of two heart attacks that worried his son (in fact, he lived in Los Angeles at the time and quickly flew to London) and that made him approach him , so since then the relationship has improved and got back on track. So much so that now he has become her best man.