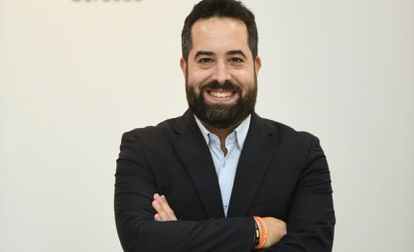 The decision of the Citizens’ Guarantees Committee to provisionally exclude from the primaries to elect the party’s candidate for the Junta in Andalusia, the regional deputy Fran Carrillo – the only one of the eleven candidates with any possibility of overshadowing the current leader, Juan Marín- it has clouded, even more if possible, this internal process, convened in the middle of a festive bridge and with just two days to present candidacies. Carrillo was removed from the primaries, which will be resolved between next Monday and Tuesday, for owing the party about 4,000 euros corresponding to the percentage of his salary as a public position that he must cede to the organization, according to sources from the address. The parliamentarian assured this Friday that he had deposited this amount before a notary after receiving the party’s notice, but the Guarantee Committee informed him on Friday night that it does not accept such a deposit and that it extends the deadline to pay until 10.30 a.m. this Saturday – in the account number and with the exact amount that had been previously provided to him – according to other party sources.

The organization of Cs opened the term of presentation of candidacies this Wednesday at nine in the morning and closed it this Thursday at nine at night. Of the 11 people who showed up, nine were admitted, including Marín or the critic Carmen Almagro. According to sources from the national leadership, Carrillo was provisionally excluded from the official candidates because he was not aware of his financial obligations with the party, a condition for being able to attend. The other affiliate whose candidacy was suspended, José Antonio Pérez, has finally entered the list by correcting his incompatibility, which has nothing to do with a default.

The Citizens’ statutes, in article 106.2.e, establish the obligation of public and institutional positions to assign around 8% of their salary to the party. Carrillo allegedly had not delivered this amount since he left the senator’s seat in June 2020. A person in charge of the formation called Carrillo on the night of this Thursday after closing the act of candidacies and announced that he had 24 hours to contact him. day in this payment and to be able to present themselves thus together with the rest of admitted.

Within the list of applicants, only Marín and Carrillo hold public office. Carrillo alleged this Friday that when he was replaced in the upper house by Fran Hervías, former secretary of Cs Organization and now advisor to the PP, and returned to the Andalusian Parliament, he agreed with the party that he would stop giving up a percentage of his salary as an autonomous deputy and you would only have to pay the membership fees (10 euros per month). According to his version, this agreement was reached with the party leaders Carlos Cuadrado and José María Espejo-Saavedra. However, management sources deny that they reached that agreement. “You can not agree to something against what the statutes stipulate,” says a senior position from Cs. And this is how Marín pronounced himself this Friday at a ceremony in Almería: “All elected officials must pay a part of that income every month.”

Carrillo has accused the national leadership of Cs of “boycotting” his aspirations and, on the contrary, uplifting Marín, using the debt argument. Despite initial reluctance and having accused the national leadership of “blackmail” and “extortion”, Carrillo announced this Friday that he had deposited before a notary – and not the party, as a sign of his disagreement – the 4,000 euros and appealed the resolution of the Guarantees Committee that provisionally excluded it. The deputy affirmed that, in the call he received, he was not informed of the exact amount of the debt and that he had entered 4,000 euros because that was the amount that had been leaked to the media this Thursday. However, sources from the top leadership deny Carrillo and affirm that the exact amount was communicated to him both by phone, this Thursday, and by email. “How were we going to give him 24 hours so that he could pay without telling him how much the debt was?” Asks a Cs leader. The deputy later acknowledged, on the afternoon of this Friday, that he had received an email, but that it arrived after having deposited the money before a notary public and notifying the party. At the end of this Friday, the Guarantee Committee informed him that it did not accept the deposit before a notary public and that it extended the term to make it clear that “there is no discrimination.”

With the media attention and social networks engulfed in Carrillo’s bickering, the other candidates are trying to optimize their scarce resources and the lack of support from the party itself to set up a lightning campaign, called almost on the sly, that It started this Friday. Elena Bago, from Huelva, has experience because she appeared in the primaries in 2018 and almost surprised Marín by obtaining 23% of the votes. “I denounced that the times were minimal, but then nobody complained because they were in favor of the organic and there was no crisis; now that there is, a lot of critics come out ”, he ironizes. Bago has begun to contact affiliates as it did three years ago, via WhatsApp and through contacts. The campaign ends this Sunday night, and the telematic voting begins on Monday at eight in the morning. Some 2,600 affiliates, 1,300 less than in 2018, have the right to vote.

It is the same route that Carmen Almagro, the Renovadores candidate, will use a critical current: “The management does not cover or publicize our events, it only provides us with the venues. So we are going to have to throw away a lot of the phone. This situation with such short primaries only generates noise, frustration and disenchantment among the affiliates ”. Bago repeats in the primaries because, like other candidates, he is unhappy with Marín’s leadership. And he adds, referring to the vice president and Carrillo: “I think both are the same, the war is to see who makes the merger with the PP. What happens is that Marín does it through the Andalusian route through Elías Bendodo and Carrillo through Genoa ”. This industrial engineer attended this Friday with amazement the spectacle of her rival’s last minute payments. “It hurts because he is hiding us from others.” The candidate gives voice to what is a murmur among the militants: how much power Fran Hervías maintains in Andalusia to mobilize the vote of punishment against Marín in Andalusia.

And while the anonymous candidates sketch out how to run their campaign, Marín relies on the media coverage that the vice presidency of the Board gives him to make visible his message of stability and achievements made by his party since he is in power. This Friday he has already done so in Almería, accompanied by the Minister of Employment, Rocío Blanco, and is expected to multiply his activities this weekend, as has been requested by the national leadership in order to revalidate his leadership. Marín wanted the selection process to be fast and to be as inconspicuous as possible. This was how he had manifested it to his closest environment. His first wish has been fulfilled: the winner will be known just a week after his announcement. But the absence of media noise does not seem to be possible.