Jean Castex inaugurates the A355 bypass motorway in Strasbourg 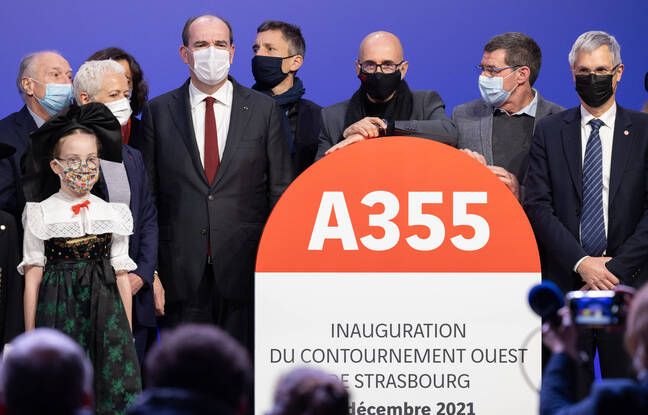 Prime Minister Jean Castex inaugurated this Saturday the A355, a bypass motorway west of Strasbourg, built by Arcos, a subsidiary of Vinci, the epilogue of a project debated for more than 40 years and which has been the subject of numerous disputes. This inauguration “marks the completion of an old project, the origins of which date back to 1973”, supported “without fault, throughout these years” by the State, declared the Prime Minister in front of an audience of elected officials and representatives of the Vinci group, including Xavier Huillard, CEO, and Pierre Coppey, president of Vinci Autoroutes, but in the absence of environmental leaders from the metropolis.

This 24-kilometer section of the motorway represents an investment of 553 million euros and is the subject of a 54-year concession signed between the State and Vinci. Environmental organizations had multiplied the remedies to prevent its realization and a ZAD had been evacuated in September 2018. Presented by Pierre Coppey as the “largest motorway project in recent years in France”, the work should make it possible to recover part of the road transit crossing Alsace from North to South, and relieve the A35 motorway, which serves the Alsatian capital.

Pierre Coppey praised the construction of this “low-carbon highway”, of “high environmental protection”, made possible by an “unprecedented device for protecting biodiversity and compensating” for the ecological impact. “The ecological and environmental benefits of commissioning will allow a very marked improvement in air quality throughout the Strasbourg metropolitan area,” added Jean Castex. “I fully claim and assume this achievement. “

Debate on the ecological balance sheet of the motorway

At the same time, a rally of opponents to this highway was held near another portion, bringing together “a hundred” people according to the organizers, including several mayors of the surrounding municipalities. The environmentalist mayor of Strasbourg, Jeanne Barseghian, boycotted, like other metropolitan elected officials, the inauguration ceremony, describing the project as “useless” and “ecological disaster”, in statements to the daily Latest News from Alsace .

In July, the Strasbourg administrative court, seized by the Alsace Nature association, recognized “inadequacies” in the site authorization application file, in particular on the effects of the A355 “on human health”, “Air quality” or the impact “on soils and subsoils”. The judge had imposed the suspension of the commissioning, but the State had lodged an appeal, and the Court of Appeal had annulled this suspension, without ruling on the shortcomings. The A355 motorway will come into service on December 17th.

Jalisco Congress: They install a window to receive ideas from girls and boys