During the two weeks spanning December 13-26, Mexico will maintain 27 states in green and five in yellow, according to the most recent update of the epidemiological traffic light of the Ministry of Health (Ssa).

In this Friday’s report, the Secretariat in charge of Jorge Alcocer reported that the epidemiological risk indicator for the COVID-19 pandemic it will remain with the same number of entities in the colors green and yellow, although there was a small variation on which they are. 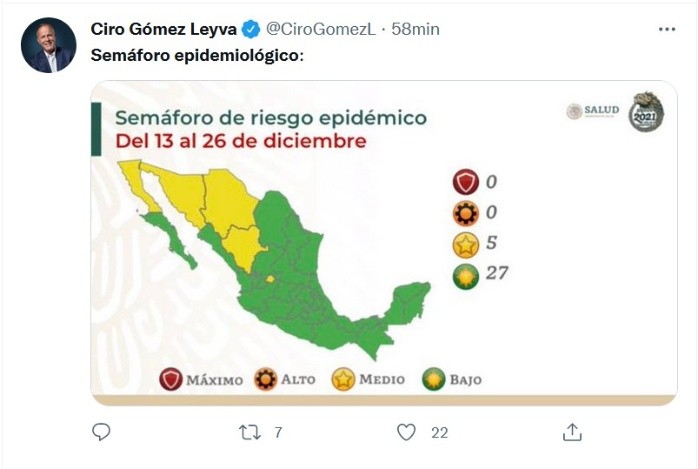 At the moment, and since November 28, there are no states in orange. Entities in red color have not been registered since September 5.

The Ministry of Health reported this Friday that the country registered 199 new deaths from COVID-19 to reach 296 thousand 385 total deaths, as well as two thousand 992 new infections for a total of three million 914 thousand 706 confirmed cases.

Of the total number of cases, there are 20 thousand 701 active, who have presented symptoms during the last 14 days and account for 0.5% of the total. In addition, since the beginning of the pandemic Three million 269 thousand 036 people have been recovered.

The average occupancy of general beds stands at 16% and the use of intensive therapy beds at 12%.

The authorities also indicated that within the vaccination program more than 138.12 million doses have been applied, adding 635 thousand 674 during the last day.

Of its 126 million inhabitants, 79.7 million adults in the country have at least one dose of the vaccine, that is, 86% of the total population of legal age. Of that total, 83% (65.80 million) have completed their vaccination schedule.