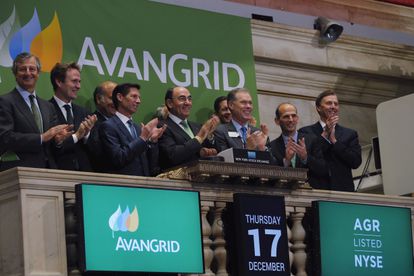 The president of Iberdrola, Ignacio Sánchez Galán, and several executives of Avangrid, in the IPO of the company in 2015.Lucas Jackson (Reuters)

A major blow for Iberdrola in the United States, one of its main growth vectors. The regulator of the State of New Mexico rejected the purchase of PNM Resources by Avangrid, the subsidiary of the first Spanish power company in the North American country, late on Wednesday. The five commissioners of the regulator justified their opposite vote for not being, they affirm, the best alternative for the interests of consumers and for the imputation of several senior executives of Iberdrola, including its president, in the Villarejo case for alleged payments to the retired commissioner. The no The operation, valued at 8,300 million dollars (7,300 million euros) between cash and debt, represents a significant slowdown in its foreign expansion strategy.

The majority of representatives in the body had already expressed their opinion against the purchase at the hearing held last week, arguing their concern both about Avangrid’s poor record of public service in the southern state and the fact that the president of its parent, Ignacio Sánchez Galán, is involved in Spain in the Villarejo case. But then it was three of the five commissioners (and not all of them, like this Wednesday) who were positioned against the merger by absorption. The potential harms, they said, outweigh the benefits. An opinion that they maintain.

“It is not the right partner at this critical time in our energy transition,” said the regulator’s chairman, Stephen Fischmann, before the vote. Other commissioners also voiced their reluctance about the impact the corporate operation would have on public service. The rejection contrasts with the general trend towards the consolidation of public services in the US, with several operations in this regard in recent times.

A total of five federal agencies, as well as the Texas state regulator, had completed their reviews and approved the operation. There was only the go-ahead from the New Mexico Public Regulation Commission, which has finally thrown it to the ground.

Both Avangrid and PNM Resources, a power company active in Texas and New Mexico, now have the option of requesting a new hearing. The markets, however, have already begun to discount the negative: PNM shares, which has scheduled an extraordinary meeting of its board of directors this Friday, were left 3% after the ruling. In Spain, Iberdrola shares fell almost 1.5% less than an hour after the close of the Ibex 35 on a slightly bearish day.

An Iberdrola spokesperson consulted by this newspaper referred to a statement in which its US subsidiary limited itself to showing its “disappointment” with the decision of the New Mexico authorities: “We are evaluating the next steps that lie ahead,” he pointed out. , leaving the door open to allegations. Avangrid sources went one step further, criticizing the ruling as “unfair” and hinting that, if necessary, they will go to the State Supreme Court of Justice. “It is absurd that they have not listened to 23 of the interest groups that have intervened in the case,” they remarked.

In the late afternoon Spanish time, the electricity company chaired by Sánchez Galán underlined in a note its “investment commitment” on US soil – where it has been present for almost two decades and which in recent years has become one of its great strategic bets— and remarked that it will take “all the appropriate measures” in defense of its interests, considering that the decision made by the regulator “is not the appropriate one”.

At its counterpart PNM Resources, disappointment is also the dominant note. The president and CEO of the US firm, Pat Vincent-Collawn, criticized that the regulator had not taken into account the “merits of the agreements reached [en el proceso de fusión]”And his refusal to hear any further arguments in favor of the transaction. The pact, he said, “would strengthen New Mexico’s future by partnering with a global company to address the challenges of climate change while ensuring affordable and reliable service for our customers.”

Iberdrola announced the acquisition of PNM Resources in October last year, in the midst of a pandemic. The integration was to give rise to one of the largest American energy companies, with a presence in six states, and the third renewable operator in the North American country. The combined company was to have assets of more than 40,000 million dollars (35,300 million euros at the current exchange rate), more than 168,000 kilometers of distribution networks and about 10.9 gigawatts of installed capacity. On a purely financial level, it expected a gross operating profit (Ebitda) of $ 2,500 million and a net profit of 850. The definitive closure of the operation was expected this year, but neither of the two companies expected that on its way the New Mexico regulator was going to be crossed.