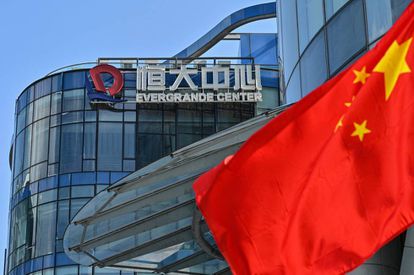 An Evergrande office building in Shanghai, in a file image.AFP

The bad omens continue to be confirmed for the world’s most indebted real estate company, China’s Evergrande. The rating agency Fitch has lowered its credit rating on Thursday and declared it in partial suspension of payments because it assumes that the Chinese brick giant has officially defaulted on the repayment previously agreed with its dollar lenders. This score, the penultimate on the scale of the US rating agency, is given to debt issuers that default on their obligations but do not stop operating or enter bankruptcy or liquidation processes.

The real estate group founded by Xu Jiayin in 1996 faced the end of a 30-day grace period on Monday to face the payment of interest on a foreign bond of 82.5 million dollars (73.1 million euros), which expired on November 6. From Fitch they assure that, after trying unsuccessfully to contact Evergrande executives to confirm whether said debt has been paid, and considering that neither the company nor the creditors “have made any announcement about a refund,” they have assumed that the developer has not fulfilled its obligations.

Despite the fact that neither the company nor the Chinese authorities have corroborated the news, last Friday the Canton-based company warned that it had received a lawsuit from creditors to pay about 260 million dollars (almost 230 million euros) and that “there was no guarantee that the group had sufficient funds to meet its financial obligations.” On Monday, the suspicion that the company would formally default caused its shares to plummet 20% on the Hong Kong Stock Exchange, where it has accumulated an 87% decline so far this year.

From Fitch they also allude to the uncertainty about the plans of the company to negotiate with its creditors the restructuring of the debt overseas, since “there is hardly any information in this regard.” It has been confirmed that the Cantonese authorities met with Xu Jiayin over the weekend and agreed to create a risk control group in which, in addition to the founder and president of the real estate company, there are members of state companies and financial institutions .

This week’s would be the first default on a debt of the Chinese promoter, which since September has been saving each term for the payment of interest, on many occasions reimbursing its creditors at the last moment and after the moratoriums contemplated. Bloomberg estimates Evergrande’s debt in foreign bonds at up to $ 19.2 billion (almost € 17 billion) and several analysts fear that this first default will lead to cross-insolvency, in which a single creditor default may suffice. for others to claim the repayment of their loans.

Evergrande accumulates total liabilities of 300,000 million dollars (260,000 million euros), and last Friday announced a restructuring of the paper in the hands of foreign creditors. Since August, analysts who follow the day-to-day running of the sector fear that the default will generate a major crisis in the Asian giant’s real estate market, causing, in turn, the classic domino effect on the national and even global financial system.

However, the governor of the Chinese central bank, Yi Gang, has again assured this Thursday that the growing doubts about Evergrande will not infect the rest of the economy. In a video speech broadcast at a Hong Kong forum, Yi indicated that the group’s problems will be dealt with “under the rules of the market” and that “the rights of its shareholders and creditors will be fully respected based on their legal seniority.” . On Monday, the issuing institute announced that it would inject more than 166 billion euros into the economy, which many have interpreted as an attempt to counter the recession in the real estate sector, despite the fact that the Chinese government has given no indication of a bailout.

Evergrande became the main construction company in China, and its founder boasted in 2017 that he was the richest man in the most populous nation on the planet. However, since the Xi Jinping Administration passed a series of restrictions to control the industry’s debt level last year, the group has faced a serious liquidity crisis. The company’s problems have spread to other real estate firms, and the credit rating of its main rival, Kaisa Group, has also been downgraded this Thursday to the category of partial default by Fitch itself.