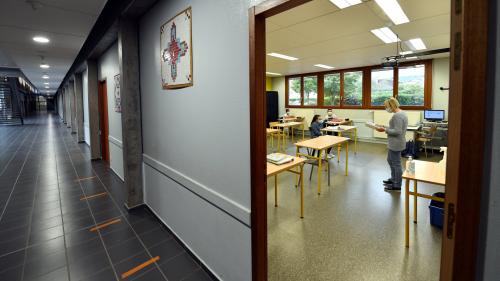 When the National Education lacks resources, retirees are called to the rescue. In several departments, retired teachers have been asked to replace them in the schools. This is the case of Alain, a 58-year-old retired teacher. He received a very official email in his personal box. It is signed by the inspector of the Seine-et-Marne academy. “I read it and then I’m torn between wanting to laugh about it, because I got out of it all, and anger,” he explains.

The phenomenon is not completely new, but this time, its scale is particularly striking. “It is written that there are no longer enough teachers to ensure the presence of a teacher in each class of the department”, explains Alain, who has been retired since September 2021 after 40 years spent in front of a class. He is asked to integrate the brigade of substitutes, these teachers who sometimes do tens of kilometers a day, at short notice to make up for the absence of a colleague from CP to CM2. answers this young retiree.

Another department, same case, or almost. In the Eure, Laurence, has been retired for a year and a half. She was contacted by phone. “The person I had on the phone seemed a little embarrassed, not really knowing how to tell the story, explains Laurence. We didn’t feel very comfortable.” For this teacher, who nevertheless loved her job, the The thought of returning to duty did not cross his mind: “No, not today. The profession has changed. I no longer feel too much in line with what is happening in National Education today. “

In the Eure, about fifty classes are currently lacking replacements according to a union count, a thousand students without teachers. In the past, this type of call for help in the direction of young retirees has already been made exceptionally. But Thierry Grignon, representing Snuipp in Seine-et-Marne, is shocked today by the massive and assumed character: “It is unprecedented to do it in such a transparent, frank and written way.”

According to Thierry Grignon, the Covid-19 and its consequences are only a catalyst for a more general problem, linked to the recruitment crisis. “Without the health crisis, we would arrive at this situation. The health crisis means that he simply arrives a little earlier “, explains the trade unionist. To his knowledge in Seine-et-Marne, no retiree has agreed to go back to school. Contacted by franceinfo, the rectorates concerned academies, of Normandy and Créteil, did not wish to react.

CAN 2022: the deadly stampede due to the “reckless” opening of a stadium door according to the Cameroonian Minister of Sports

His “mugshot” attracts all eyes