Hass avocado from Jalisco may be exported to the United States

Hass avocado produced in Jalisco may be exported to the United States. Agricultural authorities of the neighboring country authorized its importation for the harvest season that will begin in April 2022, reported today the Ministry of Agriculture and Rural Development (Sader).

The National Agrifood Health, Safety and Quality Service (Senasica) and the Animal and Plant Health Inspection Service (APHIS) signed the Operational Work Plan for the Export of Avocado from Mexico to the United States, whose initial scope involves Jalisco certified orchardsSader said in a statement.

He explained that the products of the orchards approved in Mexico, produced and packaged under this plan “may be exported to the 50 entities in the United States and Puerto Rico.” 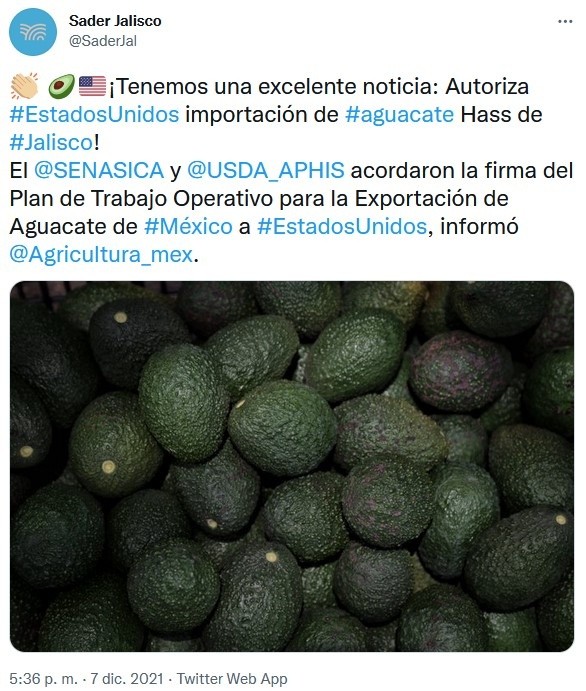 Sader and the United States Department of Agriculture (USDA) prepared the work plan at the request of avocado producers, packers and exporters, who expressed their willingness to participate in the export program and comply with the provisions of the document.

On 1997 the work plan for the avocado export from Michoacán to the United States, he recalled the dependence, and after 24 years of work and thanks to the trust generated by the work of producers, packers, phytosanitary authorities and service providers, since no fruits were detected with the presence of pests, “it was possible to expand the export”.

Producers will be able to start work towards export

He added that this work plan allows interested producers in Jalisco to begin to carry out the work to be in a position to export during the next season, which begins in April 2022.

“One of the requirements that must be met is that the regions have the status of quarantine pest free zone known as avocado borers, for which, Senasica foresees that the export will begin with Jalisco and then continue with the State of Mexico and Nayarit, which are the main avocado producers, after Michoacán, “the statement said.

La Sader stressed that he is currently in talks with Brazil, Malaysia, China, South Korea, the Philippines, Indonesia, Cuba and Chile, and shortly with Australia and Thailand, in order to open more markets for Mexican fruit and said that Mexico exports 1.3 million tons of avocado to 51 nations.

Mexico is the main avocado producer in the world, with a volume that in 2020 exceeded 2.3 million tons, which means 32% of the world production of this fruit.

The United States is the main consumer of Mexican avocado, followed by Canada, Japan, Spain, the Netherlands, France, the United Kingdom, Honduras, El Salvador, China and South Korea, among others.

Photogallery: Guatemalans “burn the devil” despite the risks of tradition

Economy in Jalisco: They seek to attract gourmet restaurants to the center of Guadalajara