Disappointed with the RN, ex-fillonists, “yellow vests” … We met the French who were at Eric Zemmour’s meeting 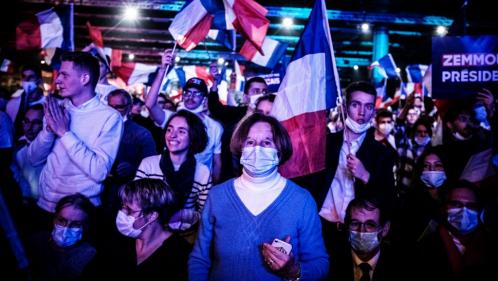 Sunday 5 December, 2 p.m. RER B trains are crowded at Châtelet station, heading for Villepinte exhibition center (Seine-Saint-Denis). Groups of young people wearing Gavroche-style berets, retired couples with tricolor flags protruding from the bag, or even Generation Z activists exchange noisily among themselves. All responded to the call of Eric Zemmour, their new champion. The former far-right columnist is giving his very first rally, five days after officially announcing his candidacy for the 2022 presidential election in a video posted on YouTube.

There, identity activists auction off a propaganda newspaper. “Ah, the real press! It’s not like all these macronist media”, launches a young man, blond lock combed on the side. A little more than “15,000” chairs were installed in the room, according to the organizers coordinated by Olivier Ubéda, the big boss of the show.

At the entrance, numerous identity checks, with no obligation to show your health pass. A pink mask has been placed on each seat, but many participants decide not to wear it. “This virus does not exist and the vaccine is useless, we can see it clearly with the current resumption of the epidemic”, justified Bernard, “‘yellow vest’ since the first day”. This 53-year-old Bordeaux truck driver is delighted to be there. He welcomes that Jacline Mouraud, one of the former figures of “yellow vests”, joins the ranks of candidate Zemmour.

“I hope that the demands of the ‘yellow vests’ will be brought by Eric Zemmour, our future president.”

The room fills up quickly. The ages and profiles of the participants are very varied but not really cosmopolitan. Groups of friends, students, retired couples, families with children, but also business leaders in suits and ties, lawyers, notaries or elected officials from the provinces… Some have come from afar, to the like Titouan and his father Willy, descended from Amiens.

“When I said I was going to attend Eric Zemmour’s meeting, some members of my family called me a fascist! But Eric Zemmour is not on the extreme right, he just loves his country: France “, Judge Titouan, 26 years old. There are still three months, he did not know the candidate of extreme right, condemned by the justice for “incitement to racial hatred” and “incitement to religious hatred”, and prosecuted in several other cases, in particular for “insult racist”. It was his father, in his fifties, who introduced him to it “on YouTube and in the show ‘Zemmour et Naulleau'”.

If the two men, respectively security officer and executive at the SNCF, insisted on driving an hour and a half, it is because “everything they like” at Eric Zemmour. The young man, who sports a T-shirt bearing the candidate’s image, is adamant: “Unlike everyone else, I find him sincere. He will do what he says and will not do all of this for the sake of glory, but for France and the French. “

This is also what Marie-Ombeline thinks, who came to support the essayist whose misogynistic remarks “act as a foil” for a majority of voters, as a recent Ifop poll highlights. Red cap “Zemmour 2022” screwed on the head, tricolor in the right hand and sign “Ben voir!” (verbal gimmick of the candidate) in the other, the 24-year-old Toulouse woman claims to have been assaulted “on several occasions in the street during the day”. In the hope that this does not happen again, she decided to vote Eric Zemmour, “the only candidate who will be able to protect the French”, according to her.

Sixtine, 22, agrees. This nursing student even joined the candidate’s campaign staff, accused of sexual assault by seven women. “He is the only one who will be able to protect women if he is elected. I have friends today who are afraid to take their dog out and who prefer to let him defecate in their apartment to avoid having a bad meeting. . You realize ?” ensures this active representative of the collective Les femmes avec Zemmour. The theme of insecurity often comes up in the aisles of the exhibition center. “My daughter is 9 years old, but when tomorrow she wants to go out clubbing, I will have a lump in my stomach and that, I want it to stop,” says Titouan.

But it is above all the fight of the former columnist against immigration which brings together most of the participants that franceinfo has met. For Pierre, there is currently “a form of dispossession of France of its traditional values”. This 31-year-old senior executive, who came with a group of friends, does not want to communicate his precise identity or be photographed. “If my other circle of friends found out that I came here, they would automatically call me a racist and I would never be able to see them again,” he regrets.

Originally from Marseille, he claims to have seen his city “deteriorate” in recent years, and blames immigration, “uncontrolled” according to him. “Zemmour made the correct diagnosis. We are no longer in France in Marseille,” he asserts. For Willy, who justifies his presence by the fact that Eric Zemmour would be the only candidate capable of fighting against illegal immigration, we must go further, by reducing social assistance for those who are not looking for a job. “In any case, the French will be able to express themselves on the subject with the referendum on immigration that Eric Zemmour wants to organize if he is elected. He will do what he says, unlike Nicolas Sarkozy who had bought his Kärcher at Lidl, “he blurted out.

Antoine, for his part, feels directly concerned by what he calls “these problems of migratory flows in France”. Born on French soil to a Venezuelan mother, this engineering school student in the Paris region says he does not understand “why all foreigners who settle in France do not have the same level of integration”. Having come to Villepinte with friends who are already convinced, this young man of 20, who attends his first political meeting, still wants to give himself time to think: “I voted for the ecologists in the European elections and for the Republicans municipal. I’m still looking for myself, but it’s true that Eric Zemmour tells truths that I like. “

This electoral volatility is present among many people who have come to listen to Eric Zemmour because they “saw him on TV at Laurent Ruquier or on CNews”. This is the case with Catherine. This retiree has read all the books of the former polemicist and wanted to come because she says she is disappointed by The Republicans. “The LRs are pursuing a leftist policy, too Macron-compatible and too pro-European Union for me. I even tore my card since I know that it is Valérie Pécresse who will represent the party”, she explains . With her husband Jean-Pierre, this 71-year-old grandmother supported François Fillon in 2017, “a candidate who embodied at the time the real right”, according to her.

She’s not the only one. Eric Zemmour would count more and more disappointed with the Republican right and former Fillonists among his supporters. “We were all at the Trocadéro in 2017 [pour le rassemblement de soutien à François Fillon], but The Republicans were unable during Emmanuel Macron’s five-year term to be a credible opposition. Even Eric Ciotti, he’s a dead star, “joke Xavier and Jonathan, two friends from Strasbourg. Others hesitate between Marine Le Pen and Eric Zemmour. Jean-Baptiste Vendeville, former executive of the National Youth Front ( FNJ), thus moved out of curiosity. “I did not choose between the two candidates, but I find it very impressive that a novice in politics brings together so many people with this fervor”, confides the thirty-something .

Two rows from him, Henri, 23, is proud to wave the tricolor, to sing the Marseillaise and to boo the journalists during Eric Zemmour’s speech. “Yes, he’s our Donald Trump! So, do you mind? Are you still one of those left-wing journalists who censor us?” he attacks when asked about his presence in Villepinte. A tone reflecting the tension that reigned in the meeting, during which a team of journalists from the “Quotidien” program was attacked, SOS Racisme activists violently attacked and Mediapart journalists beaten in the head. The latter lodged a complaint on Monday, and the Bobigny prosecutor’s office opened an investigation into “the acts of violence committed inside the meeting”.