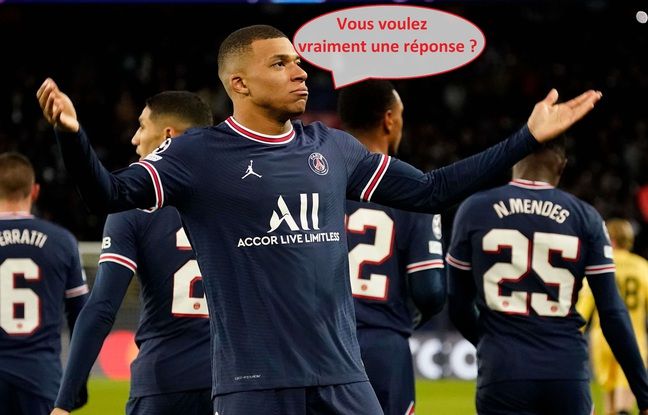 At the Parc des Princes,

Kylian Mbappé did not have time on Tuesday. People weren’t all home from work yet as Bondy’s beep beep had already ended the game against Brugge with an express brace. A flat of the safety foot full of composure in full surface in a forest of legs to start, then a not easy volley on an aerial balloon come from behind for the dessert. And too bad if it was aperitif time.

It’s very simple, when Kyky is in legs like that, nothing can happen to PSG. “There was no stake but the Champions League, it’s still the Champions League. We took this match seriously, we wanted to warm up our audience a bit and that’s what we did, appreciates the striker. We did a full performance. “

For once, it is true that he was able to count on his little comrades to have fun. His relationship with Lionel Messi and Angel Di Maria has been fluid as never before this season, with the two Argentines never reluctant to serve him – and vice versa. All with great freedom of movement. The Belgians did not know where to defend, especially during the first 45 minutes, and Mbappé had a great one on one. Enough to make Mauricio Pochettino smile at a press conference.

Decisive in each of the six group matches

“I’m very happy, we saw a natural relationship between them. This is what we are looking for, with this freedom too, explains the Argentine coach. There are automatisms that we work on in training, but we need a balance with the expression of talent. We give ideas, a framework, but we do not want to deprive talented players of expressing themselves on the field. “

If the former technician from Tottenham saw “a step forward” in the offensive animation, he still owes it especially to his number 7, at the start of all dangerous actions until his exit five minutes from the end , to the park’s ovation. Like since the start of the season, in fact. In the slump that has (too) often accompanied Parisian outings, Mbappé has survived. Decisive in each of the six Champions League group matches, he has now reached eleven goals (including 4 in C1) and twelve assists (4 also in C1) this season.

06:23 – After just 6 minutes and 23 seconds, Kylian Mbappé scored a player’s 2nd fastest brace at the kick-off of a Champions League match, behind Rodrygo for Real Madrid against Galatasary in November 2019 (06:13). Lightning. #PSGCLU pic.twitter.com/0J00kzPNJr

The world champion has been the Parisian compass in a collective which is still seeking its identity. One wonders where this team would be at this stage if he had left last summer. Better for everyone not to know the answer, and one hardly dares imagine the void he will leave if he decides to sign for Real Madrid in a few months. For once, Qatar’s money will be powerless. Because it is not the cyborg of Borussia Dortmund, or another, who will be able to replace him like that.

Mbappé is essential in the Parisian game. Messi’s first goal on Tuesday is him, after dropping poor Hendry on the highway area along the line. Neymar will soon be 30 years old and it is not known if he will be able to become something other than a very brilliant intermittent again. Messi is a genius but cannot represent the future. Paris needs the speed and explosiveness of the French, who has become the youngest player in C1 history to reach the 30-goal mark on Tuesday.

“I’m trying to help the team. I know that when I’m in good shape, it will help the team. It is not my objective to show who is the boss or not, proclaims the person concerned, questioned on his personal case. I try to help my teammates, and like that I know that they will give it back to me so that I can perform well too. “

He is not the boss, but it was still him who decided to give the penalty to Messi in the second half, when he was the designated shooter. But Mbappé, able to be grumpy when a pass does not happen to him, is the type to see beyond the tip of his nose. “We’re going to need him this season,” he said of the seven-time Golden Ball. I am sure he will help us when the important deadlines come up. The most important thing is that he arrives with confidence for these matches. That he ends up with two goals is good for him of course, but also for us in the future. A future that is being written until the end of June, already. And then after we’ll see.

Abuse of power is never the victim’s fault, not even in a popular talent show

Presidential: in Aubervilliers, Anne Hidalgo is determined to continue her campaign