A challenge to claim the metro: 243 stops in 15 and a half hours

With the pandemic, many people have become afraid of subways, trains and buses, where there are usually crowds, despite the fact that experts emphasize that with masks and ventilation the risk of infection is low. Three young people have done the opposite of avoiding this means of transport this Tuesday: they have traveled the 243 stops of the Madrid metro – excluding those of the Light Metro – in a single day to support public transport, which continues with fewer passengers since it was started the health crisis. Mateo Corral, Javier Carrasco and Olivier Przybylski, three Civil Engineering students between the ages of 18 and 22, have taken 15 and a half hours to traverse the entire network. “We love public transport and we want to claim it,” says the third of them.

The three students – two from Madrid and one Pole – started their day at 6.52 in the morning at the station in the town of Arganda del Rey (line 9B) and finished at 22.28 in Retiro (line 2), next to the park. Equipped with a map of the network, they crossed out the stops as they passed through them. At the end of some lines they connected with others with buses or commuter trains. “We want to give visibility to the subway, which is much more than trains and tunnels, it is its own system within the city that connects it and gives it depth. We used it almost like a sport, since in many sections we were running so as not to lose the transfers ”, says Przybylski.

This type of initiative, a mixture of claim and sport, began in London in 1960 and is called there ‘Tube Challenge‘—Something like the challenge of the subway. The objective is to visit all the stations of the system, although not necessarily all the lines — several lines pass through some stops; participants can link different stations on foot or with other forms of public transport. There is even a Guinness record, which in London is set in 15 hours and 45 minutes for its 270 stations. This idea has also reached other areas of the world, such as New York, Paris, Berlin or Madrid, where England’s Adham Fisher broke the record in 2017 with 12 hours and 15 minutes. 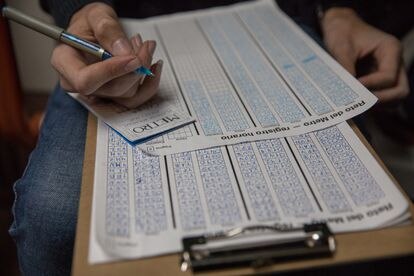 Javier Carrasco, Mateo Corral and Oliver Przybylski point out their route through all the Madrid metro stations. Victor Sainz

“We understand that the record [de Fisher] only includes stops in Madrid capital. We have also made those of Arganda, Leganés, Coslada, San Sebastián de los Reyes and Metrosur [que incluye los grandes municipios del sur], that is to say, the entire network except the Light Rail ”, points out the student. In any case, they do not intend to certify their brand, since for that it is necessary to be accompanied by a member of the Guinness Book of Records. Surprisingly, they were not affected by any incident throughout the day. “They cut the C-3 and C-4 commuter lines between Atocha and Chamartín, and we had just taken the C-4 from Villaverde Alto to Chamartín, so we were saved from that closure for a matter of minutes,” he continues.

A sector in crisis

The general situation of public transport is far from being as festive as this day. According to International Union of Public Transport (UITP) —Which brings together the main operators from more than 100 countries—, subways, trains and buses are still well below their level of pre-pandemic use, while mobility by private vehicle, in general, has recovered. The most recent data from the UITP show that the services of the Barcelona Metropolitan Area (which include metro, tram and buses) are with a passenger occupancy of around 75% of those they had in 2019. Meanwhile, in Madrid they are around 80% of travelers from the old normality – a little more on buses, a little less on subways and commuter lines -, a figure similar to that of Bilbao. Valencia’s municipal buses continue at around 70%, that is, 30% below the previous figures.

Many users are still reluctant to use collective means of transport again, so the sector continues to experience a deep crisis. At the beginning of the pandemic, without security measures, there could be a risk in subways and trains due to the crowds. But numerous scientific studies confirm that with current measures – masks, disinfection, air filtering – the means of transport does not represent a risk in itself, and they rule out that this environment is one of the main sources of infection.

To fight against this trend, the Ministry of Transport, Mobility and Urban Agenda launched a campaign a few days ago that conveys to the streets that public transport should be the backbone of the new mobility. Due to the wide diversity in the offer, the comfort, the security and the option of having access to information on the lines and frequencies by digital means. The initiative responds to the most listened to demands in the sector and also, according to the department directed by Raquel Sánchez, “to the need to implement the Mobility, Safe, Sustainable and Connected Strategy 2030”, whose purpose is to base the public policies of mobility in the needs of citizens, fulfilling the Sustainable Development Goals.