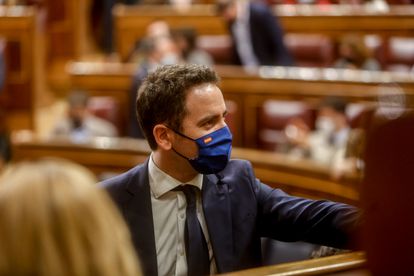 The secretary general of the Popular Party, Teodoro García Egea, in a plenary session in the Congress of Deputies, on November 30. Ricardo Rubio (Europa Press)

A court in Murcia has opened preliminary proceedings against the president of the autonomous community, Fernando López Miras, and the secretary general of the Ministry of Health, Andrés Torrente, whom Podemos and Izquierda Unida denounced for bribery for, supposedly, having mediated to advance the terms of a surgical operation to a relative of the general secretary of the PP, Teodoro García Egea.

The Court of Instruction Number 7, on which the case has fallen, has asked the public prosecutor to report “on the legal viability” of that complaint “prior to deciding whether or not to formally direct the procedure against the denounced ”, as reported by the Superior Court of Justice (TSJ) of Murcia.

The case came to light from information published in the digital newspaper InfoLibre last June, which released photographs of a mobile phone that supposedly showed a conversation on WhatsApp between the Murcian president and García Egea, friends since their youth. In it, López Miras indicated the date of the operation planned for the relative of the PP secretary general. According to the digital medium, the conversation showed that it had been mediated to advance the date.

The images were taken during the course of a plenary session in the Murcia Regional Assembly and, since then, photographers and journalists have been banned from entering the plenary hall during parliamentary sessions and images can only be taken at the beginning of them.

The regional PP has announced that it will file legal actions for “this false complaint because those who violate the dignity of people must bear the consequences of their actions,” reports Elsa García de Blas. The secretary general of the Popular Party of the Region of Murcia, José Miguel Luengo, has set his sights on Podemos, a formation that he accuses of using Justice for its political ends “knowing that the complaint against the president, Fernando López Miras, is flatly false, “according to a statement from the popular. The regional spokesperson for the PP, Míriam Guardiola, has regretted that the complaint against López Miras and García Egea only “tries to stain the honor and prestige of honest people” and has described it as “a lie” to “discredit the good name of impeccable politicians ”.

The Virgen de la Arrixaca hospital in Murcia, where the surgical intervention was carried out, also opened an internal investigation in this regard, which determined that the patient had followed the usual channels of transfer between centers (since that center was not his hospital of reference) and ruled out possible favor deals. In addition, the PP denounced the director of Infoliber and the editor who wrote the information for a possible crime of revealing secrets for having disseminated data from a private conversation and also medical data of Egea’s relative.

For the leaders of Podemos and Izquierda Unida in the Region of Murcia, the opening of preliminary proceedings against the two high-ranking officials of the PP show that there are signs of irregular action. “It is not the first time that they play with people’s lives. The VIP vaccines to high positions in January already showed how much they think about themselves and how little the lives of others matter to them. This scandal is one more proof, ”said the coordinator of Podemos in Murcia and deputy Javier Sánchez Serna, alluding to another controversy, the late vaccination of the former Minister of Health, who ended up resigning, and other senior officials in that department.

For his part, the coordinator of IU in Murcia, José Luis Álvarez Castellanos, has warned that “these shenanigans have fatal consequences”, and recalled that two doctors from the Virgen de la Arrixaca have also filed a complaint for the alleged manipulation of the waiting lists in cardiology, in which they warn that some 30 people may have died when their date of intervention was delayed to the detriment of other patients.

Iran: the veil, still a symbol of feminism?