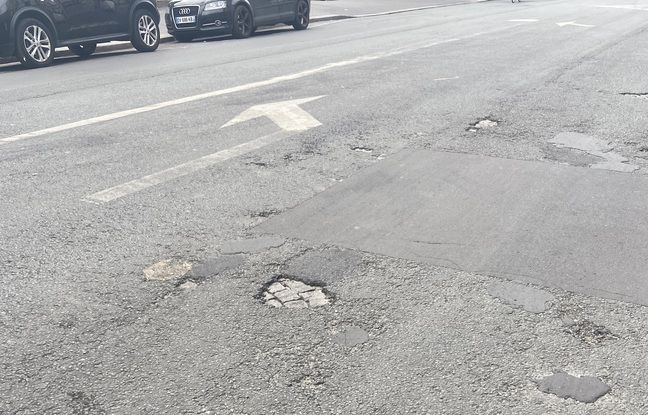 It’s not Easter yet, but potholes seem to be in season in Paris. “The street of Captain Ferber in the 20th district is worthy of Paris-Roubaix”, points out Philippe who answered our call for testimonies. Hassen indicates the “boulevard des Maréchaux from Porte de Versailles to Balard on the right side towards Garigliano, with many holes on the roadway including at pedestrian crossings. A horror ! “For Frédéric, the road between 73 and 84 avenue de Suffren reminds him of a” track in an underdeveloped country “.

On the side of user associations, same topo. “The road is badly degraded, it’s obvious,” says Jean-Marc Belotti, coordinator of the federation of angry bikers. “Disgusting, abandoned”, engages Pierre Chasseay, general delegate of 40 million motorists. “There are a lot of old cycle paths that should be renovated,” adds Camille Hanuise, director of Paris en Selle.

A rare unanimity between these various actors which indicates the importance of the problem, of which the town hall of Paris indicates to be aware. “Some potholes are really dangerous, denounces Jean-Marc Belotti. Several bikers called us because they had fallen or had broken a rim on it. “” I had a serious accident because of successive potholes in front of the Saint-Louis hospital, supports Marie, a reader. My Vélib’electric hit me and I broke my leg. “Thierry, he has completely stopped riding an electric scooter between the 2nd and 10th arrondissements. “My tires are tubeless and this road is too dangerous. “

Jean-Marc Belotti who organizes “regular pothole operations, where they are tagged to report them”, complains about the material used for the repair. “The services of the town hall fill with liquid tar, which takes very little time,” he points out. As soon as the weather is nice and hot, the tar becomes liquid again and goes away. And when the car tires pass, they gradually tear off this tar. It lasts three weeks, then the hole comes back. “Philippe, a resident of the 16th arrondissement regularly watered by cars driving through waterlogged potholes, also reports that” the tar has been put back, but in a few months the holes are re-forming “.

For Pierre Chasseray, “non-maintenance is an economic error since repair costs 7 times more than maintenance”. He thus puts forward the idea of ​​a “technical control of the roads” and encourages “to act before the pothole, from the crack where the water infiltrates before turning into ice in winter and crack the coating ”.

It improves (a little) for the bike

But is the situation getting worse? “It is clear that the situation is not improving. Does it degrade? I don’t know, ”concedes Jean-Marc Belotti. It is only Camille Hanuise who notes a slight improvement, probably linked to the town hall’s policy in favor of cycling, citing the new tracks on avenue de la République or rue du Faubourg Saint-Antoine. “We realize that when we have a quality coating, it increases the comfort for the cyclist,” she analyzes. But for the director of the association of bicycle users, the account is still not there. “Overall, there is a culture of not renovating the bike paths as much as the rest of the road,” she said. And to quote the “bad state” of boulevard Malesherbes or “the bicycle path of boulevard de Belleville with potholes, hollows, bumps and bubbles under the asphalt”.

If the associations of Pierre Chasseray and Jean-Marc Belotti regularly report road problems to the services of the town hall, Paris en Selle is also consulted on the implementation of new developments. “For example, we are asking to remove the 20 cm gutter on the right which cuts off the cycle path,” reports Camille Hanuise. Having a single track is a game-changer. “

Finally, a Parisian specificity complicates the management of the road network, the pavement! To preserve the heritage beauty of Paris, “the architects of buildings in France are opposed to changing the coating, for example covering the paving stones with asphalt”, explains Camille Hanuise, who cites the Champs-Elysées cycle path as an example. Jean-Marc Belotti also points to “the Louvre ticket offices with the small roundabout in front of the Pyramid where when you cycle, you bounce in all directions because it’s so stoned. There is no hole, but there is a difference in level of the paving stones which makes it extremely brittle. “

In its defense, the mayor of Paris ensures that “the budgets dedicated to the maintenance of the road network have not ceased to increase in recent years”, from 12 million euros in 2017 to 28 million in 2021 But for the moment this is struggling to translate into the feelings of users.