With each distribution, it is “the same thing”. In front of the Jean-Médecin residence in Nice, hundreds of students line up to collect a free food and hygiene basket. “It is the equivalent of 50 euros of shopping”, specifies Kamel Kefif Kadhi, president of the association.
Student solidarity action (ASE), which was created in September.

“We have talked a lot about student precariousness during confinement. But she didn’t stop. And above all, it has always existed, even before the coronavirus, ”he says. It is moreover from this observation that he got involved, himself still a student. “The trigger was when I was a volunteer at the Hanging Café [une association qui vient en aide aux personnes démunies, notamment par des maraudes] and that I saw four young people arrive who asked us for something to eat ”.

Food, hygiene and clothing products too

At 21, he decided to act. First, by creating a grocery store within the residence in February, then with this association. “A student is neither a child nor an adult. He’s in between and he’s trying to find his independence. The problem is that he feels a kind of shame and failure to do the action of going to the Restos du cœur or elsewhere. I’ve been told that some people just eat a tomato as a meal. They let themselves die of hunger and on the other side, supermarkets throw away tons of still edible food ”.

The ASE works with donations, notably from other Nice associations, and soon, directly with the Food Bank. “The idea is not to feed them completely but to relieve them of their expenses on this subject. This will allow them to concentrate on their lessons and on how to eat. A student must live, not survive ”. In addition to food and hygienic baskets, each day, a distribution of bread is offered thanks to unsold products from a partner bakery. “We also received the support of Jonathan Matijas who came to give new brand clothes to these people who cannot even imagine buying a new T-shirt”, adds Kamel.

“If I don’t have that, I’ll deprive myself”

The Niçois Jonathan Matijas, candidate of the reality TV The villa of broken hearts season 3 and former footballer, moreover officially became the godfather of the association last Thursday. “I am very proud to help just causes [ce n’est pas la première association qu’il aide à Nice], he says. It is important that everyone is mobilized for these students who are fighting and who do not have the means. “ 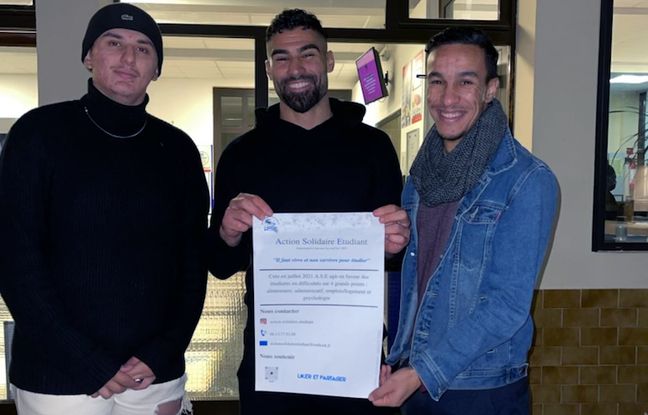 Kamel, the president of the association (left) with Jonathan Majitas (middle) and a volunteer during the formalization of the sponsorship of the former footballer – ASE

Among them, Sarah, 19, in law. She explains that the association “helps her a lot” and that without that, she “deprived herself”. “Between the rent, the charges, the cost of living, it’s too big a budget. And in addition, I work alongside, ”she exclaims. Mental loads sometimes too heavy which end up affecting the morale of the students. One of the association’s struggles is also to provide psychological follow-up and administrative assistance, as with housing.