The homeland of speaking “ch’ti” in danger? It was a draft circular from the Ministry of National Education that set fire to the powders. It is about teaching regional languages ​​and cultures. There are, as usual, Breton, Corsican, Alsatian, but also two new languages: West Flemish and Franco-Provençal.

Good news for the Senator (Various right) from the North, Jean-Pierre Decool, who has long campaigned for the teaching of West Flemish at the school, a language still spoken by about 40,000 people, around Hazebrouck and Bergues. “I am delighted with this decision, but it is a half-victory because I consider that the Picard should also be defended,” he explained to 20 Minutes.

“Contrary to the principles of republican equality”

Indeed, Picard, better known under the name of “ch’ti” language, was not retained in this circular, according to the Regional Agency for the Picard language (ARLP) which was aware of the content. This is why Jean-Pierre Decool joined three senator colleagues from different political sides (Max Brisson, Laurent Somon and Eric Bocquet), to bring the case before the Prime Minister, Jean Castex.

“We note and regret that Picard, the regional language of Hauts-de-France, recognized by the Ministry of Culture and used by around a million people (…) is absent from this list. This exclusion (…) would amount to depriving a large part of the population of this region of the transmission of its linguistic heritage ”, write the four elected officials in a letter sent to Matignon.

While they welcome the “provisions of this text which aim to secure and develop the transmission of regional languages, considered as national treasures by the heritage code”, they consider that forgetting certain languages ​​is “contrary to the principles of the republican equality ”.

A standard Picard for two years

The file is based on a new deal: Molac law on regional languages, adopted in May by the parliament, but whose device on immersive education was retested by the Constitutional Council. “To secure this education entirely in the regional language, which already exists in certain regions, the National Education had to write a circular which must be released soon”, indicates Olivier Engelaere, director of the ALRP which defends Picard. 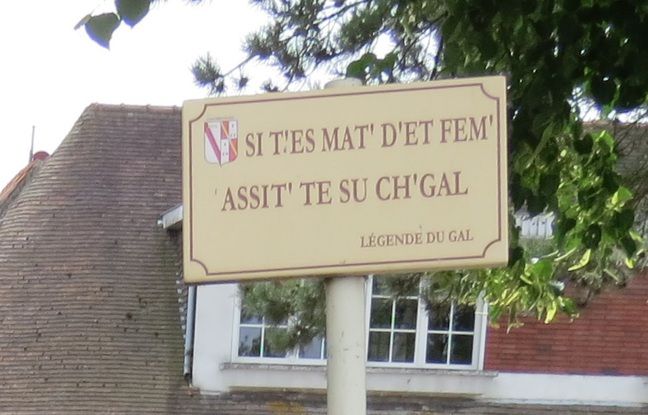 Example of signs inscribed in the Picard language, in Pas-de-Calais. – G. Durand / 20 Minutes

However, if this language is not registered, it is impossible for the rectorate of Lille and Amiens to offer linguistic education in Ch’ti. “It would be a shame because we developed a standard Picard dictionary two years ago and the fruit of these efforts would be reduced to nothing. Maybe we haven’t done enough lobbying? », Regrets Olivier Engelaere.

Why regional languages ​​are attracting more and more young people