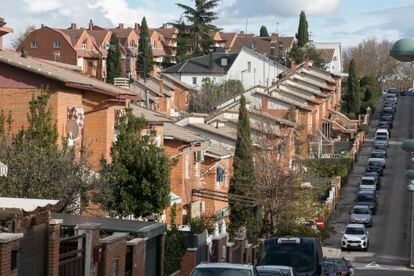 Single-family homes in Pozuelo de Alarcón, in an image from December 2020.

The mayor of Madrid, José Luis Martínez-Almeida, announced at the end of October the intention to lower the tax rate of the real estate tax (IBI), which will mean, when the new tax ordinance is approved, that the municipal coffers stop enter about 60 million euros. Since the beginning of his mandate, Almeida calculated, the tax cut has meant some 500 million savings for the residents of the capital (or loss for the City Council). His party partner and president of the Community, Isabel Díaz Ayuso, is also in favor of lowering taxes. Specifically, this year it has announced 0.5% in all sections of the Personal Income Tax (IRPF) and the abolition of the regional government’s own taxes.

Both justify these measures in that they will allow Madrilenians to have more money in their pockets to spend, with the probable increase in commercial activity and, therefore, in hiring. But they are not the only ones in the region. The rest of the large municipalities have approved similar measures, although without much media noise. The main city councils in the region, which include the entire political spectrum, have frozen their taxes and even reduced them, right in the middle of the crisis. The intention, they argue, is to help underprivileged families, small entrepreneurs and bars and restaurants, after the consequences of the coronavirus pandemic.

Alcala de Henares. This municipality of 193,750 inhabitants and mayor of the PSOE has approved that taxes be frozen during the next fiscal year. Of course, there will be news such as the reduction of the IBI for special employment centers, the elimination of the rate for small works – not very large repairs or reforms -, a new way of calculating for the collection of garbage from shops and free of sports facilities for young people up to 26 years of age, instead of the current 21, among others.

Fuenlabrada. The 193,600 inhabitants, with a socialist mayor, will also see the same amounts on their receipts as in the current year. The freezing of taxes will be accompanied, yes, by some reductions to promote the fight against climate change. Property owners who install solar panels or photovoltaic panels will have a 50% discount on the IBI. The construction, facilities and works tax (ICIO) will have the same reduction percentage for its placement. In addition, vehicles with zero emissions will be exempt from 75% of the Mechanical Traction Vehicle Tax (IVTM) and those with the eco label, 50%. 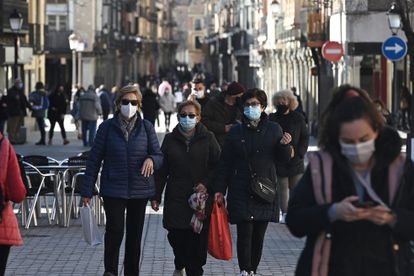 Neighbors of Alcalá de Henares walked through the center of the town last February.FERNANDO VILLAR (EFE)

Leganés. The 188,425 residents, governed by a PSOE councilor in this southern municipality, will keep taxes frozen. Like other municipalities, the main modifications were approved for 2021, such as adapting the tax rate of the IBI to the minimum established by law (0.4%) instead of the 0.369 that had not been updated for years with the last cadastral review. The garbage collection rate was also lowered by setting a percentage fee to industries, instead of weighing waste, and a small rate that was charged to the elderly for playing sports was eliminated.

Getafe. The City Council of this town with 180,750 inhabitants and mayoress of the PSOE will not raise taxes next year either. The main aid was approved in 2020 for this year, such as the 25% bonus for the self-employed and companies that carried out a temporary employment regulation file (ERTE). Commercial premises with a cadastral value of less than 200,000 euros and warehouses that did not exceed 1.5 million could benefit, in addition to the owners of establishments that forgive at least one month’s rent to their tenants. New companies that settled in the municipality or those that expanded their facilities had the same 25% IBI discount.

Alcorcón. The tax ordinances in this municipality of 169,500 residents and with a socialist mayor for 2022 also include the freezing of taxes. One of the measures that will be maintained next year is that the watching terraces will only be charged for tables and time (monthly), instead of for occupation of the public road. The rate will also have to be entered after the season and not in advance, as in other taxes. Large families will have a reduction in the IBI provided that the cadastral value does not exceed 300,000 euros.

Torrejón de Ardoz. The City Council (129,730 inhabitants; mayor of the PP) has approved a tax freeze for next year. There will be a 5% reduction for residents who domicile their bills. To this will be added that families with all their members unemployed for at least eight months in 2021 will be exempt from paying the IBI. According to municipal sources, it is the first and only town in the region that has taken this measure. Large families will have bonuses of between 10% and 90%. Companies that create at least 10 jobs will have a 95% reduction in the ICIO.

Parla. This Consistory with a socialist mayor also plans to freeze municipal taxes for next year, thus maintaining the same tax burden for the 128,250 inhabitants of this town in the south of the region.

Alcobendas. This municipality north of the capital with 116,000 residents and mayor of Ciudadanos has also frozen taxes. Of course, it has approved some reductions for job creation. The companies or freelancers that settle for the first time in the Municipal Business Center will have a discount of 50% to 80% in the prices of the premises. Firms that sign an Agreement for the Promotion of Employment with the City Council may benefit from up to a 50% discount in the Economic Activities Tax for up to the next five years. 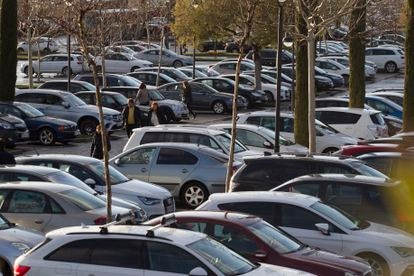 Parking full of cars at the Las Rozas Village shopping center in March 2018.

Las Rozas. The beginning of the year in this town of 95,500 residents and councilor of the PP arrives loaded with important tax developments. All taxes are frozen, as is the case in the rest of the municipalities, but there are significant drops in some. Specifically, real estate for commercial, industrial, office and leisure and hospitality use will see the IBI tax rate drop from the current 0.482 to 0.45%, the minimum allowed by law. The bonus for large families in the general category is raised from 50% to 70% and in the special category, up to 90% compared to 70% this year. In addition, the caps for the cadastral value set up to 950,000 euros are eliminated. Vehicles with Zero Emissions or Eco badges are rewarded with 75% exemption, which places them at the legal maximum. The ICIO is rewarded up to 95% when thermal or electrical utilization systems of solar energy are incorporated. Besides, there will be a reduction in the IAE when permanent or youth employment is created.

Saint Sebastian of the kings. The 87,700 residents governed by a mayor of the PSOE will be able to benefit from tax credits, especially in terms of environmental protection and sustainable mobility, as well as by direct debit of receipts. The IBI will have a reduction of 4% if it goes through the bank. In addition, the bonus for solar energy installation is extended from five to eight years. Companies that use or produce renewable energy or cogeneration or that implement a sustainable transport system among their workers will have a 2% decrease in the IAE in each case. The less polluting vehicles will see the reduction of the IVTM prolonged up to six years, instead of the current five. The cemeteries rate is reduced by 25% for families with low incomes and the market rate, 10%.

Pozuelo. The municipality with the highest per capita income in Spain —with 86,200 residents and a PP mayor— has approved a 5.6% reduction in IBI for 2022, going from 0.45 of the current tax rate to 0.425. This will mean that the municipal coffers stop entering 1,356,000, according to data provided by municipal sources. This is the third tax reduction in the last three years, when the tax rate was 0.5%. This decrease will mean 15% accumulated in these three years and that the Consistory, in the hands of the PP, stops entering 4.5 million euros.

Rivas. This municipality in the east of the region with 85,900 residents and the mayor of IU has also frozen taxes, but has approved some important bonuses for next year. In the IBI, it will no longer be necessary for members of large families to have to be registered in the same address as it was up to now. Thus, marital separations or children studying abroad are catered for.

The reduction due to the installation of photovoltaic panels will also reach commercial and industrial premises, in addition to high-rise homes. The bonus ranges from 50% the first year to 20% in the third and last. In the IVTM, electric vehicles will pay only 40% for five years and hybrids, for three. The ICIO will be reduced by 50% for the installation of photovoltaic energy.

Majadahonda. With taxes frozen in 2022, this City Council with 71,785 residents and mayor of the PP will see how it stops entering a million euros for the reductions in the IVTM. The new ordinance states that Eco and Zero emissions vehicles will see their tax reduced by 75%, while those with a C label will see their exemption increase from the current 25% to 60%. Municipal sources calculate that the drop in taxes in recent years has saved residents of 2.5 million euros, including that of 2022.

One of the problems that the City Councils are having the most headaches at the end of this year are the consequences of the recent declaration of unconstitutionality of the Tax on the Increase in the Value of Urban Lands (IIVTNU), better known as surplus value. The technical and legal departments of the Finance Councils are working around the clock to adapt the royal decree approved by the Government of Pedro Sánchez, following the ruling of the Constitutional Court that prohibited it. This legal body understood that the tax event did not conform to reality, since the tax is paid even when the property had depreciated since the initial purchase. The capital gain was paid to the municipalities when a property was sold, inherited or donated.

The municipalities have a period of six months to adopt the new legislation, but they recognize that, the longer they take to do so, the more money they are stopping entering. After the transfers they receive from the central Executive and the Real Estate Tax (IBI), the IIVTNU was a very important source of income for local corporations. Only in the case of Madrid, it meant about 500 million euros per year.

Some municipalities such as Alcorcón immediately suspended their collection to avoid legal problems and subsequent claims. Now, local entities hope to have this problem resolved, because the economic loss is such that it could jeopardize some basic services and force them to postpone future investments already planned or pending tender, according to several councilors consulted.

Netflix last chance: these 35+ movies & series will disappear in the coming days - Paudal