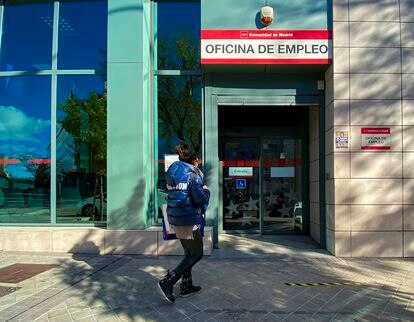 An employment office in the Community of Madrid, December 2, 2021. Eduardo Parra (Europa Press)

Spain was the industrialized country where the weight of collection over GDP grew the most in 2020: an increase of 1.9 percentage points, which has pushed the tax burden from 34.7% to a maximum of 36.6%, according to the Annual report on tax revenue published this Monday by the Organization for Economic Cooperation and Development (OECD). The reason for the rise, explains the agency, is not due to an increase in tax rates, but rather because GDP fell more than nominal tax revenues. An outcome that is not exclusive to Spain, and that reflects the very different response that national states have given to the COVID crisis compared to the Great Recession.

“Government support measures may have indirectly boosted revenues, to the extent that they managed to reduce job losses and business closures. Therefore, these measures have contributed to nominal falls in tax revenues that are weaker than those recorded during the global financial crisis of 2008-2009, ″ explains the body representing the most advanced economies on the planet. According to its report, taxes on personal income and social contributions were the figures that held up the best – they even grew as a percentage of GDP – while corporate tax was the hardest hit.

The idea that the pandemic represented a shock economic This temporary movement, originating from a health emergency rather than an economic imbalance, convinced the States to bring out heavy artillery to try to keep homes and businesses afloat during forced confinements. In other words: expand spending to bolster healthcare and prevent economic activity from slipping further, rather than cutting them as in the previous recession.

In this logic, temporary employment protection schemes have been key. The flexibility of ERTE in Spain – a measure inspired by the so-called short-time work German – has managed to mitigate the fall in rents and save companies from the collapse of activity. While GDP fell by almost 11% in 2020, the biggest drop among OECD countries, collection fell by 8.8%, according to the Tax Agency. With the financial crisis, it was exactly the other way around: tax revenues fell much more than economic activity.

The average tax burden in the OECD grew less than that of Spain – as did the group’s activity – 0.1 percentage points, to 33.5% of GDP. It increased in 20 of the 36 club economies for which data is available; In addition to Spain, Iceland and Mexico also experienced increases above one percentage point, although the Latin American country continues to be the one with the lowest fiscal pressure in the OECD (17.9% of GDP). At the other extreme is France, with 46.5%.

The biggest drops, on the other hand, occurred in Ireland (1.7 points), mainly due to a temporary decrease in VAT, Chile (1.6 points) and Norway (1.3).

The increase in the tax burden in Spain, which with 36.6% of GDP reaches its highest ratio ever recorded – and still lower than the EU average – is largely due to the fact that social contributions fell less than activity (4.8%) and, consequently, increased as a percentage of GDP. The same happened in 29 other OECD countries, in 13 of them with increases of more than half a percentage point. Only seven countries experienced a reduction.

The OECD treats Spain as if it were a federal state, due to its decentralized structure crystallized in the broad fiscal autonomy enjoyed by the communities. In this case, the body takes into account the data related to the year 2019: the central administration’s income accounted for 40.2% of the total, below the club average of 53%, as well as the regional collection: the 15.4% compared to an average of 17.7%. On the contrary, local entities contributed more than the average to GDP: 9.2% compared to 7.7%.

During the year of the pandemic, the income of the municipalities was the ones that held up the best. Local entities are responsible for collecting taxes that are less sensitive to fluctuations in economic cycles, such as taxes on real estate or those relating to lighting or waste. The communities, for their part, enjoyed the great support provided by the State: responsible for providing basic services such as health and education, the Government decided to provide them in 2020 and 2021 with the largest resources in their history.

Thanks to this additional income and the general improvement in collection, the communities recorded their largest surplus until September of this year, with a positive balance of 9,238 million euros.

The Government, for its part, already had the objective before the pandemic to raise revenue from GDP for all Administrations by about five percentage points, and thus reach the EU average. For this, the Ministry of Finance has committed to Brussels to undertake a comprehensive tax reform and has appointed a committee of experts that is working on it, and whose conclusions will be known in February.

The average tax burden in the OECD has increased in the last decade, from 31.6% in 2010 to 33.5% of GDP in 2020. But the trend was not the same in all club countries. The largest increase was recorded in the Slovak Republic, with a jump of 6.7 percentage points, and in Greece (6.5). Increases of more than 5 percentage points also occurred in Korea, Spain, Japan and Mexico. In total, the tax-to-GDP ratio grew in 30 countries of the group, and fell in the remaining eight. The largest decrease was observed in Ireland, which went from a tax burden of 27.7% in 2010 to 20.2% of GDP in 2020, followed by Norway.

The infected-vaccinated protected twice as long as the vaccinated