Pilar del Río: “Saramago discussed the dogmas, but he knew on which side of the world he was”

Pilar del Río (journalist, Granada, 71 years old) speaks in a very low voice, as if she is listening to the past and does not want to wake him up from his dream. She is the widow of José Saramago, with whom she went to live in Lanzarote in 1993. They alternated their life in Tías, at the top of the island, with their stays in Lisbon and with trips around the world. The Nobel, author, among many other works, of Essay on blindness, She lived in Lanzarote for two serious health episodes, in 2008, when she was about to die and perhaps only Pilar del Río was convinced that she would be saved, and when she could no longer, in 2010, when she died at 87 years of age. This fall has just begun the celebration of the centenary of the man who was born, very poor, in 1922 in the Portuguese Alentejo and ended up being one of the most powerful minds in world literature.

This last weekend these activities, which began at the University of Seville, continued at the Tías theater, Lanzarote, near the Saramago Foundation headquarters, with a recital of the poetry of the Nobel Prize and other authors, by the actor José Luis Gomez. At this time, says Pilar del Río, when she hears so much about her husband, she feels that that “glow” is still alive, that she also sees and that she perceives in the readers. “He told them things that they felt, we felt, respected.” A centenary library, designed by Manuel Estrada for Alfaguara, has just been inaugurated with the first edition in Spanish of The widow, his first book published in Portugal when he was 24 years old. Now Pilar del Río has written a 170-page book (The intuition of Lanzarote. Editorial Itineraria) in which he writes “about José, never about me, it gives me a lot of cut and my voice doesn’t come out of my body”. She likes to “narrate episodes of José. Ask me and I’ll go in for everything ”.

Question. What would be the most important event that José Saramago experienced?

Answer. The publication of his books, the fear he suffered just when he finished them. In personal life, the commitment to live forever together. We got married twice! We got married in Portugal, but in Spain we were still divorced, so many years later we got married here too.

Q. Can you tell if you knew you were going to be Nobel?

R. I knew 24 hours before. The professor in charge of the Swedish Academy to locate José called me. What for, I asked and reprimanded him. He had translated the motivation for José receiving the Nobel. When he told the truth, he told me that if it were known his job was in danger. I didn’t even tell José. Thus he avoided a nightmare night. Saramago told how he received the news. At the Frankfurt airport a flight attendant told him: “You have received the Nobel.” And he met his Alfaguara editor, Isabel Polanco, told him and they hugged. His Portuguese editor, Zeferino Coelho, demanded that he return to Frankfurt, from where he was leaving. He was carrying his briefcase and his raincoat down a lonely corridor. The first thing he thought about was how Camoens would be. Camoens was our dog’s name.

Q. What did that Nobel mean to you?

R. A multiplication of tasks, requests, more time on the phone. And the awareness that it was something very important for Portuguese literature and for the literature of Saramago. In any case, the Nobel is more important for those who have not received it. When you have already received it, you don’t talk about it anymore.

P. In those years you had already displayed your political commitment in America. The Nobel did not interrupt anything.

R. The Nobel does not buy. Some members of the Academy who awarded it were cooperators in Africa. Saramago had gone to Timor, when the massacres. He had been in Chiapas, he had been with the relatives of the disappeared in Argentina and he was not going to go to another shore because he had received an award. Saramago was an open man, he discussed all dogmas, but he knew on which side of the world he was.

The Nobel is more important for those who have not received it. When you have already received it, you don’t talk about it anymore.

P. Did political work give you health or leave you exhausted?

R. Political work was an obligation and he understood it as a duty. He had received a lot and had to give a lot. Exhausted? He was exhausted from living and working, but he didn’t stop until just before he died, because he also felt like he wanted to say things. He did not want to die “without having said everything.” And the last two things he said have to do, in Cain, with the role of God or the use of the factor of God in the domination of human beings of conscience, and with the ethics of responsibility, in Alabardas, Alabardas…

Q. What did it mean to him to have said everything?

R. Having written in Cain the continuation, in some way, of The Gospel according to Jesus Christ, and having told his contemporaries that he is not indifferent to our participation that the climate deteriorates, that we live certifying that there are wars, that every time we say “this does not go with me” we are letting the gangsters advance, charge the jungle and organize wars to experience your weapons. 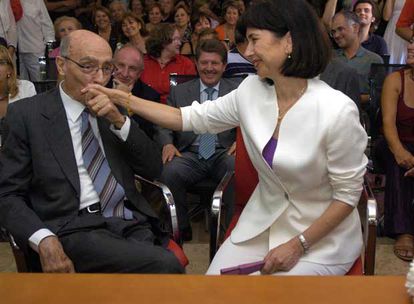 Q. He was a leader. How did you receive this popular support?

R. He did not write because he had a very big ego and needed to polish it. He wanted to communicate with his contemporaries and received responses that he was grateful for without any signs of impatience… José was already very old, and he was ill. We would go to the dentist and go down a street in Lisbon. He was on my arm and suddenly a pregnant woman passes by whom he wants to give way. The lady touches her belly and says: “Excuse me, Mr. Saramago, let me be able to tell my daughter one day that we gave way to José Saramago on the street.”

Exhausted? He was exhausted from living and working, but he didn’t stop until just before he died, because he also felt like he wanted to say things.

P. At the Seville congress, Professor Carlos Reis [catedrático en Coimbra y estudioso de Saramago] He said that one of his big issues was God.

A. The God of the Bible and of Christian civilization does not like him. He likes Jesus Christ. God is unsympathetic to him. For EL PAÍS he published his article The God factor… At home we had a cross on his table. For the man who carved the cross. And he had a collection of gods. They were images of hope or despair for him. The criminal use that humans make of God seemed horrifying to him.

Q. What is the most unforgettable of your gestures for you?

A. Don’t give up. Always walk at a speed that even when I was old and sick, the rest of us followed, because I was always at a cruising speed. He kept writing, he kept talking, and a few months before he died he presented his latest book in Madrid. I can say that few times I saw him more beautiful than defending those ideals, in the Casa de América in which it would already be his last trip, because he would return to Lanzarote and would not go out anymore. And I saw it beautiful, I saw it beautiful. 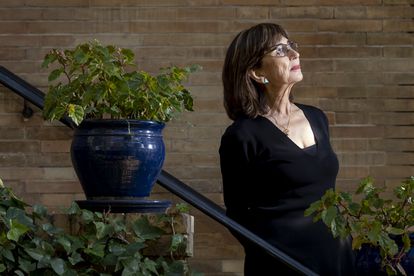 P. You accompanied him to meetings with greats in politics and literature. How was the meeting with Fidel Castro?

A. The first ones were interesting. We celebrate a new year together, with our whole family. On another occasion it was when José said “we have come this far.” José was against the death penalty, and they had sentenced a person who had wanted to leave the island. There it was harder because Fidel explained and explained and José cross-examined and cross-asked. José could not forgive under any circumstances that capital condemnation, neither in Cuba, nor in the United States, nor in any country.

Q. How did Fidel Castro react?

R. I understood. That the judges had made those decisions because there was the death penalty, unfortunately, which perhaps would be avoided so there were more situations like that that put other lives in the ocean at risk. Anyway, he had his explanations. Then they led to another conversation, but with a more forced relationship. They ended up shaking hands.

Q. You were very ill and only you believed that you would recover. In his Portuguese home he said that he had resurrected him, “I have returned …”

A. He found out that he had leukemia. Pneumonia made life more difficult for him. But he had a recovery process after which he wrote The journey of the elephant, which is, in a way, the recovery of his country, and especially of his language. It came from within. And when he returns to Lisbon to present that book and the exhibition The consistency of dreams prepared by Fernando Gómez Aguilera in Lanzarote, it is as if he had deepened his relationship with his country. Did again A trip to Portugal, like the title of that book of his.

P. The Government of Cavaco Silva prevented The gospel… agreed to a European award and that motivated his march to Lanzarote, with you. Was the relationship with Portugal difficult after 1993?

A. He had a splendid relationship with his country. The country rose in joy when he received the Nobel. But he had a horrible relationship with a government that had allowed itself the luxury of censoring a book and committing many economic atrocities. What makes him angry is not the country, it is Cavaco. His only gesture of dignity was to be absent so as not to go to José’s funeral.

P. He lived in Lanzarote since that year. He is from the island. And from Spain?

R. From the Spains. Even for a Portuguese it is difficult to understand the relationship we have here in Spain. In fact, when he came to Andalusia, he became Andalusian. Later, with Manuel Vázquez Montalbán and with others, he got to know Catalonia, and later he became completely involved with the Basque Country and with the peace process. And, of course, with the Canary Islands. He has an extraordinary relationship with the Iberian Peninsula. He spoke of Spanish fortune, with so many languages, so he defended multicultural dialogue, and that is why he brings Spain and Portugal together in The stone raft.

Q. Where does the stone raft that he dreamed of go?

A. We are a bit stuck in the middle of the sea. If it does not advance, it is because we are talking about whether they are greyhounds or hounds, instead of doing important things. Governments lack imagination.

CAN 2022: the deadly stampede due to the “reckless” opening of a stadium door according to the Cameroonian Minister of Sports

His “mugshot” attracts all eyes

Erika Aifán: “In Guatemala, justice advances because there are judges who, despite the risks, do their job”