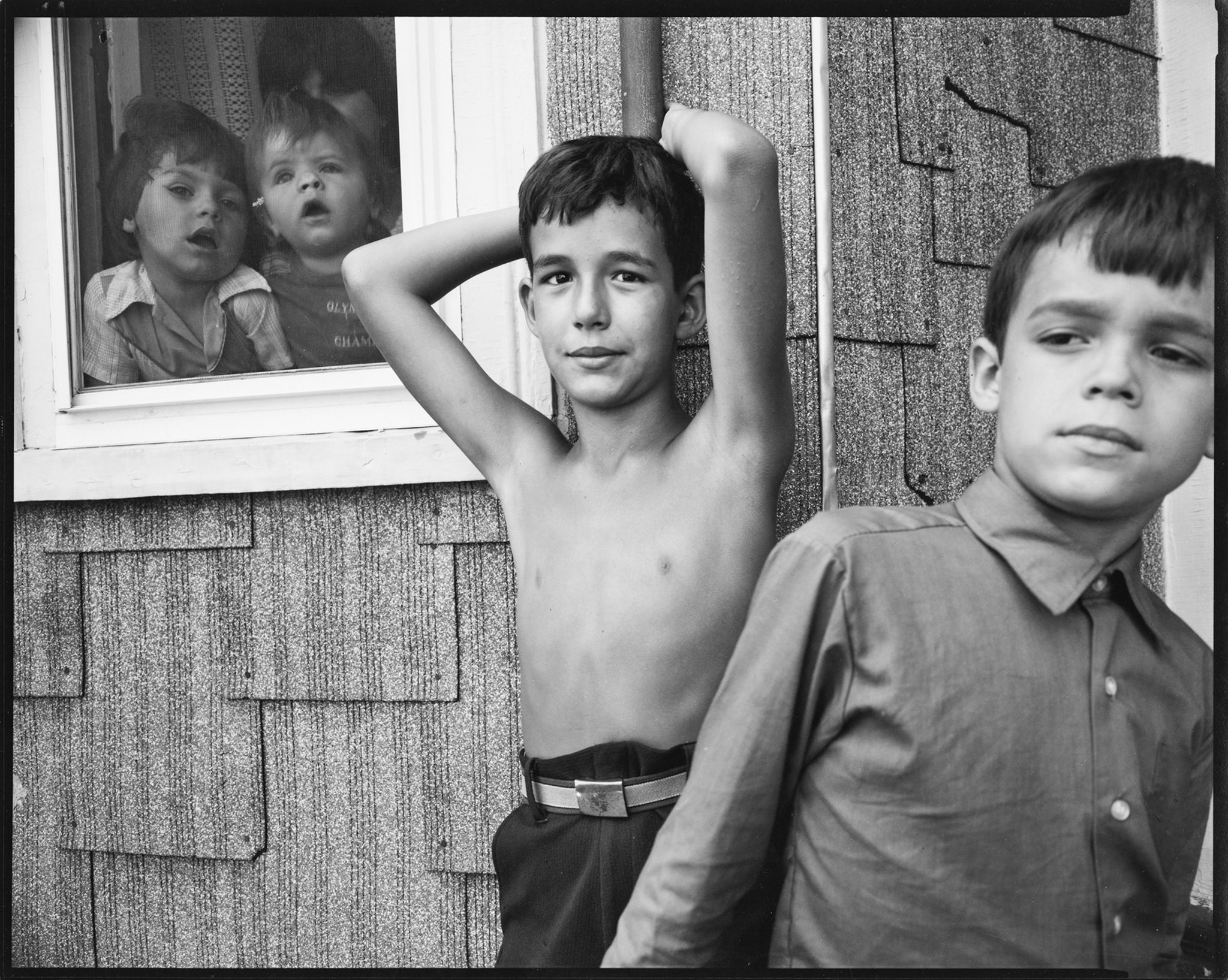 “In front of the Louvre spring hollyhocks, light as poles, noble and graceful as columns, blushing like young girls. »Did this sentence by Proust, taken from Regrets, reveries color du temps, inspire the choice of the cover for the first monograph in French by photographer Nicholas Nixon? Proud hollyhocks spring up there, the rendering is of such finesse that the crumpled silk petals seem to tremble in a light breeze. The effect is even more striking in front of the print exhibited in Toulouse where the gallery of the Château d’eau presents a retrospective of the American photographer. The circulatory ambulation opens with his most famous series: The Brown Sisters. Four young girls in their twenties face the camera, in jeans, arms crossed or hands in pockets, gazing into the eye of the camera. Mistrust, boredom, amusement or questioning can be read on their faces. The following year, the four of them wear a dress, light smiles open their faces, the shadow of the photographer looms among these young girls in bloom.

For nearly five decades, Nicholas Nixon has had his wife Beverly, nicknamed Bebe, pose each year, surrounded by her sisters, for a frontal portrait in black and white. Since 1975, the device has been the same: the four sisters, always placed in the same order, face the lens of the photographic chamber. The photographer does not give them any other information, the poses vary, the clothes change, they stare at the camera or not, only Baby never takes her eyes off it. Over the years, the passage of time is inscribed on their faces, the photographer tightens his plan, the sisters become closer inside the frame, like the links that unite them. Nicholas Nixon, present at the opening, took a gift in his luggage: the very last portrait of the series, taken in 2021. This series of 47 photographs, shown in their entirety for the first time, makes the temporal dimension of our images perceptible to us. human lives, a theme so dear to Proust, of which Richard Nixon is a keen reader. Born in 1947 in Detroit, he began with literary studies before turning to photography, after his discovery of Henri Cartier-Bresson. Rather than the idea of ​​the decisive instinct dear to the French photographer, it is to his formal mastery that he refers: “It is through form that we reach meaning. It was during his work on the architecture and urban landscapes of the East Coast that he traded his Leica for a camera, a large format camera allowing perspective corrections and a great wealth of detail. Distancing himself from the American documentary school, he got closer to the human at the end of the 1970s. His series of families taken under the porch of their house combines a very precise sense of framing with snapshots of life, a challenge to be carried out with a device of imposing dimensions and a long pause time.

Highly formal, Nicholas Nixon nonetheless takes an empathetic and infinitely respectful outlook on his subjects: his series on couples, that on very old people or that on AIDS patients that he accompanies until at their last breath are overwhelming with modesty and emotion. Each subject approached is an opportunity to ask the question of the right distance: self-portraits, still lifes, family intimacy, glances that exchange, hands that caress and console … “If you accept darkness, light becomes a present », Specifies the one who makes his own prints, in which he declines all the subtlety of grays to render with infinite softness the velvety of a skin, the chubby of a baby, the fluffy neck of a child or the hollow cheeks of an old man.

“El Chamuco” fell, allegedly involved in the massacre of the LeBarón-Langford family